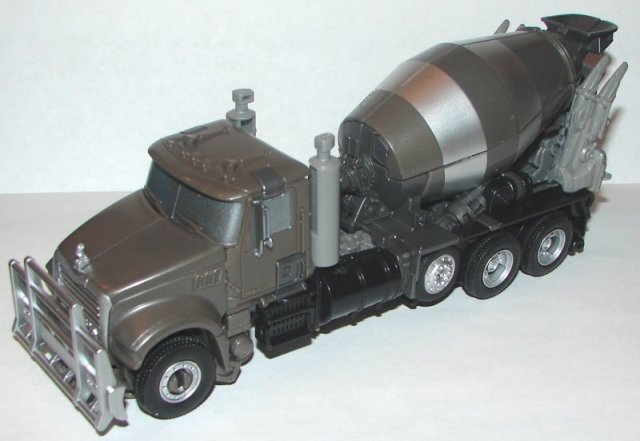 Vehicle Mode: Mixmaster’s cement mixer mode is pretty much perfect. I suppose they could have better hidden his claws that sit on ether side of the back of the truck, but they don’t look that out of place. His paint job is great, if a bit monochrome, but he’s a cement truck, it’s not like he should have a lot of flashy colors, and it is accurate to the movie.

Robot Mode: In robot mode Mixmaster is nowhere near as bizarre as Hightower, but he isn’t my favorite design. His smokestacks that stick out to each side of his chest don’t actually connect to anything, nor do they lock in place. His arms are too long, and I hate his hands. He’s not awful, and to my recollection, pretty screen accurate. Having said all that, my biggest complaint about Mixmaster is that he has no weapon, like most of his Studio Series Constructicon comrades.

Overall: I can’t wait for Devastator! Mixmaster looks great, but being part of Devastator makes him and absolute must have.

I’m 36 years old, and I work in network tech support for a public school system. I am a huge fan of Star Trek, Transformers, Harry Potter, and Marvel Comics as well as numerous other fandoms. I’m a big sports fan, especially the Boston Red Sox and the New England Patriots. I collect toys (mostly Transformers but other stuff too), comic books, and Red Sox baseball cards. I watch an obscene amount of television and love going to the movies. I am hopelessly addicted to Wizard Rock and I write Harry Potter Fanfiction, though these days I am working on a couple of different original YA novels.
View all posts by lmb3 →
This entry was posted in Toy Reviews, Toys, Transformers and tagged Constructicon Mixmaster, Devastator, Long Haul, Revenge of the Fallen, Studio Series, Toys, Transformers, Transformers Revenge of the Fallen, Transformers Studio Series. Bookmark the permalink.