Blog #1452: Artifact of the Week: Transformers: Generation One Audiobook The Battle for Planet Earth

Transformers: Generation One Audiobook The Battle for Planet Earth 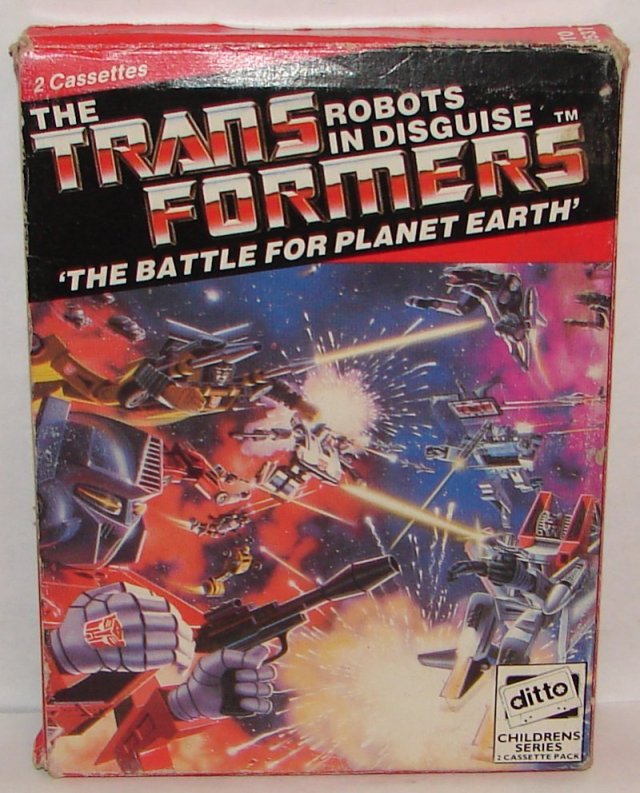 I picked this audiobook up a long time ago, but just recently I found a set that included the cardboard box they came in. I believe it was available in the UK and it’s dated 1985. It was manufactured by Pickwick International.

It’s a two cassette set. The individual boxes are identical on the outside, but the j-card (for anyone not old enough to remember audio cassettes, that’s what they call the cardboard insert inside an audio cassette box) shows the names of the individual stories. Volume 1 includes “Terror on Mount Sheelah” and “Bumblebee to the Rescue”. Volume 2 includes “Menace at the Dam” and “Espionage!!!!”.

I haven’t listened to them myself, but according to TFWiki.net they have a single narrator rather than a full cast of voice actors like the audio versions of the Ladybird Books Transformers stories. Pickwick International collaborated with Ladybird Books on those. (I will have to do a blog on the Ladybird Transformers books sometime.) The four stories are available on YouTube if you want to listen to them.

Bumblebee to the Rescue

Menace at the Dam

As always, you can find over 15,000 Transformers artifacts from every Transformers series and generation at TFMuseum.com.

I’m 36 years old, and I work in network tech support for a public school system. I am a huge fan of Star Trek, Transformers, Harry Potter, and Marvel Comics as well as numerous other fandoms. I’m a big sports fan, especially the Boston Red Sox and the New England Patriots. I collect toys (mostly Transformers but other stuff too), comic books, and Red Sox baseball cards. I watch an obscene amount of television and love going to the movies. I am hopelessly addicted to Wizard Rock and I write Harry Potter Fanfiction, though these days I am working on a couple of different original YA novels.
View all posts by lmb3 →
This entry was posted in Toy Reviews, Toys, Transformers and tagged Audiobook, Book on Tape, Bumblebee to the Rescue, Cassette, Espionage!!!!, Generation 1, Generation One, Menace at the Dam, Terror on Mount Sheelah, The Battle for Planet Earth, Toys, Transformers. Bookmark the permalink.