“So disappointing.” – Megatron, “Transformers: Revenge of the Fallen”

He was talking about Starscream. It’s just as true of this toy.

Vehicle Mode: His jet mode doesn’t look bad, but even with his landing gear down, the jet does not sit flat. It points down into the ground. All they had to do was make his landing gear longer. 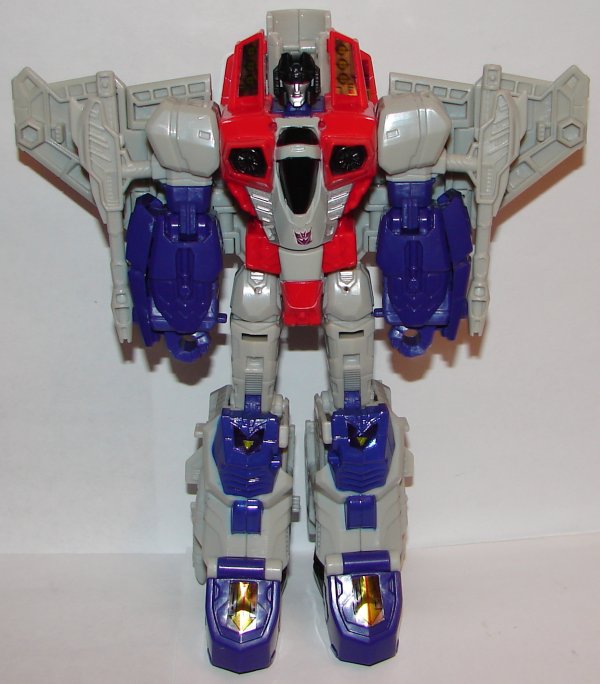 Robot Mode: In robot mode he looks like garbage. It’s like they were designing him for the Playskool Gobots line with huge feet and huge forearms. He looked better in picks than when I actually got him in hand. He’s just not very good. I don’t like the head sculpt. Hasbro needs to figure out how to put stickers on. They are all over the place. His guns suck. They are nearly flat. Could have put the plastic from the idiotic brick he comes with into making his guns look better.

Overall: As of right now, there is no combiner team for Starscream. Other than Blackwing and Dreadwind, there are no other deluxe Decepticons that have been announced. (I do not count the Terrorcons, because they have their own team.) If Hasbro were smart (they would never have released this awful toy) they would release deluxe versions of Skywarp and Thundercracker using the Starscream head that was released in Japan. That would be a pretty great combiner team of the original three jets plus Blackwing and Dreadwind. Time will tell. As to this hunk of crap, he’s for completists only. Its rare that I don’t want a Starscream repainted as Thundercracker and Skywarp, but if I have to buy another one of this mold I will throw up in my mouth. They have raised prices and decreased quality. Fuck you Hasbro.