Regardless of anything negative I say about this toy, it is a million times better than MP-05 Megatron.  Still not perfect, but an amazing improvement.

Megatron comes with three additional faces.  These are his angry and happy faces.

Megatron looks great in gun mode.  Unfortunately, he is still bigger than a real Walther P-38.  He’s not as big as MP-05, but it’s still too big.  I suppose this is probably the best they can do to give him an accurate robot mode, but I really wish it was actual size.  Other than that he looks amazing.

Unfortunately he has one major design flaw.  When you put on his black barrel and take it off it wears the  paint off the end of the gray barrel.  I don’t know how they could screw this up.  Inside the black barrel there should have been a peg to go inside the gray barrel to secure it.  Instead (or in addition) it’s the opposite.  I only put it on and took it off once and the paint wear was noticeable.  It’s pretty unforgivable to allow this to hit the market with this problem.  Takara is usually better than this.

His accessories can combine into a free standing cannon like the G1 toy.  Neat feature. 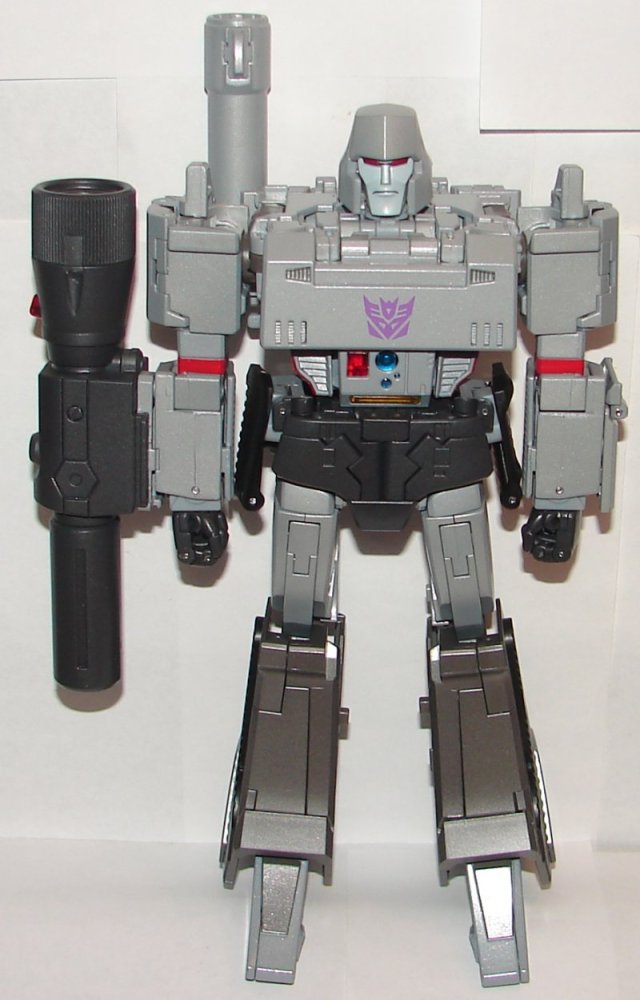 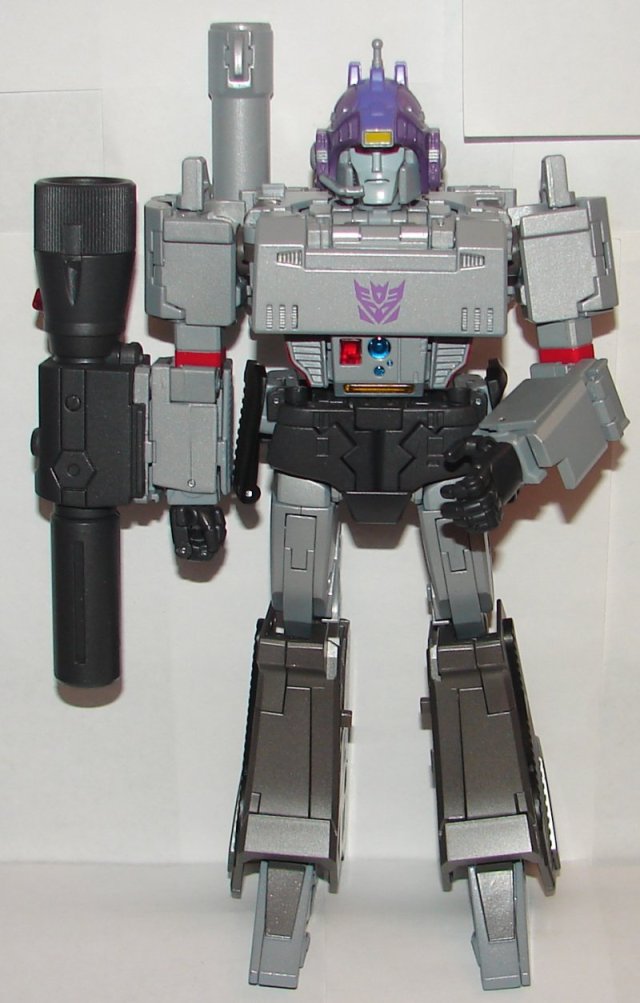 In the episode A Prime Problem, Megatron makes a clone of Optimus Prime that he controls with this helmet.

One of Megatron’s most iconic weapons is the mace.  He wielded it in More Than Meets The Eye in his battle with Optimus Prime on the dam.  In addition to the small chain, he also include a more sold jointed chain that can attach the mace.

Megatron comes with a die cast Key to Vector Sigma.

Megatron’s extended barrel and scope can be configured into a shoulder mounted cannon.  I can’t recall the origin of this, but I know I’ve seen it somewhere. 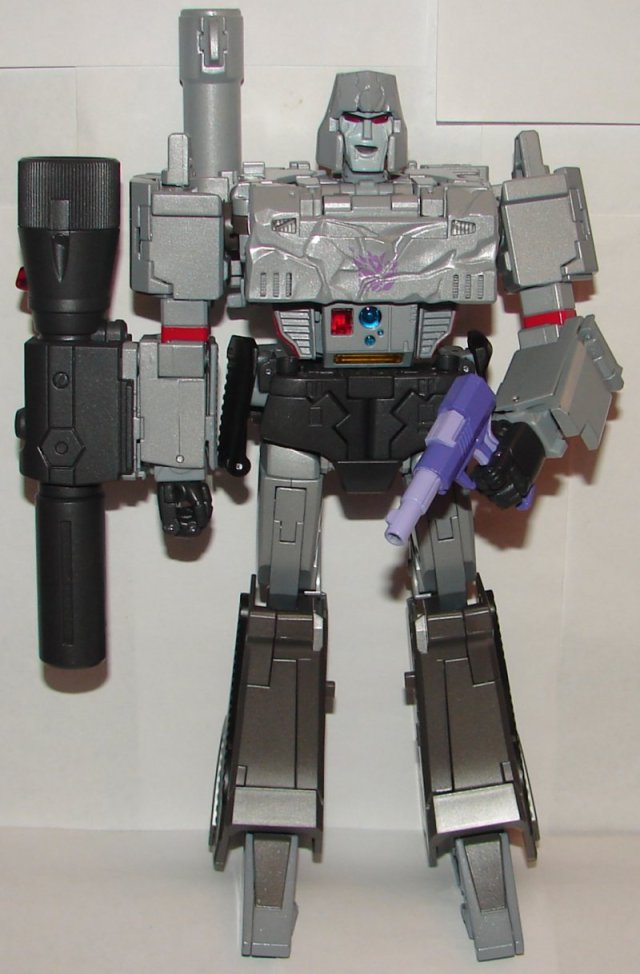 These are my favorite of his accessories.  Megatron comes with the sword he used in the battle of Autobot City against Optimus Prime as well as a battle damaged chest and face and the gun with which he killed Optimus Prime.  It is unfortunate that there is no battle damaged version of MP-10 Optimus Prime to fully recreate that iconic scene.

One thing I didn’t mention earlier is Megatron’s transformation.  It is complex, and frankly, I doubt I could ever do it without the instructions.  The instructions even try to hide it by listing 15 steps, but each step includes multiple steps.  I counted them up.  Transforming him takes 107 steps.  I am fairly certain that makes him the most complicated Transformers ever.

Overall: I know there are three different MP scale third party Megatrons that have come out.  I don’t have any of them, and I always prefer the official stuff, but with him being so complicated, so expensive, and with the flaws he has, you may wish to consider one of the third party Megatrons instead of this one.  They most likely have their own problems, but I don’t know.  Still, he will look amazing standing on your shelf, just don’t torture yourself by transforming him a lot.

I’m 36 years old, and I work in network tech support for a public school system. I am a huge fan of Star Trek, Transformers, Harry Potter, and Marvel Comics as well as numerous other fandoms. I’m a big sports fan, especially the Boston Red Sox and the New England Patriots. I collect toys (mostly Transformers but other stuff too), comic books, and Red Sox baseball cards. I watch an obscene amount of television and love going to the movies. I am hopelessly addicted to Wizard Rock and I write Harry Potter Fanfiction, though these days I am working on a couple of different original YA novels.
View all posts by lmb3 →
This entry was posted in Toy Reviews, Toys, Transformers and tagged Masterpiece, Masterpiece Megatron, Megatron, Toys, Transformers, Transformers Masterpiece. Bookmark the permalink.