I’m not sure who this toy is exclusive to.  It came from Entertainment Earth with an EE Exclusive sticker, but on the site it is listed as exclusive to Asia Kids day like the non-combining Protectobot sets from a couple years ago. 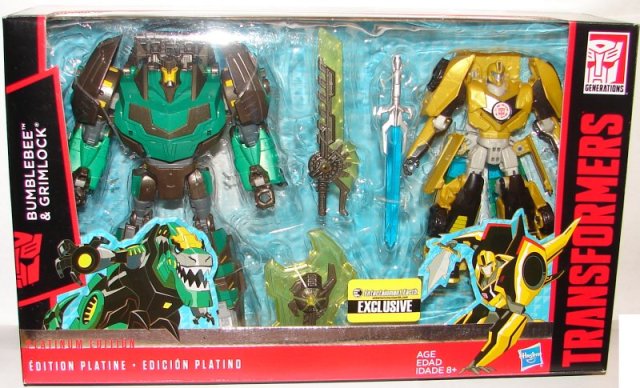 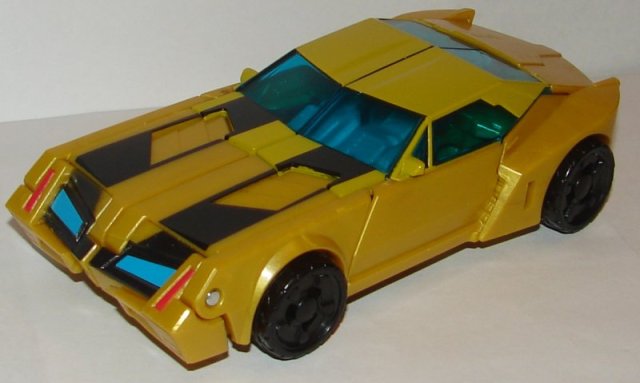 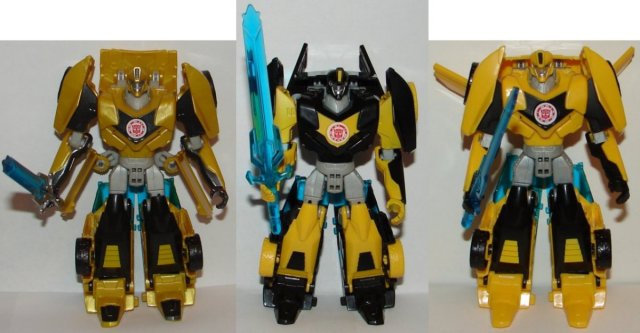 Bumblebee is a repaint of the original RID Warrior Class Bumblebee.  He’s done in metallic gold plastic which looks amazing.  He has some really nice paint detail, but they did a piss pour job matching the gold paint on his roof to the gold plastic.  It’s not even close.  They painted the hilt of his sword silver, which is more than I can say for the previous versions.  If they just had someone who wasn’t color blind match the paint for his roof, this would be the perfect RID Bumblebee.

This toy is the real reason to buy this set.  Grimlock is a remold, of Transformer Generations Voyager Fall of Cybertron Grimlock.  He’s almost completely remolded.  His dinosaur lower legs/robot forearms are about the only thing that is the same as the original.  This is probably the best version of RID Grimlock we’re going to get.

Overall: If you haven’t picked up the Japanese version of Grimlock, then this is an absolute must.  At $60, it’s pretty reasonably priced, which is unusual for a Platinum Edition toy.

I’m 36 years old, and I work in network tech support for a public school system. I am a huge fan of Star Trek, Transformers, Harry Potter, and Marvel Comics as well as numerous other fandoms. I’m a big sports fan, especially the Boston Red Sox and the New England Patriots. I collect toys (mostly Transformers but other stuff too), comic books, and Red Sox baseball cards. I watch an obscene amount of television and love going to the movies. I am hopelessly addicted to Wizard Rock and I write Harry Potter Fanfiction, though these days I am working on a couple of different original YA novels.
View all posts by lmb3 →
This entry was posted in Toy Reviews, Toys, Transformers and tagged Bumblebee, Fall of Cybertron, Generations, Grimlock, Platinum, Platinum Edition, Platinum Series, Robots in Disguise, Toys, Transformers, Transformers: Platinum Edition, Transformers: Platinum Series, Transformers: Robots in Disguise. Bookmark the permalink.