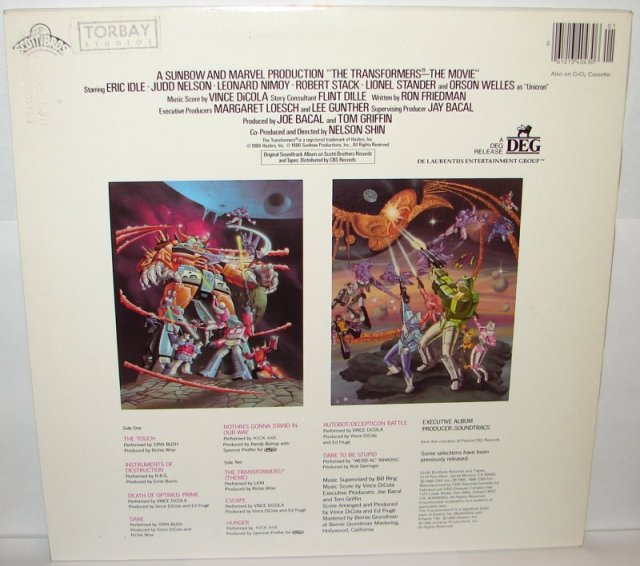 Before you read this, you’ll want to read my original post about the various editions of The Transformers: The Movie Soundtrack.  Much of that focuses on the Record version, especially the promotional version I found.  I’ve found another promo version, this one from Canada, but there are a couple of interesting, as well as odd, things about it.

The picture above shows the track listing and artists/bands for the songs from the front cover.  Notably, and highlighted in the red boxes, instead of Spectre General being listed as the band for Hunger and Nothin’s Gonna Stand in Our Way, it lists Kick Axe.  Now, if you aren’t aware, Kick Axe IS Spectre General.  They did the songs under the name Spectre General because there was some legal issue, I don’t know what, to using Kick Axe in the USA.  However, until I saw this promotional copy of the record, I did not think Hunger and Nothin’s Gonna Stand in Our Way were ever attributed to Kick Axe on any Transformers Soundtrack release (more on that later).

Pictured above, on the back upper left corner of the cover are some interesting logos.  The Scotti Brothers logo is in black.  On the USA regular and promo versions I have the logo is in color.  I have no idea what Torbay Studios is, but it looks like it’s either a label or a rubber stamp with a piece of clear tape over it.

Along the side is an impression stamp that says “Demonstration Not For Sale”.

Also of note is that the barcodes are different.  The Canadian Promo version is taller than that USA one. 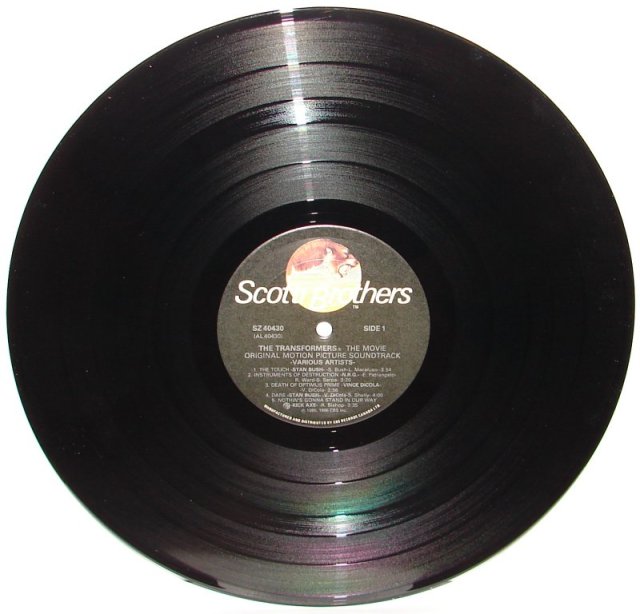 The record labels themselves are pretty much what you expect.  They say Manufactured and distributed by CBS Records Canada, as opposed to giving the address in New York for the USA version.

What does all this mean?  Maybe nothing.  However, this is the first time I have ever seen the name Kick Axe associated with Transformers on any official item.  I searched online for the soundtrack record and looked at dozens of photos of the album cover and could not find a single one with Kick Axe on the cover.  So, that leaves two possibilities.

1. That there is a rare (probably) Canadian version of The Transformers: The Movie Soundtrack Record (and probably the cassette too) that lists Kick Axe instead of Spectre General on the cover and label, and that this is just one of those used as a demo.

2. This cover was printed as a prototype or pre-production sample before the name change was made (which would be really cool).

Which one it is?  I have know idea.  I guess I’d ask that if anyone out there has a copy of the movie soundtrack, record of cassette, from Canada and it has Kick Axe listed instead of Spectre General, please send me a photo.

As always, you can find over 9000 Transformers merchandise items and collectibles at TFMuseum.com.  I have not done an update to the site in a while.  Hopefully I will be doing a major update this winter with more than 1500 more items including a huge number of Age of Extinction items.

I’m 36 years old, and I work in network tech support for a public school system. I am a huge fan of Star Trek, Transformers, Harry Potter, and Marvel Comics as well as numerous other fandoms. I’m a big sports fan, especially the Boston Red Sox and the New England Patriots. I collect toys (mostly Transformers but other stuff too), comic books, and Red Sox baseball cards. I watch an obscene amount of television and love going to the movies. I am hopelessly addicted to Wizard Rock and I write Harry Potter Fanfiction, though these days I am working on a couple of different original YA novels.
View all posts by lmb3 →
This entry was posted in Transformers, Transformers Artifact of the Week and tagged Record, Toys, Transformers, Transformers: The Movie, Writing. Bookmark the permalink.