I don’t know anything about this.  It was cheap, only $5 and I was placing an order with Robot Kingdom, so I grabbed it.  It is now out of stock.

Since it says “Not for Sales” on top, we can conclude this is probably a foreign item, and was likely a give away with a purchase. 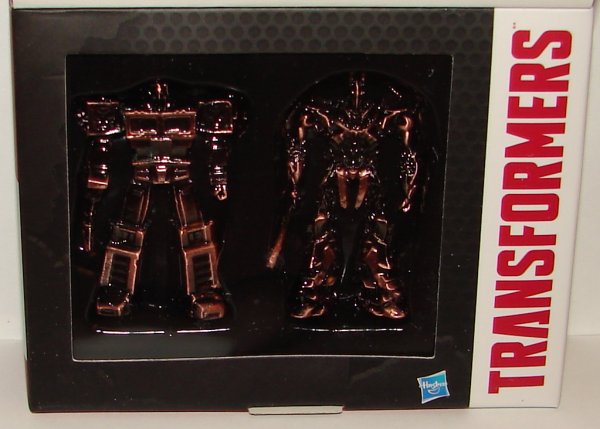 Inside there are two small metal statues, just a couple inches tall each.  One is G1 Optimus Prime, the other is AOE Optimus Prime.  A cool item for $5.  I wish I knew how and where it was released.

As always, you can find over 9000 Transformers merchandise items and collectibles at TFMuseum.com.  I have not done an update to the site in a while.  Hopefully I will be doing a major update this winter with more than 1500 more items including a huge number of Age of Extinction items.

I’m 36 years old, and I work in network tech support for a public school system. I am a huge fan of Star Trek, Transformers, Harry Potter, and Marvel Comics as well as numerous other fandoms. I’m a big sports fan, especially the Boston Red Sox and the New England Patriots. I collect toys (mostly Transformers but other stuff too), comic books, and Red Sox baseball cards. I watch an obscene amount of television and love going to the movies. I am hopelessly addicted to Wizard Rock and I write Harry Potter Fanfiction, though these days I am working on a couple of different original YA novels.
View all posts by lmb3 →
This entry was posted in Transformers, Transformers Artifact of the Week and tagged Age of Extinction, AOE, Optimus Prime, Statue, Transformers, Transformers: Age of Extinction. Bookmark the permalink.