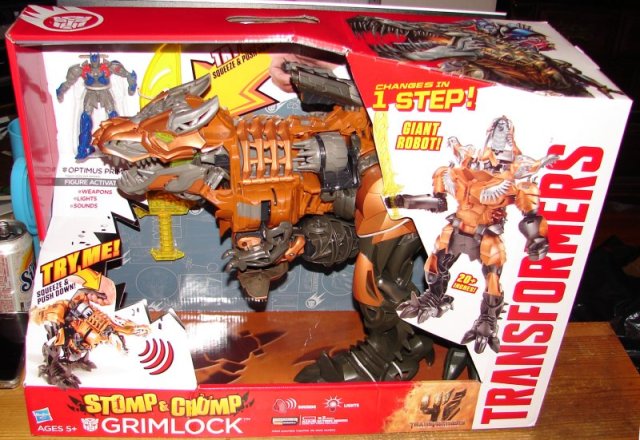 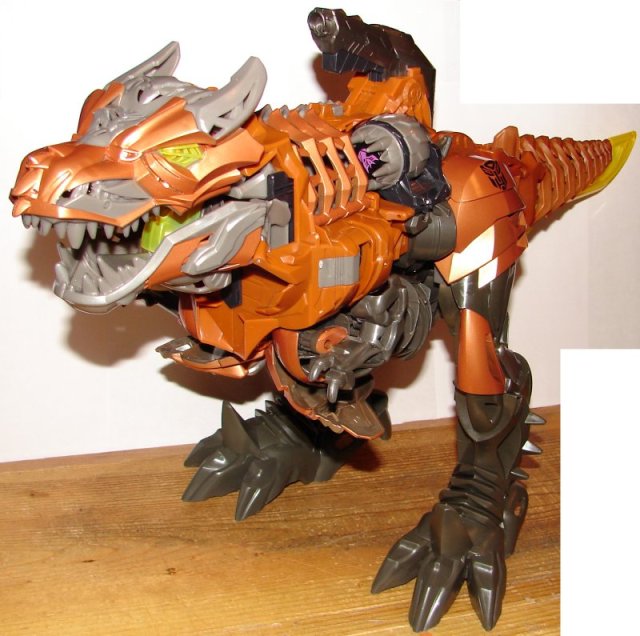 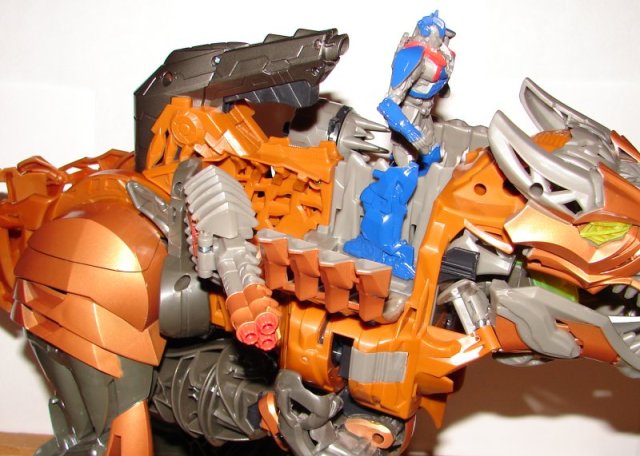 This is not a toy that collectors are going to love, it’s enormous, has limited articulation, and is really expensive at $80.  Having said that, I promise you that come Christmas, kids are going to LOVE this one.  If I had this when I was eight, I would have played with it morning, noon, and night.

You push the handle on his back (holding the button) forward so his jaws open, he roars, and his eyes light up in different colors.  It’s awesome.  You also pull back on the handle to transform him.  He has an enormous sword stowed beneath his tail.  In dinosaur mode you open a compartment on his back and stand the Optimus Prime figure there.  Magnets in his feet hold him in place and operate a flip out cannon that spins on the left and a longer barrel gun that unfolds on the right.

He does have a couple of design flaws.  The one step transformation means his arms can’t get pegged in under his dinosaur body.  If they are slightly misaligned you can’t tilt him forward.  They are easily pushed back in place, but it’s a bit annoying.  Also, the whole “One Step Transformation” gimmick isn’t completely true.  When converting to dinosaur mode, his lower jaw halves need to be pegged together.  It’s a really small thing, but he is either one step or he isn’t.

Overall:  I really can’t say I have any regrets on buying this toy even with the steep price tag.  He is just so cool, and in some ways reminds me of the good old days when toys stood up without spending an hour aligning a dozen joints.  I would say wait for clearance, but I think they will fly off the shelves at Christmas, though holiday sales on this one seem likely.

I’m 36 years old, and I work in network tech support for a public school system. I am a huge fan of Star Trek, Transformers, Harry Potter, and Marvel Comics as well as numerous other fandoms. I’m a big sports fan, especially the Boston Red Sox and the New England Patriots. I collect toys (mostly Transformers but other stuff too), comic books, and Red Sox baseball cards. I watch an obscene amount of television and love going to the movies. I am hopelessly addicted to Wizard Rock and I write Harry Potter Fanfiction, though these days I am working on a couple of different original YA novels.
View all posts by lmb3 →
This entry was posted in Toy Reviews, Toys, Transformers and tagged Age of Extinction, AOE, Grimlock, One Step Changer, One Step Changers, Optimus Prime, Stomp & Chomp Grimlock, Stop & Chomp, Toys, Transformers, Transformers: Age of Extinction. Bookmark the permalink.