Transformers Go is the new Japanese cartoon (I believe it’s all new animation) that uses the Transformers Prime Beast Hunters toy designs along with a few new additions (and some new heads for the Predacons).  The Samurai Team, Kenzan, Jinbu, and Ganoh are one of the two new combiner teams.

Before I get to the toys, it should be noted that these toys look a lot more like Brave toys than Transformers.  This doesn’t bother me as long as they are well done, but they do look completely out of place next to Beast Hunters toys.

Vehicle Mode: Kenzan’s futuristic police car mode is awesome.  I didn’t have any batteries handy, so I’m not sure the extent of his light and, I think, sound capabilities, but he is supposed to have them.  Each toy has an accessory that includes their combiner robot head folded up.  In vehicle mode Kenzan’s mounts on his roof as a weapons pack.  Looks okay, but it’s nothing special. 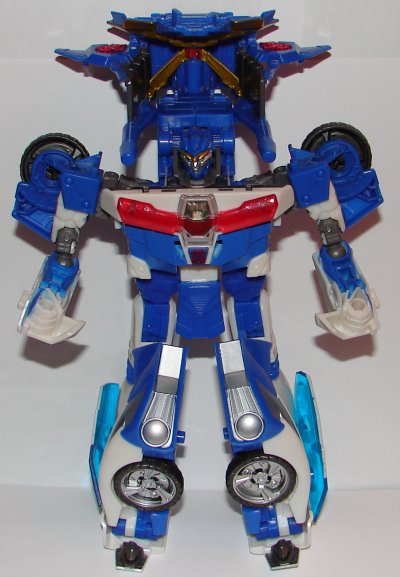 Robot Mode: All three robot modes suffer from the same design problem.  Their legs go all the way up to their chests.  There is no lower torso.  It doesn’t look so bad on Kenzan because his upper legs are the same colors as his chest, and a piece hangs down making it look like he has a lower torso.  His swords can be stowed on his back as shown above, and his weapon pack can mount up on his back.  This looks better than it does in car mode.  They aren’t in the picture, but when the weapons pack is in place, his swords can attach to the backs of his shoulders.

Combined Mode: I don’t know if there is any name for any of these combiners.  This one with Kenzan as the head and shoulders is probably the best of them, as Ganoh makes fro the best legs.  It’s in the combined modes that they really don’t look like Transformers. 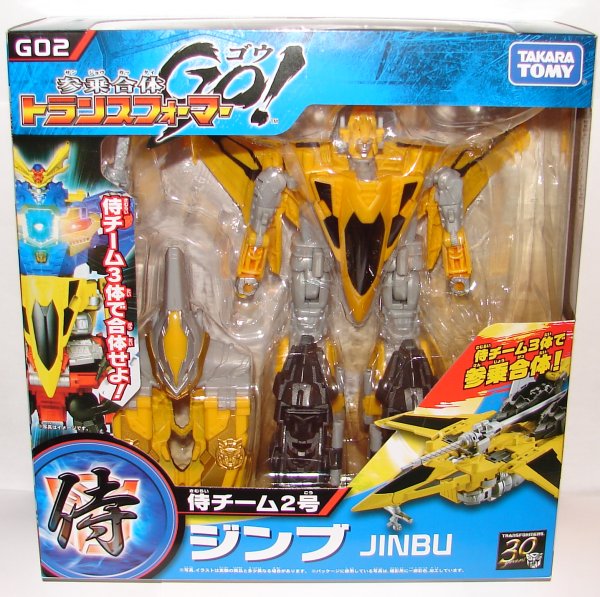 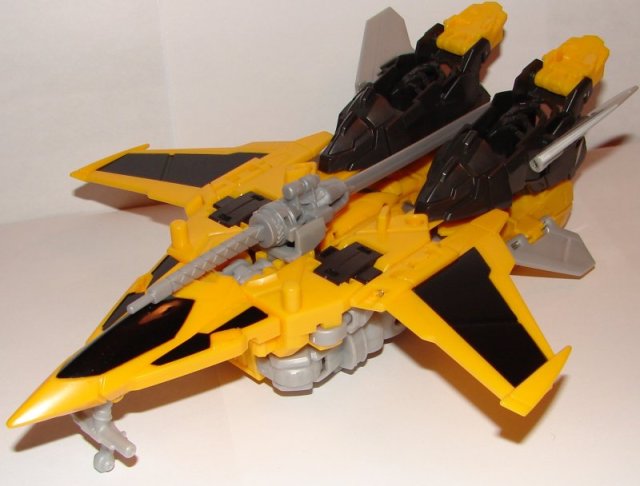 Vehicle Mode:  I really like Jinbu’s jet mode.  The sword looks just enough like a cannon on the top of the jet.  His weapon pack sort of has a gun on top, but it really doesn’t look that great. 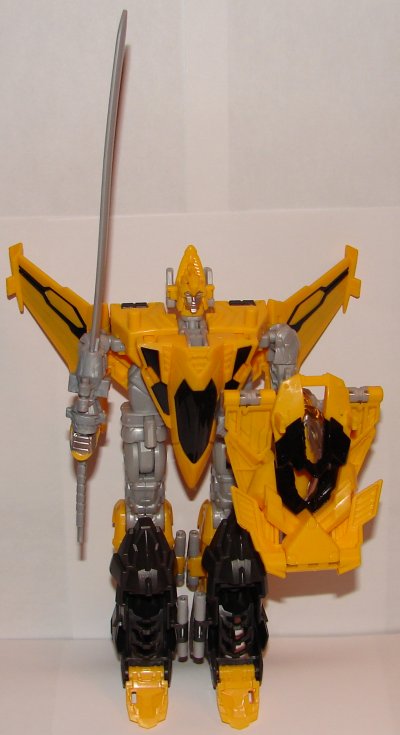 Robot Mode: Since Jinbu’s legs are all gray from his thighs up, you can see how they go right up to his chest with no lower torso.  He looks more than a little ridiculous.  His weapon pack folds into a backpack. 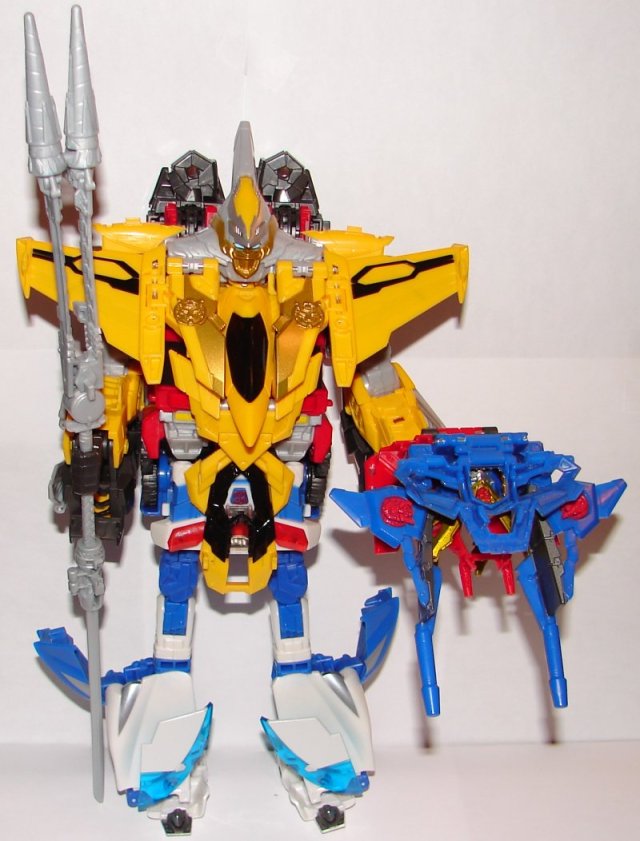 Combined Mode: While Jinbu’s robot mode has too little torso, his combined mode has a torso that is way too tall, with really thin short thighs, thick lower legs, and tiny feet.  Bizarre is the only way I can describe him. 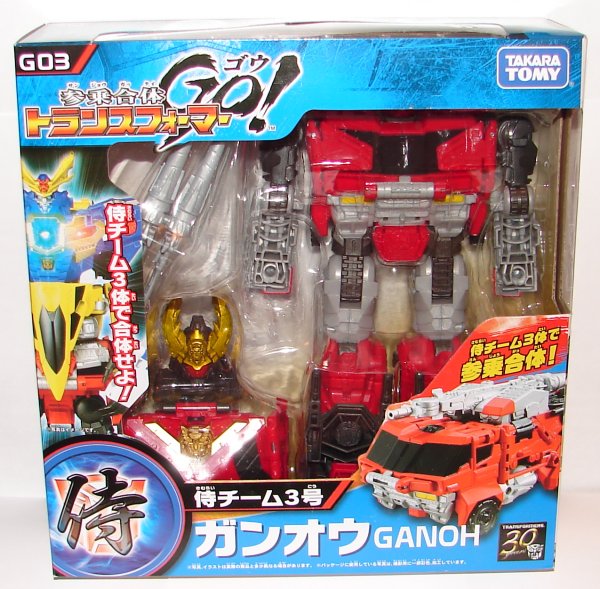 Robot Mode: Ganoh has the same problem as the others, his legs go all the way up to his chest.  However, he looks an awful lot better than Jinbu.  His weapon can be stored on his back in two different configurations.  The vertical storage is with his weapon pack, which he can use as a hand weapon also. 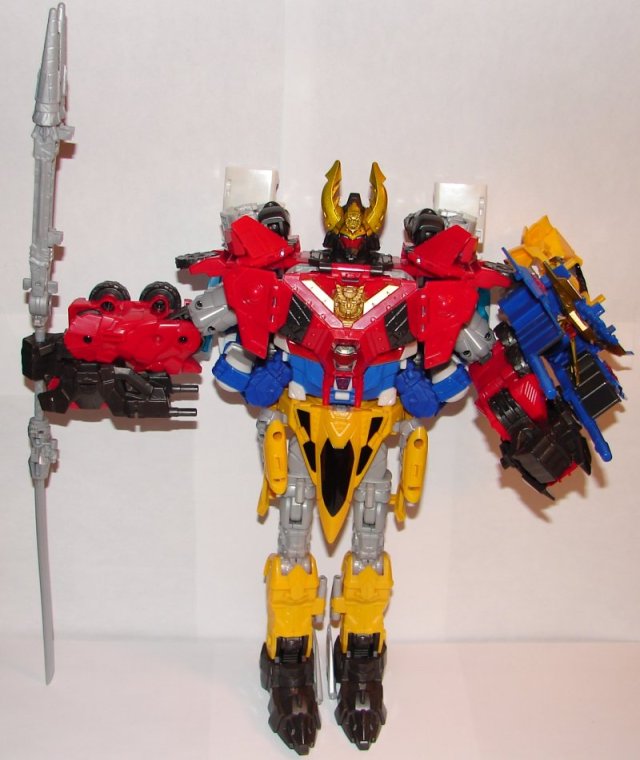 Combined Mode: This combined mode is a mixed bag.  His legs seem too tall and thin, but it works a lot better than Jinbu’s combined mode, but not as good as Kenzan’s.  His worst problem is that with Kenzan forming the middle of his torso, his legs stick out to the side, so Ganoh’s robot arms have to stay out to his side.  They also don’t bend very well.  Put those issues together and you can see why he has to hold the spear like that.

Overall:  It’s a forgone conclusion that we aren’t getting these toys in the USA.  They aren’t bad, but with as expensive as they are, I’m not sure they’re worth it.  A lot of it has to do with how you feel about Brave toys.  If you really like the look of those, you’ll probably like these a lot more than if you don’t.

I’m 36 years old, and I work in network tech support for a public school system. I am a huge fan of Star Trek, Transformers, Harry Potter, and Marvel Comics as well as numerous other fandoms. I’m a big sports fan, especially the Boston Red Sox and the New England Patriots. I collect toys (mostly Transformers but other stuff too), comic books, and Red Sox baseball cards. I watch an obscene amount of television and love going to the movies. I am hopelessly addicted to Wizard Rock and I write Harry Potter Fanfiction, though these days I am working on a couple of different original YA novels.
View all posts by lmb3 →
This entry was posted in Toy Reviews, Toys, Transformers and tagged Ganoh, Jinbu, Kenzan, Samurai Team, Toys, Transformers, Transformers Go. Bookmark the permalink.