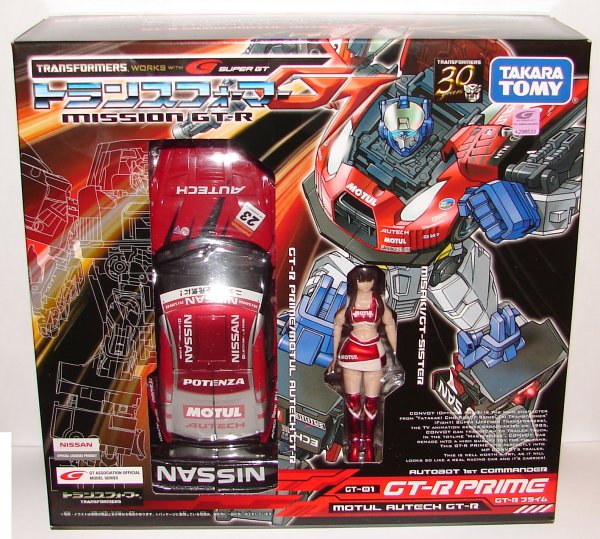 A new series from TakaraTomy, Transformers GT includes accurate (I assume) race cars from the Japanese Super GT Racing circuit.  All the toys in this line are heavily remolded versions of the Transformers Alternity Optimus Prime.

Each toy includes a female action figure, which is unfortunately, not to scale with the cars.  They include a number of extra hands.  I’m not sure if they are supposed to represent any real person or not.

The original toy did not (I believe) have any weapons.  Optimus Prime’s weapon (left) is kind of plain.  It’s a little short gun with no paint apps.  On the other hand, Star Saber’s sword looks fantastic with the translucent blue blade and red and dark gray.  Unfortunately, Star Saber can only hold the sword like a gun.  Not terrible, but they should have molded it differently.

Vehicle Mode: As you can see in the comparison picture, the body of the car has been completely remolded and is nearly unrecognizable beside the original Alternity Optimus Prime.  When I first looked at it, I wasn’t 100% sure it was remolded from Prime, but the insides are pretty much identical.  Even the hubcaps have been remolded.  Both cars have lots of paint apps.  I don’t recognize all the company logos, but many of them are most likely from Japan.  Really great looking toys. 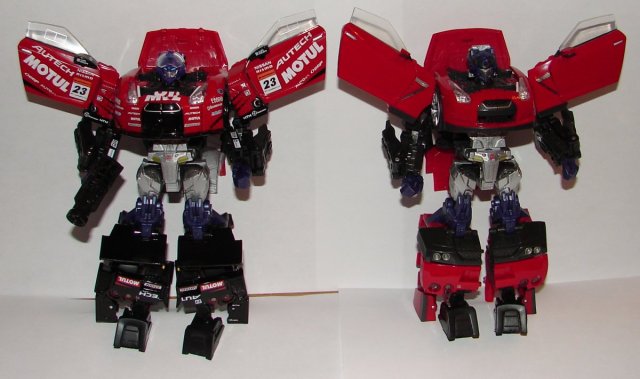 Robot Mode: The only molding difference between the two toys is the head.  Optimus has new head compared to the original Alternity toy.  I love the head sculpts.  As they are supposed to be race cars, both heads have a microphone molded onto them.  Very cool.

Overall: These toys look really cool, but they seem awfully expensive to me at $115 each.  The next ones coming out are Megatron and Fortress Maximus.  It remains to be seen if more Autobot and Decepticon commanders will follow.

I’m 36 years old, and I work in network tech support for a public school system. I am a huge fan of Star Trek, Transformers, Harry Potter, and Marvel Comics as well as numerous other fandoms. I’m a big sports fan, especially the Boston Red Sox and the New England Patriots. I collect toys (mostly Transformers but other stuff too), comic books, and Red Sox baseball cards. I watch an obscene amount of television and love going to the movies. I am hopelessly addicted to Wizard Rock and I write Harry Potter Fanfiction, though these days I am working on a couple of different original YA novels.
View all posts by lmb3 →
This entry was posted in Toy Reviews, Toys, Transformers and tagged Alternity, Optimus Prime, Star Saber, Super GT, Toys, Transformers, Transformers GT. Bookmark the permalink.