Vehicle Mode: It’s hard to imagine liking a remolded from Optimus Prime Ultra Magnus better than the Ultra Magnus specific mold we got previously, but I do.  This Ultra Magnus is a pretty great toy.  As you can see from the picture, he’s got some new accessories, including the “Forge of Solus Prime,” incorrectly referred to on the box as the “Forge of Solus Battle Hammer.”  That doesn’t even make sense.  He’s had extensive mold modifications, which are less apparent in vehicle mode.  The most notable thing is the lack of smokestacks.  While pictured on the box, they were not included with the toy.  Also of note, while the sides of the rear cab use the USA Transformers Prime Voyager Optimus Prime Mold, the hood is from the Japanese version.  It has ports for Arms Microns.  Not sure why they did this, he really doesn’t have a weapon you could plug in there. 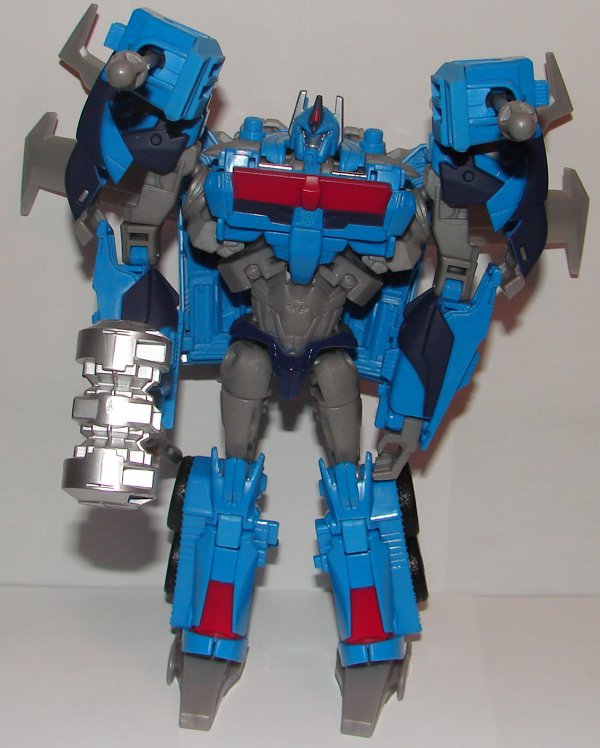 Robot Mode: In robot mode, he looks truly awesome!  The new head sculpt Is fantastic, and the shoulders having launchers built in was a nice touch, and very well engineered.  I would have preferred the Forge of Solus Prime be gold/orange like in the cartoon, but it still looks nice in silver.  I wish they had used that color for the handle as well, instead of leaving it as unpainted gray.  He could have used a few more paint apps on his torso and upper legs, but those are minor things.

I’m 36 years old, and I work in network tech support for a public school system. I am a huge fan of Star Trek, Transformers, Harry Potter, and Marvel Comics as well as numerous other fandoms. I’m a big sports fan, especially the Boston Red Sox and the New England Patriots. I collect toys (mostly Transformers but other stuff too), comic books, and Red Sox baseball cards. I watch an obscene amount of television and love going to the movies. I am hopelessly addicted to Wizard Rock and I write Harry Potter Fanfiction, though these days I am working on a couple of different original YA novels.
View all posts by lmb3 →
This entry was posted in Toy Reviews, Toys, Transformers and tagged Beast Hunters, Toys, Transformers, Transformers Prime Beast Hunters, Transformers: Prime, Ultra Magnus, Voyager. Bookmark the permalink.