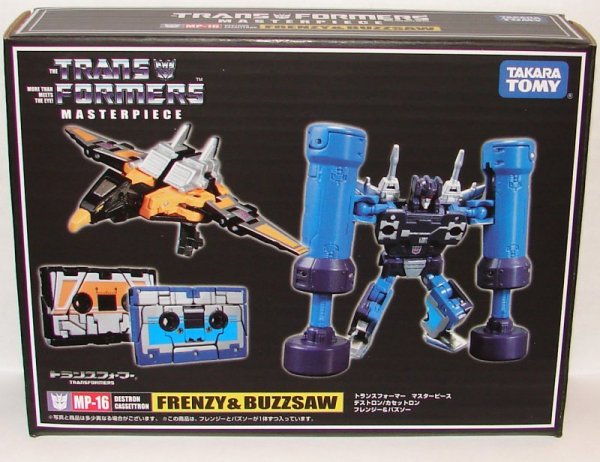 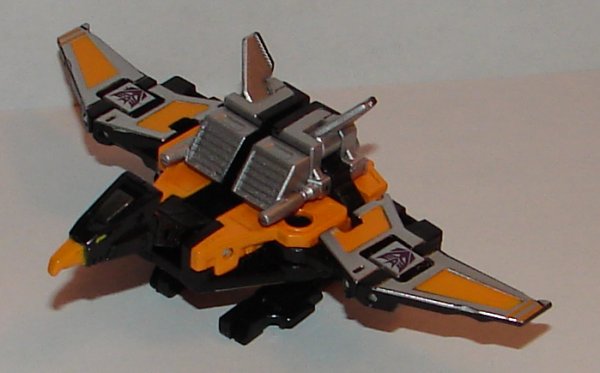 I really love this mold, and they did a great job of Buzzsaw’s coloring.  He looks great in orange.  For more on this mold, see my Masterpiece Soundwave/Laserbeak blog.

Let’s just get this out of the way.  He should be Rumble.  “FIRRIB Forever!”  (If you know what that means then you’re an old school Transformers fan like me.  I believe wars have been fought over less derisive issues than this.)  Frenzy comes with a ton of accessories.  I’ll go through all of them.  Most of this comes right from my Masterpiece Rumble blog, as the molds are identical. 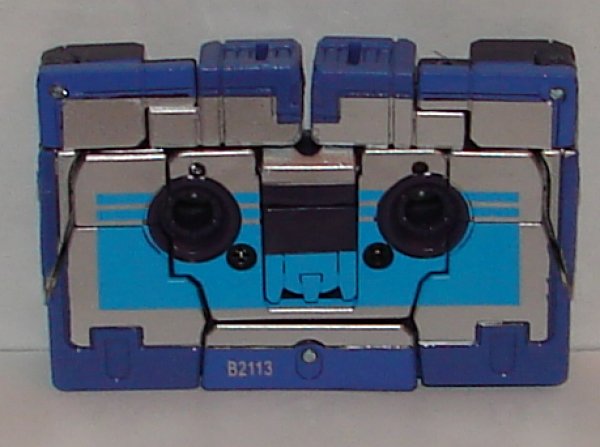 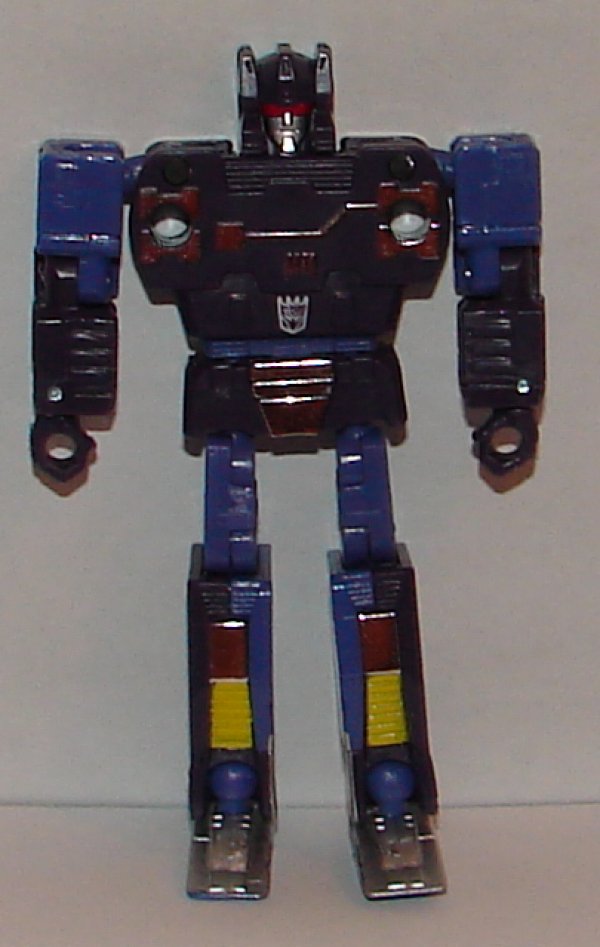 Frenzy, shown above in tape mode and in robot mode with his customary weapons, is absolutely amazing.  They really did an awesome job on him (accept that he should be Frenzy).

Not sure how well you can see it, but he’s got an accessory that attached on his lower back.  I’m not sure if this was from an episode of the cartoon, or they just had a piece that would fit there and said, “okay, we’ll put it there.”

The parts everyone has been waiting for, his pile drivers.  They can be stored on his back when not deployed.  When you do this, his weapons fit inside the pile drivers.  It’s a really neat design.  I did have a problem putting on his pile drivers.  Maybe the explanation of putting them on is in the Japanese text on the instructions, but when I put them on, they don’t lock into place.  They just fall right off.  I did figure out that if you put them on with his hand flipped out and then flip them part way in, they will lock into place.  I’m not sure if that’s how they are meant to work, but they do. with

They even took care of the issue of what to do with Frenzy’s accessories when in tape mode (though I didn’t get a picture, so I used the Rumble picture).  Using his pile drivers and Soundwave’s sensor, they can become the plug that Soundwave used to interface with computers in the G1 cartoon.  Very cool.  There is even a place on Soundwave’s back (inside his robot feet) that opens up to store Frenzy’s weapons.

I didn’t get a picture of it, but in robot mode, Soundwave can use Frenzy’s pile drivers as a double barrel cannon.

While the price is high, all the great accessories more than make up for it.

“Don’t you Auto-bozos know, hanging out in Central Park…” – Rumble
“…can be hazardous…” – Frenzy
“…to your health?” – Soundwave, Transformers, “City of Steel”

I’m 36 years old, and I work in network tech support for a public school system. I am a huge fan of Star Trek, Transformers, Harry Potter, and Marvel Comics as well as numerous other fandoms. I’m a big sports fan, especially the Boston Red Sox and the New England Patriots. I collect toys (mostly Transformers but other stuff too), comic books, and Red Sox baseball cards. I watch an obscene amount of television and love going to the movies. I am hopelessly addicted to Wizard Rock and I write Harry Potter Fanfiction, though these days I am working on a couple of different original YA novels.
View all posts by lmb3 →
This entry was posted in Toy Reviews, Toys, Transformers and tagged Buzzsaw, Frenzy, Masterpiece, Masterpiece Buzzsaw, Masterpiece Frenzy, Masterpiece Rumble, Rumble, Toys, Transformers, Transformers Masterpiece. Bookmark the permalink.