As I noted in my Masterpiece Soundwave & Laserbeak blog, there were rumors about a Masterpiece Acid Storm being released in Australia.  Those rumors appear to be true, as Acid Storm has now been confirmed as a Toys R Us exclusive in the USA.  In even bigger news, Masterpiece Soundwave will be released as a USA TRU exclusive as well, and will include all five of his tapes.  This is big news for anyone who didn’t want to spend nearly $300 to get them from Japan. 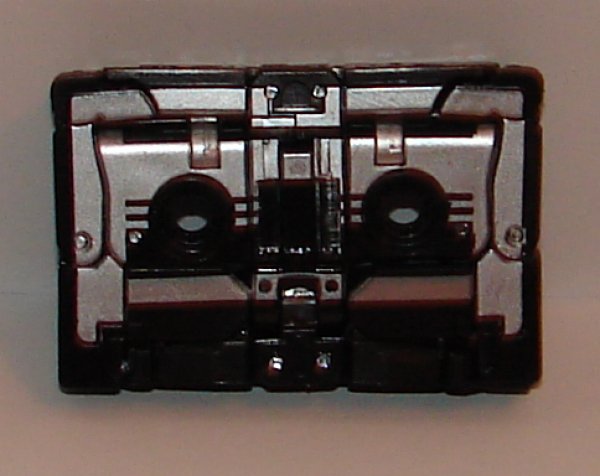 Ravage is pretty great.  I’m not sure I like him as much as Laserbeak, but they did a tremendous job.  His missile pods are integrated and while he doesn’t have a lot of paint, his paint apps are well done.  He looks like a perfect G1 Ravage.

Oddly he (and Rumble) comes with a pink cassette case.  Not sure why as all G1 cassettes came with clear cases as far as I know, but that hardly matters.  (And for anyone out there not old enough to remember what a cassette is, think of it as a low quality rectangular thick CD.)

The only bad here is the cost.  The set of Ravage & Rumble was $60 initially from the major online importers.  However, when you take into account all the accessories that Rumble comes with, the price is much easier to swallow.  Other than that, the lack of die cast metal bothers me a little, but I’m starting to get over that at this point.

Let’s just get this out of the way.  He should be Frenzy.  “FIRRIB Forever!”  (If you know what that means then you’re an old school Transformers fan like me.  I believe wars have been fought over less derisive issues than this.)  Rumble comes with a ton of accessories.  I’ll go through all of them.

Rumble, shown above in tape mode and in robot mode with his customary weapons, is absolutely amazing.  They really did an awesome job on him (accept that he should be Frenzy).

Not sure how well you can see it, but he’s got an accessory that attached on his lower back.  I’m not sure if this was from an episode of the cartoon, or they just had a piece that would fit there and said, “okay, we’ll put it there.”

The parts everyone has been waiting for, his pile drivers.  They can be stored on his back when not deployed.  When you do this, his weapons fit inside the pile drivers.  It’s a really neat design.  I did have a problem putting on his pile drivers.  Maybe the explanation of putting them on is in the Japanese text on the instructions, but when I put them on, they don’t lock into place.  They just fall right off.  I did figure out that if you put them on with his hand flipped out and then flip them part way in, they will lock into place.  I’m not sure if that’s how they are meant to work, but they do. with

They even took care of the issue of what to do with Rumble’s accessories when in tape mode.  Using his pile drivers and Soundwave’s sensor, they can become the plug that Soundwave used to interface with computers in the G1 cartoon.  Very cool.  There is even a place on Soundwave’s back (inside his robot feet) that opens up to store Rumble’s weapons.

I didn’t get a picture of it, but in robot mode, Soundwave can use Rumble’s pile drivers as a double barrel cannon.

While the price is high, all the great accessories more than make up for it.

“Don’t you Auto-bozos know, hanging out in Central Park…” – Rumble
“…can be hazardous…” – Frenzy
“…to your health?” – Soundwave, Transformers, “City of Steel”