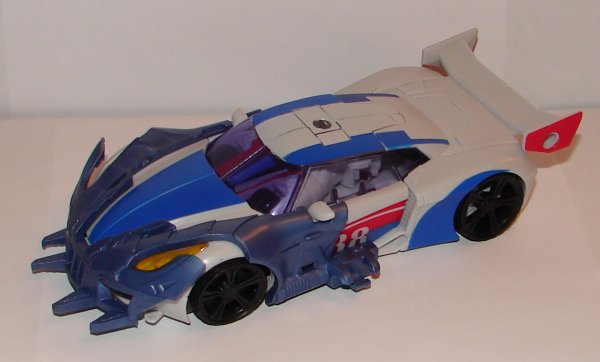 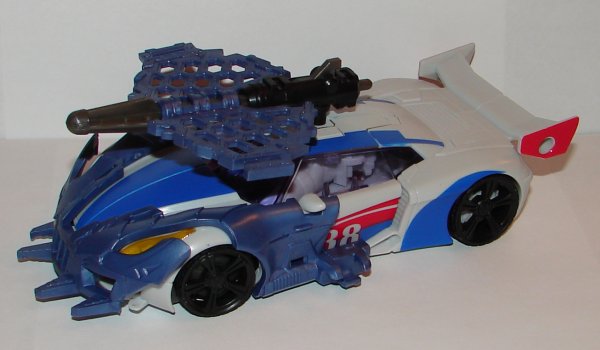 Vehicle Mode: This is the first deluxe non-remold Smokescreen.  As you may recall, he was previously released in Japan as a remold of Knockout.  I love Smokescreen’s race car mode, though his spoiler seems too big compared to the animation model.  He has quite a few pain apps making him look really sharp.  I wish they had painted his hub caps white.

Hasbro seems to done something really smart.  (I know, I’m shocked too.)  It seems that all deluxe and voyager toys for characters from the first two seasons who did not previously have toys released will have removable Beast Hunters armor.  This way they can still do the toy in the Beast Hunters series while still giving us a non Beast Hunters version.  Kudos to Hasbro, it would have really sucked for Smokescreen’s only USA release to be as a Beast Hunter.  The upcoming Voyager Shockwave also has removable armor.  I assume that if, and it’s a big if, we get Voyager Breakdown this year, he too would have removable armor.

Robot Mode: In robot mode he looks excellent.  I’m not a huge fan of all the parts hanging off his arms, but it’s not too bad.  I actually kind of like the armor on him.  All in all one of the best Prime toys of 2013 so far.