It’s been a really long time since I’ve done a Transformers Artifact of the Week, and the postman was very good to me, today.  He delivered this:

This is the mail order version of the Botcon Japan 1997 Exclusive Super Hybrid Model (or SHBM  or Super High-Bred Model) Galvatron.  I’ve been trying to track one of these mail order versions down for a while, ever since I discovered there were actually four versions of this toy and I only had three of them.  Here are all of them together:

SHBM Galvatron was originally designed in 1997 and was based on a modified Studio-OX animation model for Galvatron.  Arcee and Rodimus Prime were also planned.  At the time, none saw release, though I believe a few have shown up over the years.

Galvatron has very little articulation (shoulders, upper arms, neck, knees, and ankles, though the knees and ankles only rotate left to right) but is very nicely painted.  I think he is cast in gray and purple (or blue) plastic and then painted.  Not 100% sure on that, and I’m not willing to scratch it to confirm.  However, if you look closely the purple and blue versions appear to have two different shades of purple or blue, the paint not quite matching the plastic color.

I do not have access to the boxes that my original versions came in, but the one pictured above states on the back of the package “The BotCon Japan Executive Committee has reproduced this product from one that was planned for release in 1987 by Takara, Inc.”  This makes it unclear if they had access to the original mold or if a new one was made.  A new mold would seem unlikely, but this is just a PVC figure, not an actual Transformer, so a mold certainly could have been made.  I’m sure this info is out there on the web somewhere, but I couldn’t find it.

In two 1997 versions of SHBM Galvatron were released as Botcon Japan Exclusives, the standard version (left) and the orange “Lava” or “Lava Bath” version (right, obviously).  The Lava version is based on the original Generation One episode “Five Faces of Darkness” where Cyclonus, Scourge, and the Sweeps find Galvatron in a lava pit on the planet Thrull.

I’m not 100% sure how many of these were made.  I found a note online saying there were 100 of each, but I’ve seen the Lava one sell for a lot more, which suggests to me that it was produced in smaller quantities, but I’m honestly just guessing. 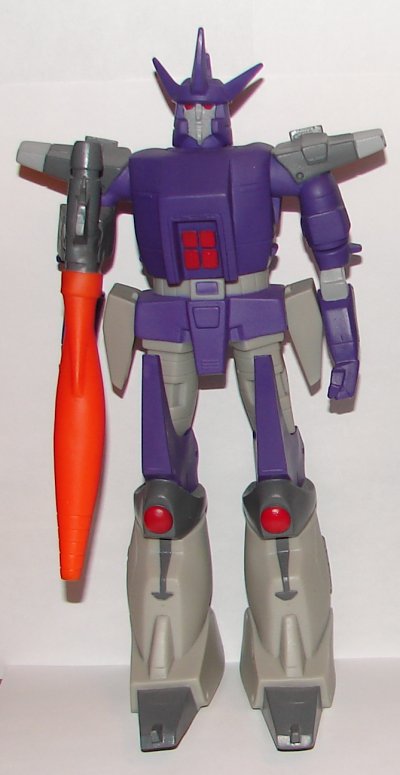 The third version above is the mail order version (second from right) that I received today.  I’m not sure exactly when this one was available.  He differs from the original release in a couple of ways.  Most obviously, he’s a darker purple.  Also, instead of painting his gun orange, the gun was cast in orange plastic.  I’m not sure of the reason for the change, though it means one less part that must be painted.  It might have just been a cost cutting measure.  Also of note, the Botcon 1997 purple Galvatron uses a metallic red paint for his knees, eyes, and chest.  This version uses a non-metallic red paint for those areas. 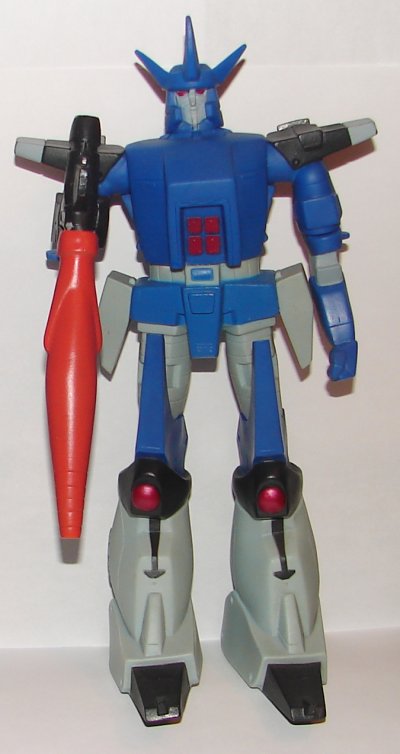 I don’t know much about the blue version (right).  I think it too may have been a mail order version, as there is one on ebay right now in the same packaging as my purple one came in.  I got mine loose, but I think that makes sense.  I’ve listed this as the fourth version, because that’s the order I put them in when taking the picture, but I’m not certain that’s accurate.  Unlike the mail order purple Galvatron this one has the same metallic red paint for the knees, eyes, and chest as the Botcon 1997 purple Galvatron.  The mail order purple one has the orange plastic barrel and this one has the painted barrel like the Botcon 1997 version, it seems reasonable that the blue one was the first mail order version and the purple mail order version came last.  At least that’s what I’m guessing.

I can’t really say Galvatron is worth the expense as a toy.  He has little articulation and does not transform.  He certainly looks cool though.

However, as a piece of Transformers history, I think it’s well worth it if you can get it at a reasonable price.  Botcon Japan was only held three times (1997, 1998, and 2000).  There were only a total of seven toys.  (In 1998 they had Beast Wars Mega Polar Claw and Scorponok repainted into their prototype colors as Barbearian and Double Punch.  In 2000 they had Optimus Prime, Megatron, and Mirage Choro-Q cars.)  So it is a fairly big deal from a historical standpoint.