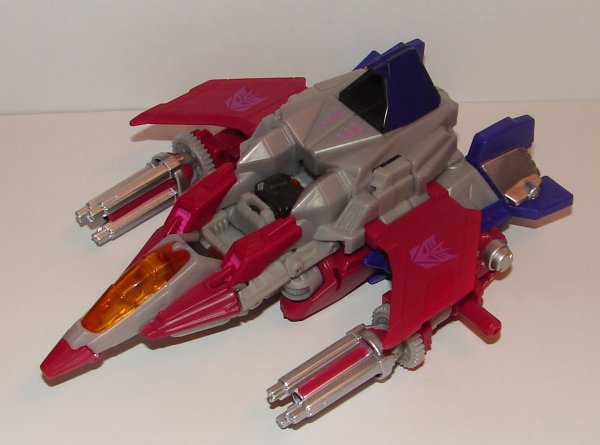 Vehicle Mode: Starscream looks amazing in jet mode.  He’s nicely painted and so far the best toy in the Generations Deluxe line (though at the time of writing this I don’t yet have a Kickback or Air Raid).  The only minor issue is the area right behind the cockpit.  It needed something there.  It looks like a piece is missing where you can see the back of his head.  It’s not, but there should have been a piece that folded into that open area.  It’s a minor thing though, especially with the toy being so awesome otherwise.

Robot Mode: He looks just as good in robot mode as in vehicle mode.  This is a great Starscream, and I really hope we’ll be getting Skywarp and Thundercracker to go with him.  I love the giant gun be comes with.  It splits in half to mount under each wing in vehicle mode.  Interestingly, all the toys I have in this wave so far seem to have been given bigger or more weapons than the first series of toys.  It almost feels like someone realized that with the toys being made smaller and the price being jacked up higher that some cool accessories would make them look like you’re getting your money’s worth (even though you really aren’t).

I’m 36 years old, and I work in network tech support for a public school system. I am a huge fan of Star Trek, Transformers, Harry Potter, and Marvel Comics as well as numerous other fandoms. I’m a big sports fan, especially the Boston Red Sox and the New England Patriots. I collect toys (mostly Transformers but other stuff too), comic books, and Red Sox baseball cards. I watch an obscene amount of television and love going to the movies. I am hopelessly addicted to Wizard Rock and I write Harry Potter Fanfiction, though these days I am working on a couple of different original YA novels.
View all posts by lmb3 →
This entry was posted in Toy Reviews, Toys, Transformers and tagged Fall of Cybertron, FOC, Generations, Starscream, Toys, Transformers. Bookmark the permalink.