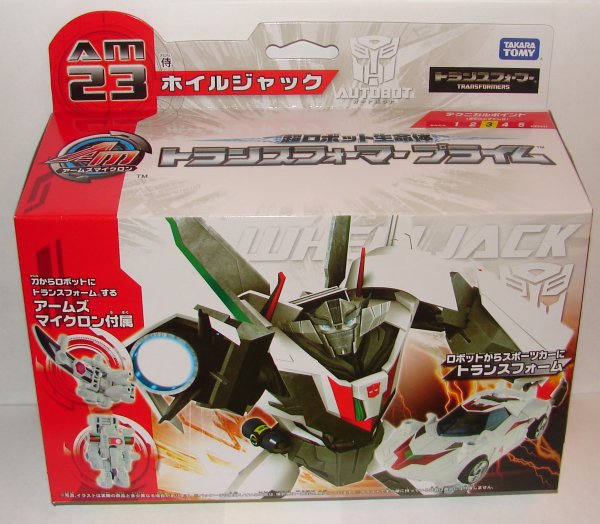 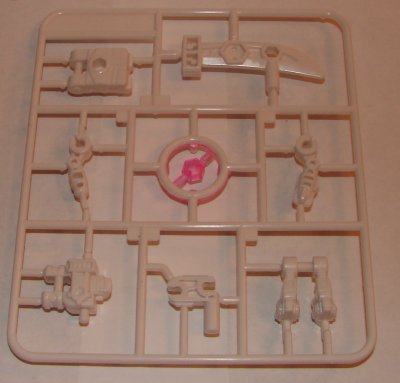 Weapon Mode:  They get an A for effort on this one, but a C for execution.  The blade isn’t long enough, and sticking out of the giant box at the hilt looks silly.  It was a nice try to make a curved blade sword like he comes with, but not good enough.  I don’t really like the white color either. 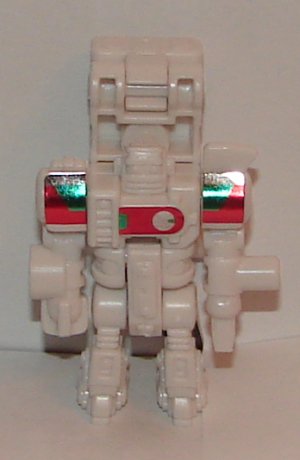 Robot Mode:  Robot mode is okay, but Ooje is definitely one of the weaker Arms Microns.  He looks like an astronaut with the big backpack.  Very sub par. 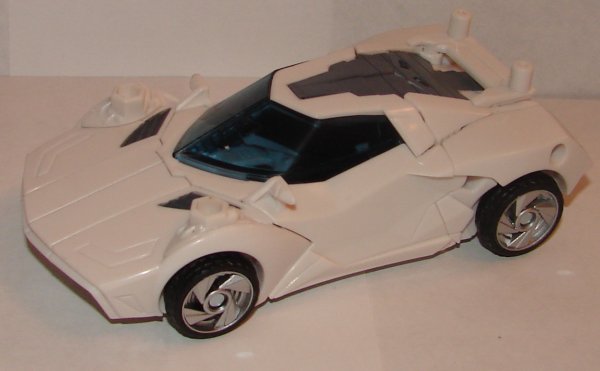 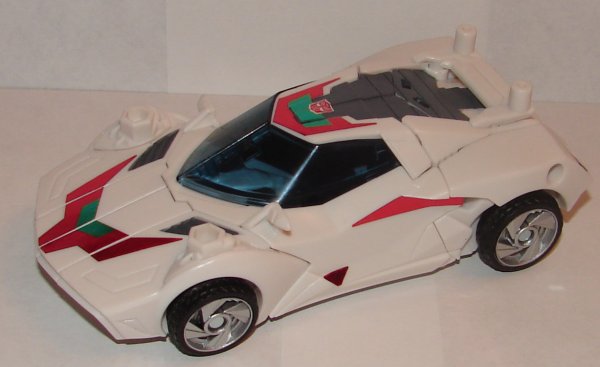 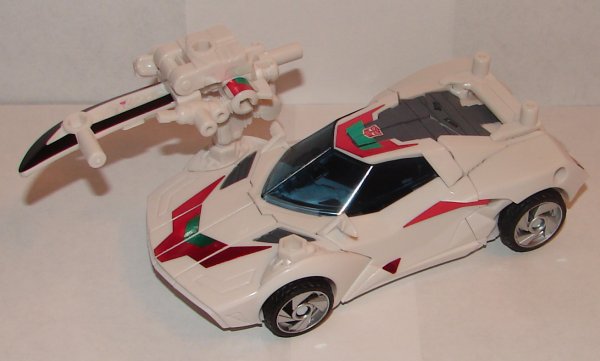 Vehicle Mode:  Wheeljack is one of my favorite Prime toys, awesome looking vehicle, great transformation, and nice looking robot.  Unfortunately, in remolding him for the Arms Micron line, the added ports on his front fenders, and pegs on his spoiler take away from the sleekness of his car mode.  While I prefer paint apps to stickers, the shiny metallic stickers look great on him. 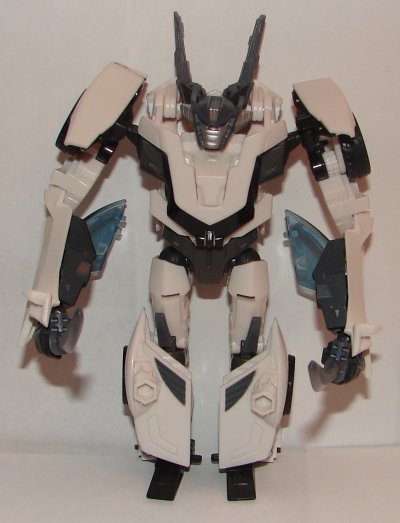 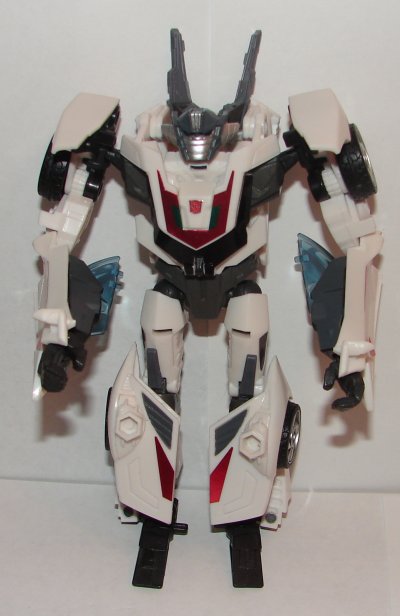 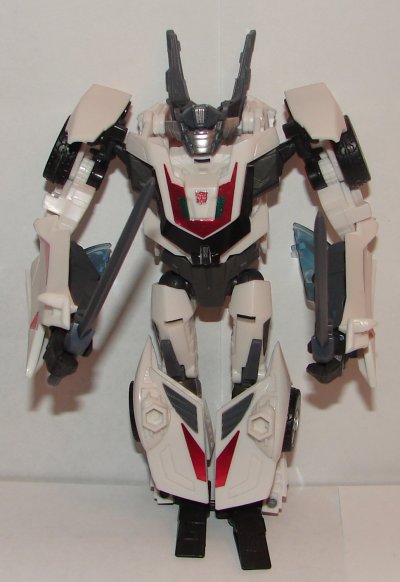 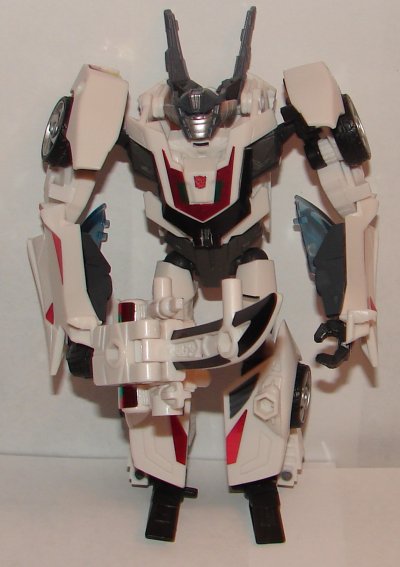 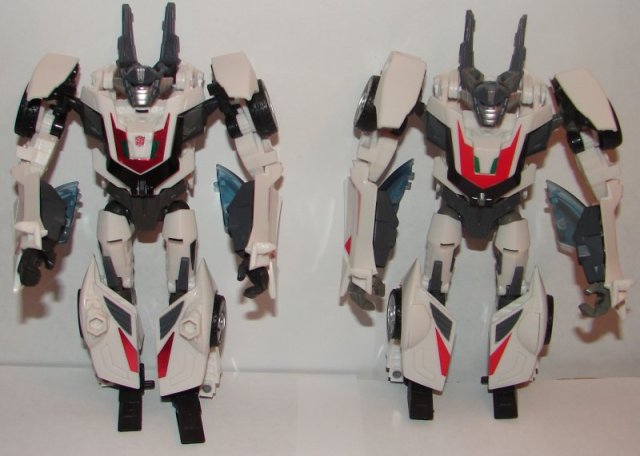 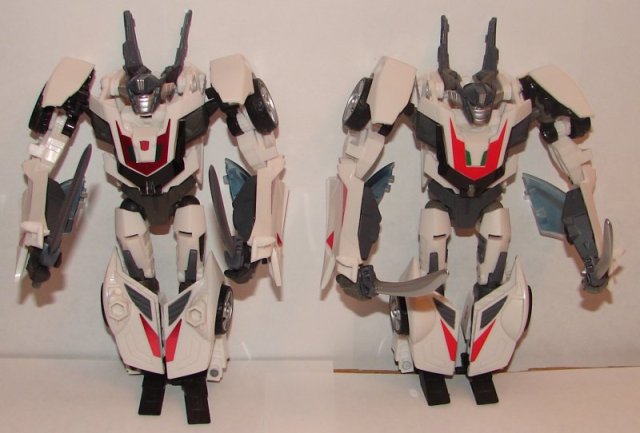 Robot Mode:  In robot mode, you can see the color differences to the USA version.  The gray plastic on the USA version is black on the Arms Micron version (with his forearms painted gray).  The swords from the USA version are included.  Off the top of my head, I believe that only Battle Shield Optimus Prime, who came with his sword, came with weapons from the USA toy.  I’m not really sure why they included the swords.  It might be because he has pegs on the bottom and under the front of the car just for mounting the weapons and they didn’t want to remove the pegs.  I don’t know.  Unfortunately, they didn’t paint the swords, so they look kind of like accessories from Star Trek The Next Generation Playmates figures.  Interestingly, the swords are made of softer plastic than the USA version.  The same softer plastic is used on his knees and the “wings” that stick up on his back.

I’m 36 years old, and I work in network tech support for a public school system. I am a huge fan of Star Trek, Transformers, Harry Potter, and Marvel Comics as well as numerous other fandoms. I’m a big sports fan, especially the Boston Red Sox and the New England Patriots. I collect toys (mostly Transformers but other stuff too), comic books, and Red Sox baseball cards. I watch an obscene amount of television and love going to the movies. I am hopelessly addicted to Wizard Rock and I write Harry Potter Fanfiction, though these days I am working on a couple of different original YA novels.
View all posts by lmb3 →
This entry was posted in Toy Reviews, Toys, Transformers and tagged Arms Micron, Ooje, Toys, Transformers, Transformers: Prime, Wheeljack. Bookmark the permalink.