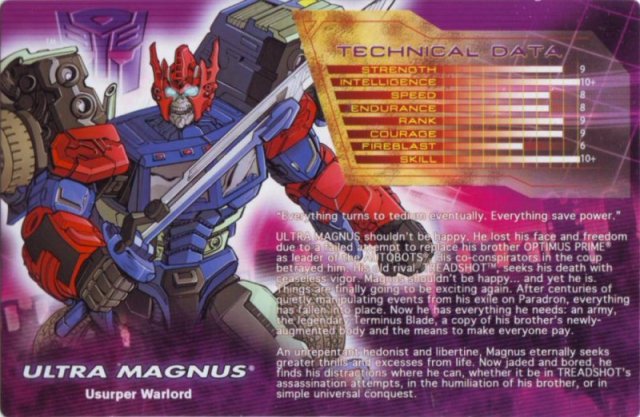 Botcon Universe: Shattered Glass  (Although, if you said Lord of the Rings, it would be an understandable mistake.)

I previously reviewed this toy based on the pictures released on the Botcon web site.  You can read that blog here.

I love the use of the Diaclone color scheme for Ultra Magnus.  From the pictures, I liked the new head, but now that I have it in hand, not so much.  It looks kind of stupid, actually.  It seriously looks like someone was watching the Lord of the Rings and made it look like the Witch-King of Angmar.  Apparently, the head was not a Fun Publications design, but the second head that Hasbro made as part of the original mold (more on that below).  Having said that, they still chose it.  I would have much preferred he have the Optimus Prime head.  The idea of a mirror world means the characters are essentially the same, but opposites.  It makes no sense for him to be almost unrecognizable as Optimus Prime.

It’s also important to note, that Fun Publications stating that this toy “has a new head” is at best disingenuous.  They charge more for toys with new heads, but this is not a new head they designed, this was already part of the mold and shouldn’t add any additional cost to the toy.  I think it’s an important distinction, since they make it sound like you are getting something new, and all you’re really getting is something Hasbro hasn’t used yet.  In fairness, they haven’t hidden this, the info is out there, but when they talk about toys having new heads, they should be more clear on the difference between a head they had made (Punch/Counterpunch, Kick-Over, Gigatron, G2 Breakdown, etc.) and one they had sculpted specifically for Botcon.

I’m 36 years old, and I work in network tech support for a public school system. I am a huge fan of Star Trek, Transformers, Harry Potter, and Marvel Comics as well as numerous other fandoms. I’m a big sports fan, especially the Boston Red Sox and the New England Patriots. I collect toys (mostly Transformers but other stuff too), comic books, and Red Sox baseball cards. I watch an obscene amount of television and love going to the movies. I am hopelessly addicted to Wizard Rock and I write Harry Potter Fanfiction, though these days I am working on a couple of different original YA novels.
View all posts by lmb3 →
This entry was posted in Toy Reviews, Toys, Transformers and tagged Botcon, Botcon 2012, Invasion, Shattered Glass, Toys, Transformers, Ultra Magnus. Bookmark the permalink.