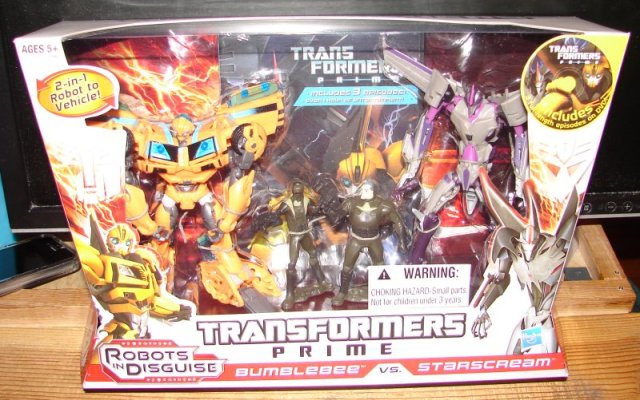 The second Transformers Prime Entertainment Pack is of course also not released in the USA.  This is an Asia exclusive.

I’ve included comparison pictures with the previous releases of the toys. 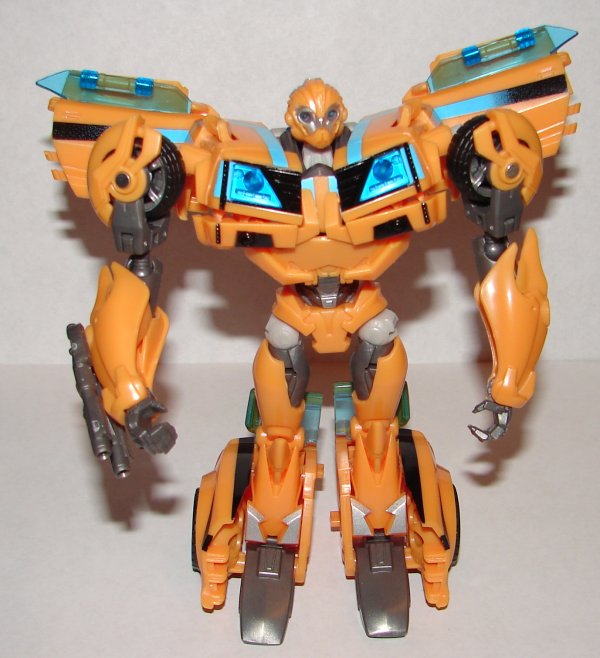 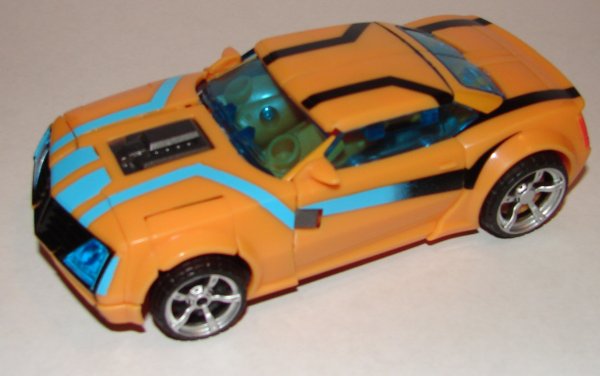 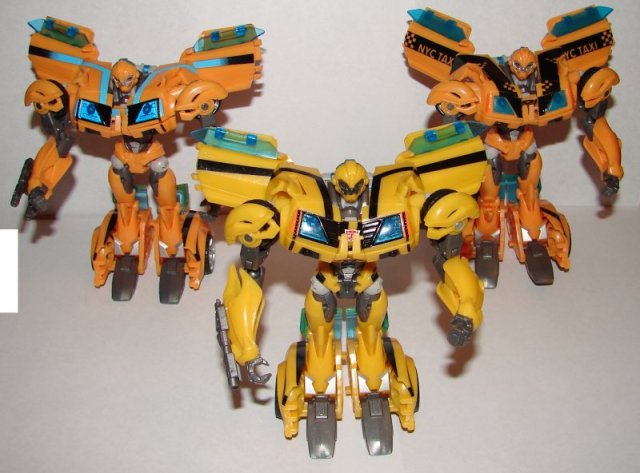 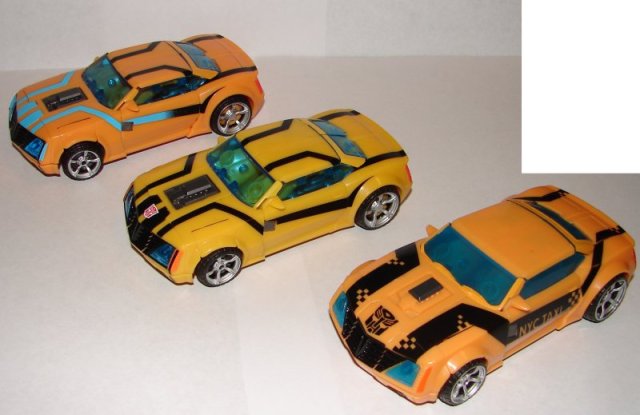 Bumblebee: This is the Transformers Prime First Edition Bumblebee repainted.  He’s more orange than the regular version of the toy.  I really like the blue highlights.  There may be a few less paint apps, but not really enough to notice.

While I was comparing the three toys for mold differences, I found something interesting that I haven’t noticed before about the NYCC exclusive Bumblebee and the Transformers Prime Bumblebee.  The mold for the gun was altered between the NYCC release and the single carded version.  That changed carried over into the Entertainment Pack version.

The gun on the left came from the later Transformers Prime version, while the one on the right is from the NCYY version.  As you can see the one on the left has thicker connectors to store him on the bottom of the vehicle.  If you have the NYCC version of this toy, you know the gun won’t stay on at all.  It’s a minor modification, but, if like me, you’re a variant collector, it’s an important thing to note. 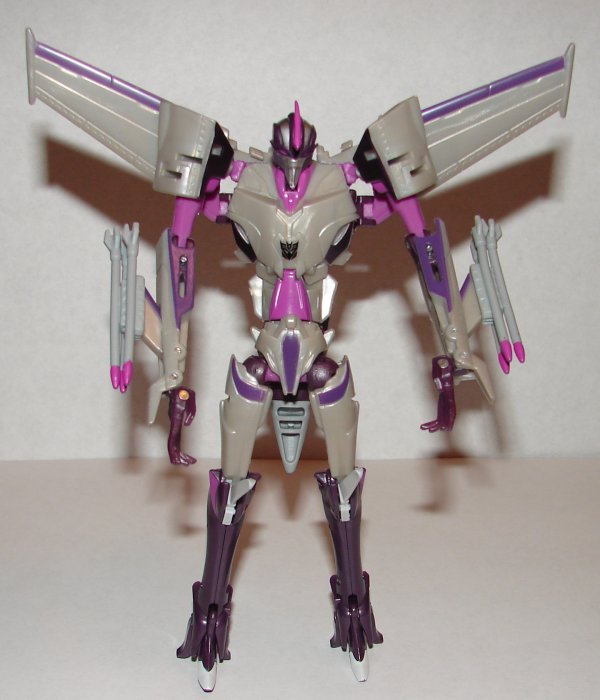 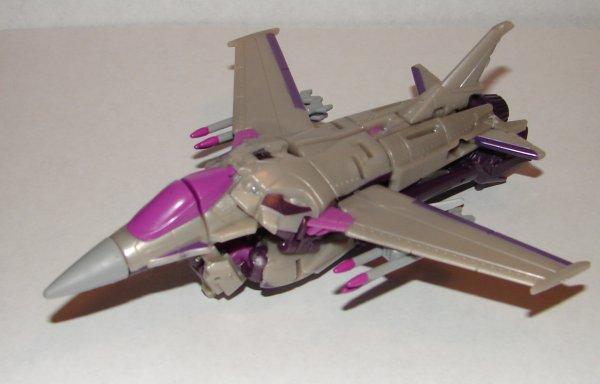 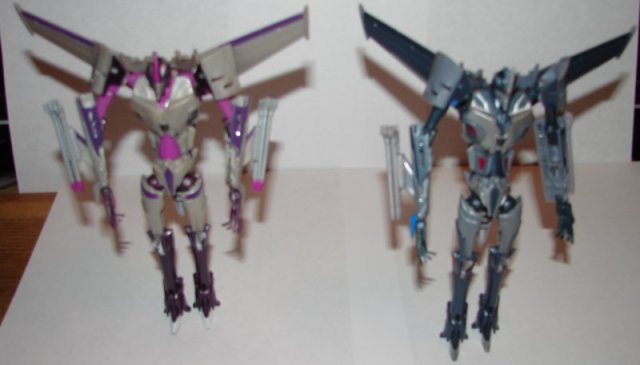 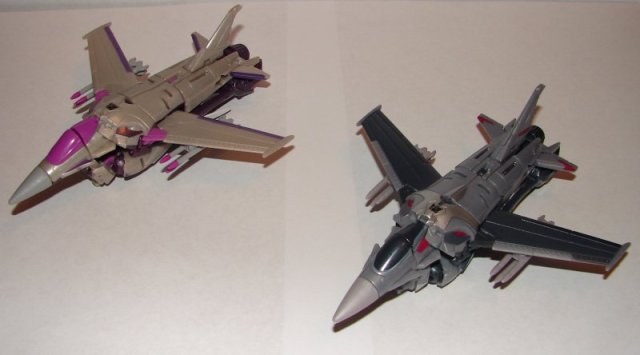 Starscream: This is the Transformers Prime First Edition Starscream repainted.  I really like the repaint colors, gray with light and dark purple, but with the exception of the tips of the missiles, which are now painted, this one is far less detailed than the original.  Nice overall though.  No mold changes here that I can detect. 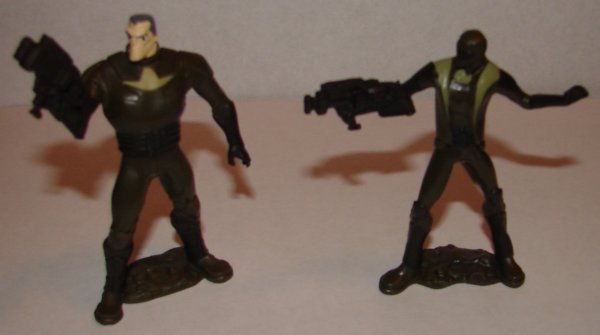 Leland “Silas” Bishop and Mech Soldier: These two figures have no joints, but they are fairly nice.  Not much to say about this.

I’m 36 years old, and I work in network tech support for a public school system. I am a huge fan of Star Trek, Transformers, Harry Potter, and Marvel Comics as well as numerous other fandoms. I’m a big sports fan, especially the Boston Red Sox and the New England Patriots. I collect toys (mostly Transformers but other stuff too), comic books, and Red Sox baseball cards. I watch an obscene amount of television and love going to the movies. I am hopelessly addicted to Wizard Rock and I write Harry Potter Fanfiction, though these days I am working on a couple of different original YA novels.
View all posts by lmb3 →
This entry was posted in Toy Reviews, Toys, Transformers and tagged Bumblebee, Entertainment Pack, Starscream, Toys, Transformers. Bookmark the permalink.