Hello!  I need to start out this blog with a couple of corrections from my last blog.  Zoe Saldana is not in Unstoppable, Rosario Dawson is.  I was sure I read she was in it, but apparently not.  Also, Fair Game actually premiered last weekend, not this weekend.  None of this is terribly important, but when I make a mistake, I own up to it.

“You’re going to risk everything for us with three weeks left?” – Galvin, Unstoppable

(Quotes may not be exact, I’m tying them from memory.)

Unstoppable was one of the most intense movies I’ve seen in a long time.  It was 98 minutes long, and I don’t think I took a breath for the last 68 of them.  Denzel Washington gave his usual fantastic performance, and Captain Kirk…err…Chris Pine was equally fantastic.  This is the only movie I’ve seen him in besides Star Trek, and he really holds his own in scenes with Washington.  I love trains, and I don’t think they make enough movies that take place on a train, but whether you like trains or not, see this movie.  It reminds me of Speed.  No one that that would be a hit, and I predict in the coming weeks, Unstoppable will make a far better than expected showing at the box office.  I wouldn’t expect a number one with Deathly Hallows with coming weekend, but I think it’s going to do pretty well.  Go see it.  You won’t regret it.

Speaking of Harry Potter, I’ll be seeing Deathly Hallow, Part I for the first time on Friday morning, 107 hours and 39 minutes from when I’m writing this…not that I’m counting or anything.  I’m going to see it either two or three times on Friday and then in IMax on Saturday morning.  I went to see a Wizard Rock show at The Space in Hamden Connecticut on Friday.  The Whomping Willows, Justin Finch-Fletchley and the Sugar Quill, Lauren Fairweather, and Draco and the Malfoys were all playing (Armoured Bearcub and Mike Lombardo as well, not Wrock, but still awesome) and for anyone who thinks that because the books are finished, the Harry Potter fandom is in decline, go see a Wrock show and you’ll know how wrong you are.  The show was awesome.  I think this was my 16th Wizard Rock show, and even though JFF and Whompy have played at 14 of them, I think, I never get tired of seeing them.

I picked up one of the coolest new Transformers in recent memory this week, Voyager Class Highbrow (Autobot).  His vehicle mode appears to be similar to the World War 2 era Lockheed P-38 Lightning fighter.  It may not be meant to represent any actual aircraft, but the P-38 is the closet thing I can find.  (If anyone knows the actual model, let me know, I’m curious.)  It’s a very cool toy.  I have yet to see it in stores, I picked mine up on HasbroToyShop.com.  Here’s a link, take a look, very cool.

Speaking of toys not on the shelves, new Transformers reaching stores have been sporadic at best lately, especially with Generations deluxe and mainline Voyagers, but across the board things are just trickling out.  A lot of this is probably stores stocking up the warehouses for the holiday shopping season, but ever since the last few waves of the Revenge of the Fallen line, things have been weird.  The last wave of RotF deluxes were virtually nonexistent in stores.  Red Rampage and Evac are still impossible to find.  Don’t even get me started on RPM’s.  Then we had almost nothing for three months, then Hasbro shipped TONS of the first waves of gold card/box, Generations, and Power Core Combiners, and all waves since have trickled out.  It’s getting really annoying, but hopefully after Black Friday, there will be plenty of new stuff hitting the shelves.

Picked up another awesome Transformers item this week. 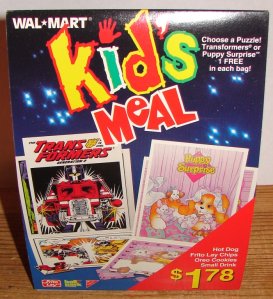 This is a Generation 2 Wal-Mart Kids Meal table advertisement.  I wonder how many of these still exist.  Collecting was big by the 1990’s, so I’m sure a pretty good number of them have survived.  Older stuff isn’t so lucky.  I hate to think about how many things people threw out back in the day that I would so love to have now.  In 1986, Ziploc did a Transformers promotion.  There were five different iron-ons available.  I have them all, but what I don’t have is any Ziploc boxes with the Transformers offer on it.  Millions of them must have ended up in landfills and have long since disintegrated.  That’s the way it goes, I guess.  Here are the Ziploc iron-ons, if you’re curious.

Next week, I’ll be blogging about Deathly Hallows, of course.  I’ll do it in two parts, spoiler free and then spoilers, so no need to worry about being spoiled, I’ll be careful.

The Patriots just finished off the Steelers.  Colts next.  I predict a 41-17 win for the Pats.

I’m 36 years old, and I work in network tech support for a public school system. I am a huge fan of Star Trek, Transformers, Harry Potter, and Marvel Comics as well as numerous other fandoms. I’m a big sports fan, especially the Boston Red Sox and the New England Patriots. I collect toys (mostly Transformers but other stuff too), comic books, and Red Sox baseball cards. I watch an obscene amount of television and love going to the movies. I am hopelessly addicted to Wizard Rock and I write Harry Potter Fanfiction, though these days I am working on a couple of different original YA novels.
View all posts by lmb3 →
This entry was posted in Harry Potter/Wizard Rock, Movie Reviews, Movies, New England Patriots, Sports, Toy Reviews, Toys, Transformers and tagged Harry Potter, Movies, New England Patriots, Star Trek, Toys, Transformers, Unstoppable. Bookmark the permalink.