God, I love that movie.  That seemed like an appropriate way to start, considering the date.

Anyway, welcome to my first ever blog post!  Funny thing is, I’ve spent most of the week getting the site ready, and now realize…I don’t have any idea what to write about.  I guess I’ll think of something.

I’m not setting a schedule fro this blog.  As it is, I don’t have anyone subscribed to it, so it’s not like anyone will be waiting for my posts.  It will probably be once a week, either Friday, Saturday, or Sunday, unless I have something interesting…at least interesting to me…to say. 🙂

I saw Megamind this evening.  Very funny movie, I highly recommend it.  Not your typical super hero story to say the least, but very good.

I made an interesting toy find last Friday.  I went into a Toys R Us and found these: 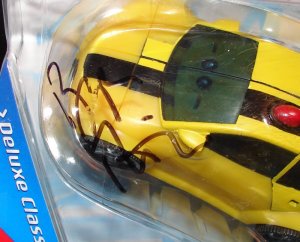 I saw the Optimus Prime with what appeared to be an autograph on it and my first thought was that some bozo with a sharpie was having some fun.  By fun, of course, I am being sarcastic.  Then I saw the Bumblebee behind it, and it was in a different color.  Now, I didn’t have Bumper Robinson’s (Bumblebee) autograph, but I had David Kaye’s (Optimus Prime) autograph from Botcon 1997, and there was something familiar about the autograph on the Prime.  I bought them, and when I compared the David Kaye auto to the one I had, they weren’t exactly the same, but they had clear similarities, and the new one looked abbreviated, like it was signed by someone who had signed thousands of autographs in the last thirteen years.

I e-mail Autocon (Yahoo Groups) and someone who was at Botcon confirmed they were authentic.  Best guess is someone got them signed, couldn’t flip them for a profit on ebay and just returned them.  Guess it was my lucky day.

I picked up an interesting Transformers Animated item on ebay this week.  It’s a pillow that unfolds to reveal a cloth storybook inside.  I’ve never seen anything quite like it.

I’m getting psyched for HP.  This Friday, November 12th, I’m driving 2.5 hours to Hamden, CT for a Wizard Rock show!  The Whomping Willows, Armoured Bearcub, Lauren Fairweather, Justin Finch-Fletchley and the Sugar Quills, Mike Lombardo, and Draco and the Malfoys will all be playing.

Two weeks from today Harry Potter and the Deathly Hallows, Part I comes out.  Needless to say I can’t wait!  Expect a review on the 21st.

Before HP though, I’m really looking forward to two movies next weekend.  Fair Game looks amazing.  If you haven’t seen the previews it’s based on a true story of a CIA (I think) agent who’s identity is revealed to the public to punish her husband for his political views (or something like that, I’m too tired to look it up, sorry).  The other one is Unstoppable.  I have been a train buff since I was a kid, and Denzel Washington along with Chris Pine and Zoe Saldana from Star Trek, is a great cast.  I know it’s probably not exactly going to be an Academy Award contender, but I love a good action movie.

I am very happy that the Red Sox exercised their club option on David Ortiz for next season.  I know he’s getting older, but he proved this year, he can still get it done with the bat.  I kind of wished they’d given him a multi year deal, but I can see why they didn’t.  He needs to retire a Red Sox.  In case anyone is curious, my Red Sox wish list for this off-season is Carl Crawford, Jason Varitek, Victor Martinez, and Adrian Gonzalez (or Adrian Beltre), and some bullpen help, though with Jonathan Papelbon, Daniel Bard, Hideki Okajimi, Tim Wakefiled, and newly resigned Scott Atchison, the bullpen is in decent shape.  I wish they could unload J.D. Drew.  He’s been good for them, but he’s never come close to being worth that 75 million dollar contract.  I would love to see a starting outfield of Crawford, Jacoby Ellsbury, and Ryan Kalish next year, but I have a feeling if they can get Crawford, Ellsbury will be traded.  He could be traded anyway, as we have Mike Cameron for another year.  I wouldn’t mind seeing them trade Cameron, but, I think he’s due 7.5 million next year coming off abdominal surgery, so that might be impossible.

One last subject.  I’ve written about 9,000 words, but I think I’m going to go back to the start and write in the first person.  I prefer writing in the third person, but I’m having trouble with this one.  The first few chapters were fine, but now I can’t seem to write anything that doesn’t sound like complete crap.  (The earlier chapters were only mostly crap.)  Maybe it will work better in first person.  I did NaNoWriMo last year and wrote in the first person, so stuff is easier that way, I think.  I’ll try not to whine too much about my writing frustration on here.

Anyway, I think that’s more than enough for my first blog that I had no idea what I was going write about.  I hope you’ve found something interesting.  I wouldn’t expect them all to be this long, and maybe I’ll do more frequent posts that are shorter and have fewer topics.  We’ll see what happens.

I’m 36 years old, and I work in network tech support for a public school system. I am a huge fan of Star Trek, Transformers, Harry Potter, and Marvel Comics as well as numerous other fandoms. I’m a big sports fan, especially the Boston Red Sox and the New England Patriots. I collect toys (mostly Transformers but other stuff too), comic books, and Red Sox baseball cards. I watch an obscene amount of television and love going to the movies. I am hopelessly addicted to Wizard Rock and I write Harry Potter Fanfiction, though these days I am working on a couple of different original YA novels.
View all posts by lmb3 →
This entry was posted in Boston Red Sox, Miscellaneous, Movie Previews, Movies, Sports, Toys, Transformers and tagged Boston Red Sox, Harry Potter, Movies, Star Trek, Toys, Transformers, Writing. Bookmark the permalink.

1 Response to Blog #1: Remember, Remember the Fifth of November…