Fourteen months after ordering him, I finally received my Botcon Exclusive Wasp Raider. This is the first exclusive toy from the now Fun-Publess Botcon (Perhaps Fun-Pub-Light Botcon would be more accurate). Let’s start with the box. 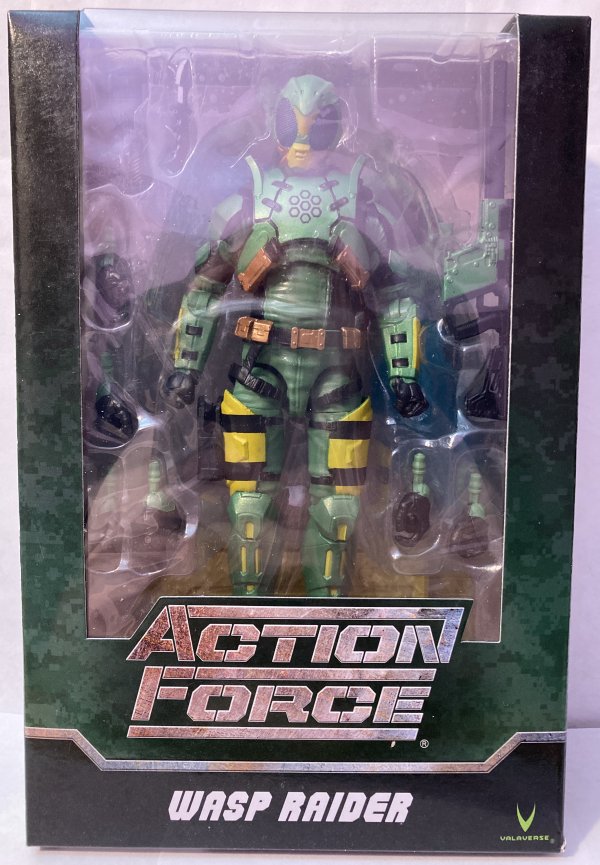 “Ant-Bot not find own thorax with both hands and a road map.” – Waspinator, Transformers: Beast Wars, “Nemesis Part 1”

We’ll talk about the back of the box later. At the risk of stating the obvious, Wasp Raider is only tangentially a Botcon Exclusive. The toy is from this other line called Action Force that has nothing to do with Transformers. It’s part of the Valaverse, whatever the hell that is. Took me a moment to realize they did actually put the Botcon logo on the side and top of the box, much smaller than the Action Force logo. I was not expecting to get a toy from another line with the Botcon logo added secondarily to the box, but it is what it is. 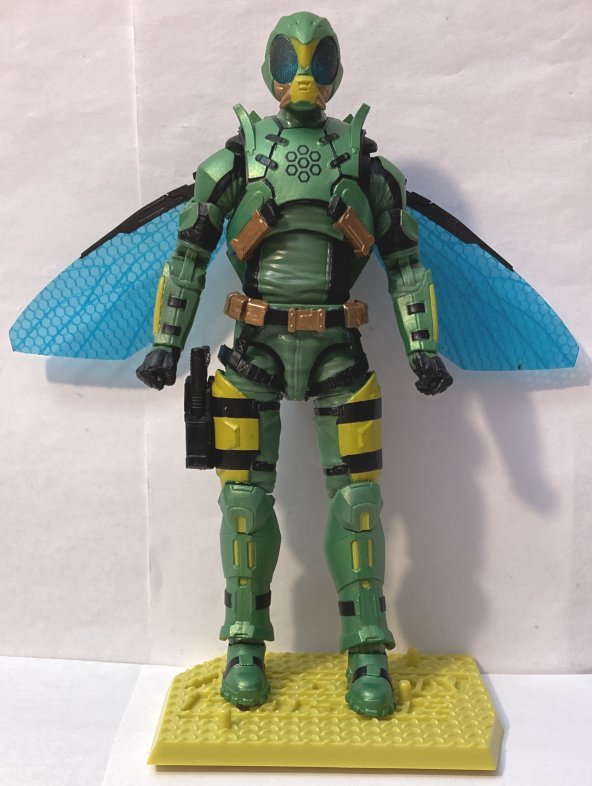 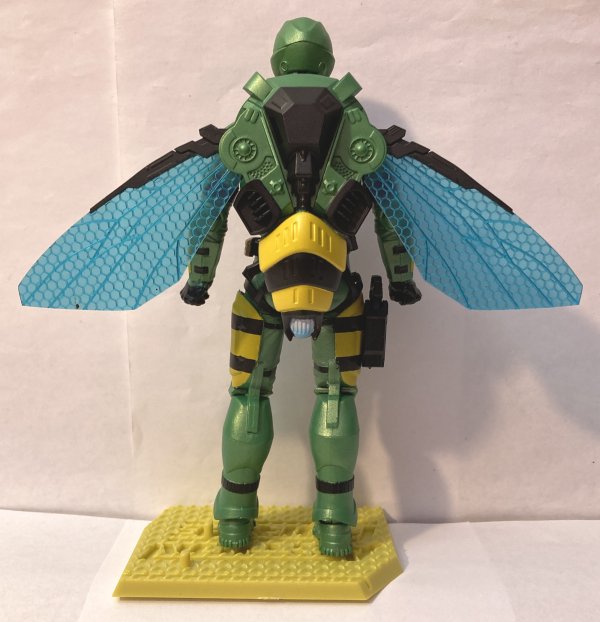 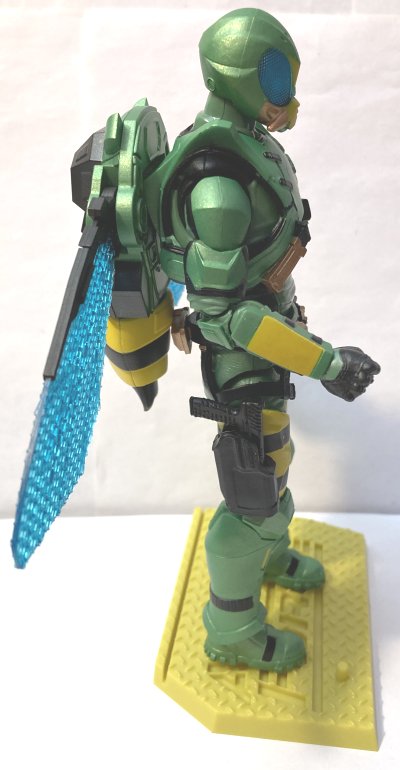 And here we have Wasp Raider. If we ignore that he should have something to do with Transformers for a moment, it’s a really cool looking figure. It’s got a lot of detail and a great paint job. He has wasp wings for some reason, which I don’t really get in a military figure, but whatever. He has two guns and a knife. I love the sheathe on the back of his belt for the knife, and the holster for his smaller gun. It’s a really detailed figure. (You’re probably sensing a “but” coming.) 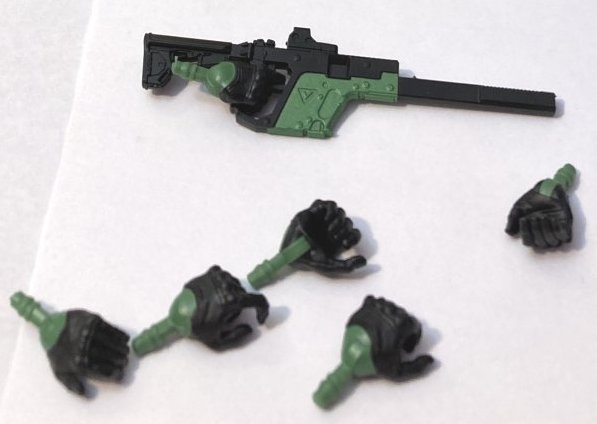 Unfortunately, I was unable to get his freaking hands out to put in the hands he can hold his guns and knife with. Admittedly, I’m not possessed of a great deal of upper body strength. Kermit the Frog has bigger arms than I do. But I’ve never been unable to pull a fist out of an action figure. I hurt my finger I was gripping it so tight. I could grab it with pliers, but I don’t really want to destroy the fist to get it out. That’s petty crappy design. 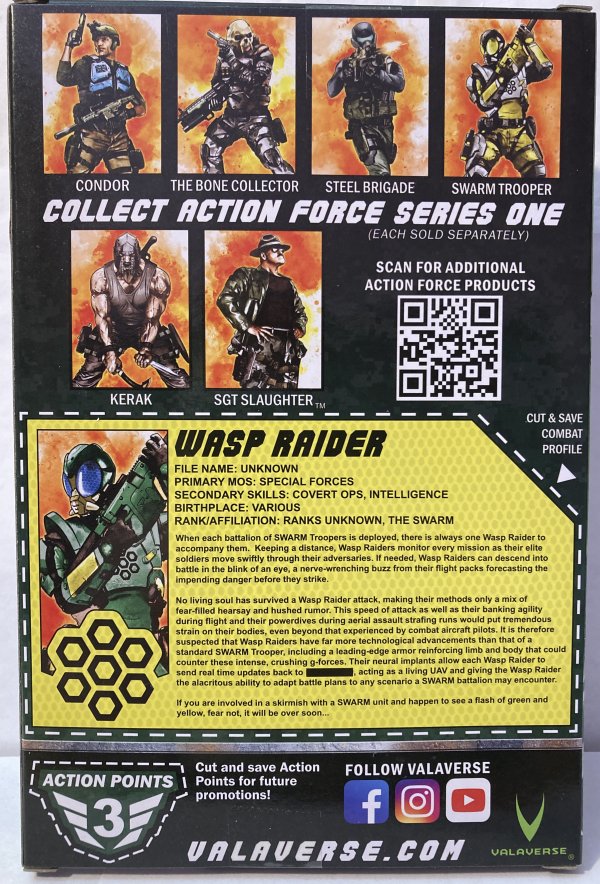 “Waspinator has a headache in his whole body.” – Waspinator, Transformers: Beast Wars, “Possession”

And now we have the back of the box. This I was not expecting. We knew we were getting a non-transforming action figure, but I assumed he would at least get a bio on the box that would in some way make him relevant to being a Botcon Transformers exclusive. Not a single word. Nothing that even hints at Waspinator. Hell, I would have even chuckled and been fine if they had just said that he based his armor on a 1990’s CGI character. If they had produced a comic book that had Waspinator wall through a whole in time and come out the other side as a soldier in this form that would have worked. I thought we had reached the lowest point for Transformers exclusives when we got a bunch of Diaclone toys as Transformers exclusives in 2015. I was unfortunately wrong. Having said that, it’s nowhere near as painful as 2015. One $50 action figure is palatable if about $20 overpriced. If they start doing more than 1 per year, I may start to feel differently.

I’m glad someone is happy. What I don’t understand is why this was what we got as an exclusive. Your guess is as good as mine, but I have some theories. It is not crazy to think the new incarnation of Botcon wants to get back in bed with Hasbro and become their official convention and get exclusives. There is a lot of logic in that. If that were true, and again, this is just speculation, they would probably want to stay away from third party exclusives, which would have been the logical way to go. It would certainly be a better idea than Wasp Raider. While I can see why they would want to get back with Hasbro, I can’t imaging that happening. Hasbro’s Selects line is giving us great toys and at a reasonable price, something No-Fun Pub never did while they were raping our wallets. It remains to be seen if ,post Covid, Hascon comes back or Pulse Con becomes an in person event, but Hasbro doesn’t seem to care about an official fan convention. I suppose staying away from third party toys could also be connected with how they got the name, that they contractually can’t do a third party exclusive, so this is the best they can do. Not sure why that would be, but I suppose it is possible. Brian Savage had his head so far up his ass about third party toys I can imaging him making it a condition of selling the name that they not produce third party toys. In any case, I’m going to choose to believe this was the best they could do, and no one really thought this was a good idea, it’s just all they had. Yeah, I’m probably being naïve.

“Don’t blame people for disappointing you. Blame yourself for expecting too much from them.” – Anonymous

I’m 36 years old, and I work in network tech support for a public school system. I am a huge fan of Star Trek, Transformers, Harry Potter, and Marvel Comics as well as numerous other fandoms. I’m a big sports fan, especially the Boston Red Sox and the New England Patriots. I collect toys (mostly Transformers but other stuff too), comic books, and Red Sox baseball cards. I watch an obscene amount of television and love going to the movies. I am hopelessly addicted to Wizard Rock and I write Harry Potter Fanfiction, though these days I am working on a couple of different original YA novels.
View all posts by lmb3 →
This entry was posted in Toy Reviews, Toys, Transformers and tagged Botcon, Toys, Transformers, Wasp Raider, Waspinator. Bookmark the permalink.