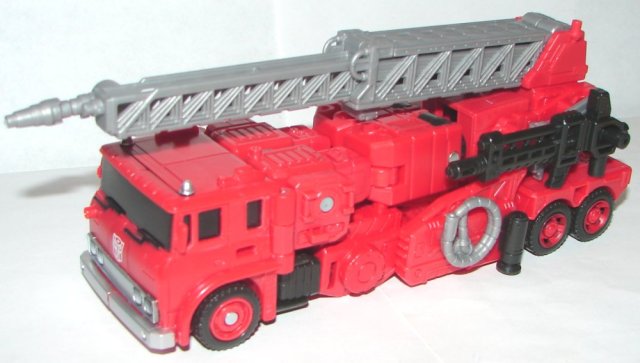 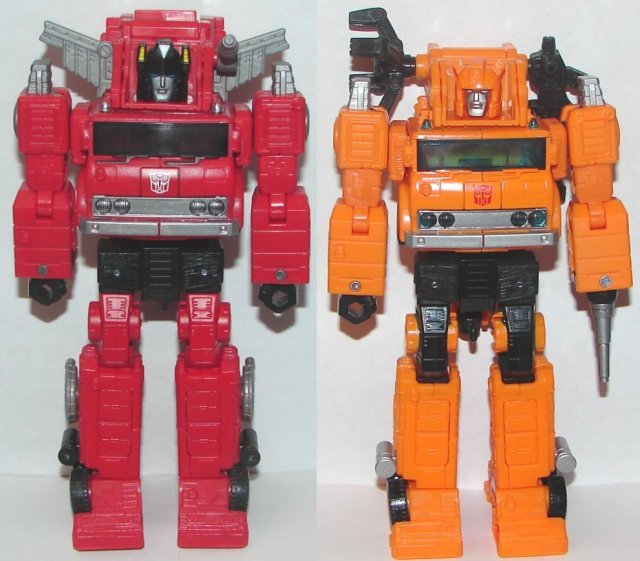 Inferno is awesome. From the neck down he is a repaint of Grapple, but he has been remolded from the neck up (including the ladder hanging off the back of his head). Obviously his head sculpt is new, and the sides of that brick that sits on his shoulders behind his head have been remolded to give Inferno the flip out wings and peg for his nozzle. While he could use a few more paint apps in vehicle mode, he’s not as plain looking as Grapple since his ladder is silver rather than the same color as the rest of him. Inferno has two coiled hose accessories that plug into ports on the sides of his legs. Those are new accessories, but no change was made to the mold.

Overall: Inferno is pretty awesome, and certainly better than any previous non Masterpiece Infernos I can think of. He’s a must have.

I’m 36 years old, and I work in network tech support for a public school system. I am a huge fan of Star Trek, Transformers, Harry Potter, and Marvel Comics as well as numerous other fandoms. I’m a big sports fan, especially the Boston Red Sox and the New England Patriots. I collect toys (mostly Transformers but other stuff too), comic books, and Red Sox baseball cards. I watch an obscene amount of television and love going to the movies. I am hopelessly addicted to Wizard Rock and I write Harry Potter Fanfiction, though these days I am working on a couple of different original YA novels.
View all posts by lmb3 →
This entry was posted in Toy Reviews, Toys, Transformers and tagged Deluxe Class, Inferno, Kingdom, Toys, Transformers, Transformers Kingdom. Bookmark the permalink.