Vehicle Mode: In vehicle mode Bumblebee looks pretty decent. His headlights and front and side windows are painted, but of course, not his taillights or rear window. I forgot to take a picture of him with his armor on in this mode. Basically, you plug his sword in on his roof, and plug the armor on top of that. Looks too stupid to bother digging him out of the box for another picture. 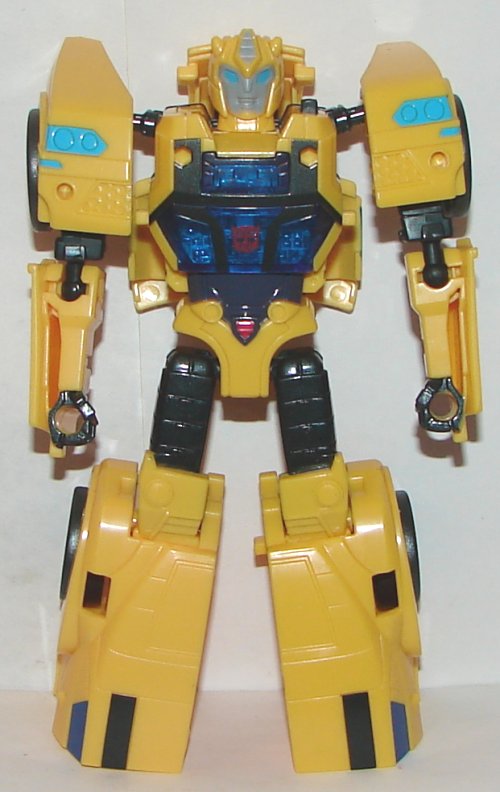 Robot Mode: In robot mode Bumblebee looks pretty good. Fairly decent for a Cyberverse toy. There is a switch on his shoulder that activates his battle call feature, which lights up his chest. As you speak, the light pulses brighter. I turned on mine and it was pulsing with the sound of the TV. I don’t really get the point. His armor that is a little too dark. I think a few shades lighter blue would have looked better.

Overall: While the gimmick is stupid, it’s not a bad Bumblebee toy, but probably only a must for completists.

I’m 36 years old, and I work in network tech support for a public school system. I am a huge fan of Star Trek, Transformers, Harry Potter, and Marvel Comics as well as numerous other fandoms. I’m a big sports fan, especially the Boston Red Sox and the New England Patriots. I collect toys (mostly Transformers but other stuff too), comic books, and Red Sox baseball cards. I watch an obscene amount of television and love going to the movies. I am hopelessly addicted to Wizard Rock and I write Harry Potter Fanfiction, though these days I am working on a couple of different original YA novels.
View all posts by lmb3 →
This entry was posted in Toy Reviews, Toys, Transformers and tagged Battle Call, Battle Call Trooper Class, Battle Call Trooper Class Bumblebee, Bumblebee, Cyberverse, Toys, Transformers, Transformers Cyberverse, Trooper Class. Bookmark the permalink.