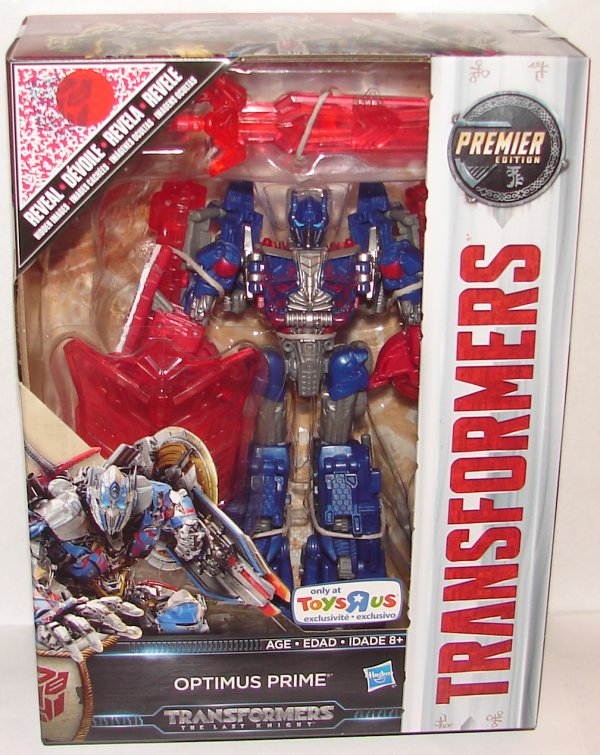 Vehicle Mode: Optimus Prime is a repaint of the Dark of the Moon Voyager Optimus Prime with a new set of weapons. I’ve never done a full review of this mold. I love his vehicle mode. Unfortunately the paint job on this version has a lot to be desired. He has paint apps that are meant to be revealed when you look through his sword and shield. It’s not very well executed. First of all, it looks like crap. They didn’t have to do it on his whole roof and hood. They could have just done a logo shaped area with the logo revealed in it. Second of all, his sword and shield do not have enough flat untextured area to really look through without distortion. Lastly, the translucent red wheels just don’t work. I don’t mind it so much on his fuel tanks. If they wanted to do him all in translucent plastic, I would be all for it, but just the wheels and fuel tanks doesn’t really work.

Robot Mode: In robot mode, this is not the best Optimus Prime mold. He’s not very well proportioned. He has very long legs and a very short torso. Not terrible though. We’ve had worse. I do love the new weapons, and in robot mode the color scheme works much better.

Overall: This toy was announced as a Target exclusive like the other Reveal the Shield set, the One Step Changer six-Pack, but has shown up at Toys R Us with a TRU exclusive sticker. There are also repainted Bumblebee and Optimus Prime masks that have shown up overseas as part of the Reveal the Shield series. It remains to be seen where they end up. If you missed out on this mold, go ahead and grab it, but otherwise I’d say it’s for completists only, though it does have new weapons.

I’m 36 years old, and I work in network tech support for a public school system. I am a huge fan of Star Trek, Transformers, Harry Potter, and Marvel Comics as well as numerous other fandoms. I’m a big sports fan, especially the Boston Red Sox and the New England Patriots. I collect toys (mostly Transformers but other stuff too), comic books, and Red Sox baseball cards. I watch an obscene amount of television and love going to the movies. I am hopelessly addicted to Wizard Rock and I write Harry Potter Fanfiction, though these days I am working on a couple of different original YA novels.
View all posts by lmb3 →
This entry was posted in Toy Reviews, Toys, Transformers and tagged Optimus Prime, Reveal the Shield, The Last Knight, TLK, Toys, Transformers, Transformers The Last Knight, Voyager. Bookmark the permalink.