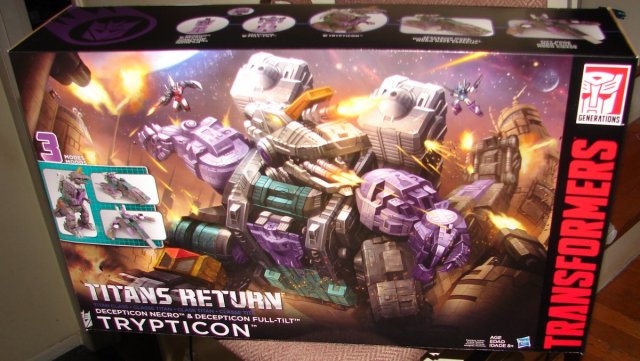 Titan Master: I really like Full-Tilt’s head sculpt. It is unfortunate that even on a $150 toy, Hasbro couldn’t be bothered to paint Necro’s face. 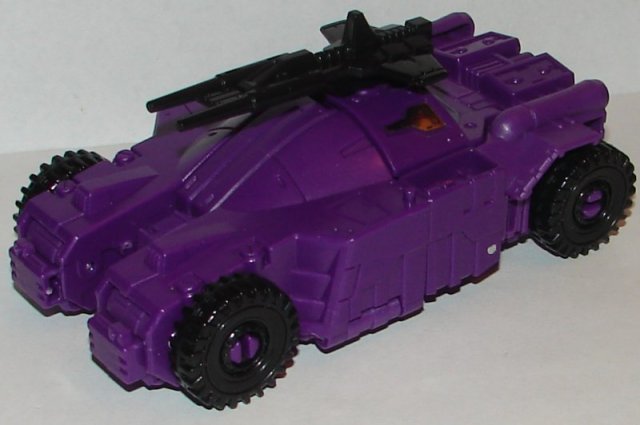 Full-Tilt is very cool. In fact, he’s my favorite part of this set. He looks great in both modes. A couple more paint apps or stickers would have been nice. 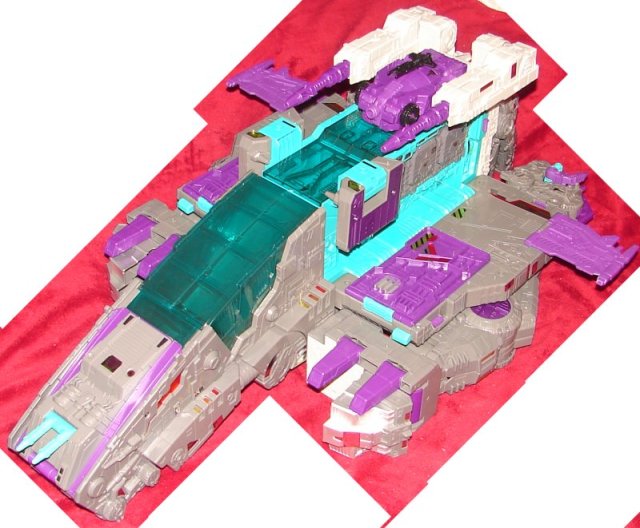 Space Ship Mode: Trypticon’s spaceship mode is pretty good. You’ll note in the photo on his right side (your left) the deck isn’t down flat. For some reason I couldn’t get his right hip joint into the correct position. Not sure if this is related to the spring problem or not. It didn’t seem to be. I had the same problem in City mode until it popped fully into place. More on his hip joints later.

City Mode: Trypticon’s city mode is pretty faithful to the G1. I’ve never loved the Transformers cities (except their robot modes). Transformers have never been in scale with them, so the cities always seemed pretty pointless. He’s kind of enormous. Frankly, if he’d been 25% smaller and $30 cheaper, I think I’d like him a lot more.

Robot Mode: Trypticon looks awesome in robot mode. Mine did have the loose chest door issue, but two turns of a screwdriver fixed that. He does have a couple of design flaws. His tail is designed to bend/lengthen. I assume this is meant to make him able to stand up straight like in the cartoon, but while trying to get him to stand up like the G1 toy, his tail kept extending on me. Just very annoying. His hip joints are more of an issue. I’m not talking about the well known spring issue. His hip joints give him completely unnecessary lateral movement of his legs. This is the movement that gave me so much trouble in his other modes. His legs do not need to move farther apart. It serves no purpose.

Overall: Trypticon is not a bad toy, though his stickers are a complete nightmare to apply. He looks great, but he is over-engineered and oversized. He really didn’t need to be this big. He also lacks the one feature that really made G1 Trypticon special, the ability to walk on his own. He’s certainly a better Titan Class toy than Metroplex or Fortress Maximus, but not as good as Devastator. (Plus he could have been Omega Supreme, and that still kills me.)