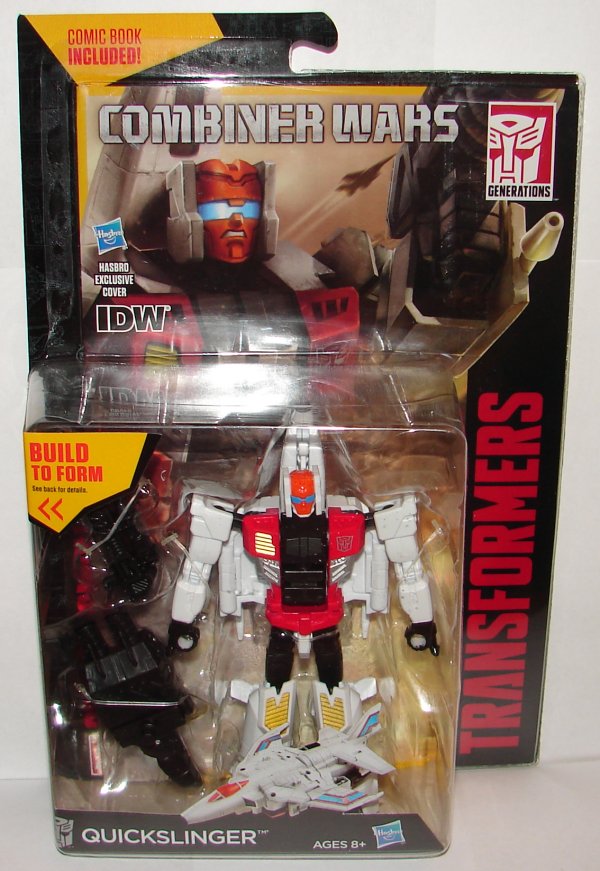 Finally, we have all the Aerialbots as they were meant to be! 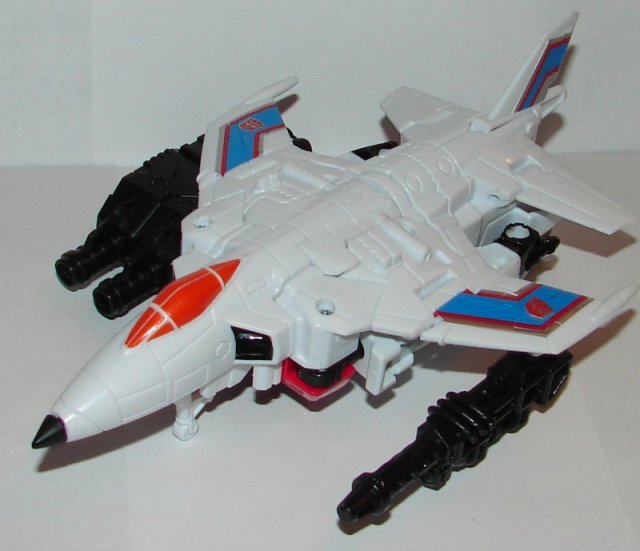 Vehicle Mode: If you look at the original G1 Slingshot’s wing configuration this mold looks more like Slingshot that it does Fireflight.  Painted up as Slingshot, the only minor issue is that Slingshot has a shorter jet nose, giving his nose a stubbier look.  Had they taken the one additional step to remold his nose, he would be perfect.  As is, he’s pretty close.  If you really want to nitpick, his rear horizontal stabilizers should be straight and not sweeping down.  Those stabilizers sweeping down comes directly from G1 Fireflight’s design.  The overall design of this jet really is a cross between Slingshot and Fireflight.  Almost feels like this was planned right from the beginning, which seems unlikely.  That’s a lot more forethought than I’ve come to expect from Hasbro, though they do sometimes surprise me.

Robot Mode: In robot mode with the new head he is perfect as G1 Slingshot.  I give Hasbro credit for recognizing their mistake and correcting it.  Now let’s hope they stop making mistakes.  (HA!)

Overall: A definite must for anyone who cares about respecting the source material.

I’m 36 years old, and I work in network tech support for a public school system. I am a huge fan of Star Trek, Transformers, Harry Potter, and Marvel Comics as well as numerous other fandoms. I’m a big sports fan, especially the Boston Red Sox and the New England Patriots. I collect toys (mostly Transformers but other stuff too), comic books, and Red Sox baseball cards. I watch an obscene amount of television and love going to the movies. I am hopelessly addicted to Wizard Rock and I write Harry Potter Fanfiction, though these days I am working on a couple of different original YA novels.
View all posts by lmb3 →
This entry was posted in Toy Reviews, Toys, Transformers and tagged Aerialbots, Combiner Wars, Generations, Quickslinger, Slingshot, Toys, Transformers, Transformers Generations. Bookmark the permalink.