Thundercracker is repainted and heavily remolded from Generations Leader Jetfire.  You can read my Jetfire review here.

Vehicle Mode: When pics showed up online of Thundercracker, I don’t think I ever looked closely at him.  He has a lot more remolding than I thought.  In vehicle mode he has remolded wings that are fixed, unlike Jetfire’s moveable wings.  The new wings have multiple ports on the bottom to facilitate his new weapons.  The mold looks amazing in blue, and since he does not include Jetfire’s boosters, he doesn’t really look like Jetfire at all. 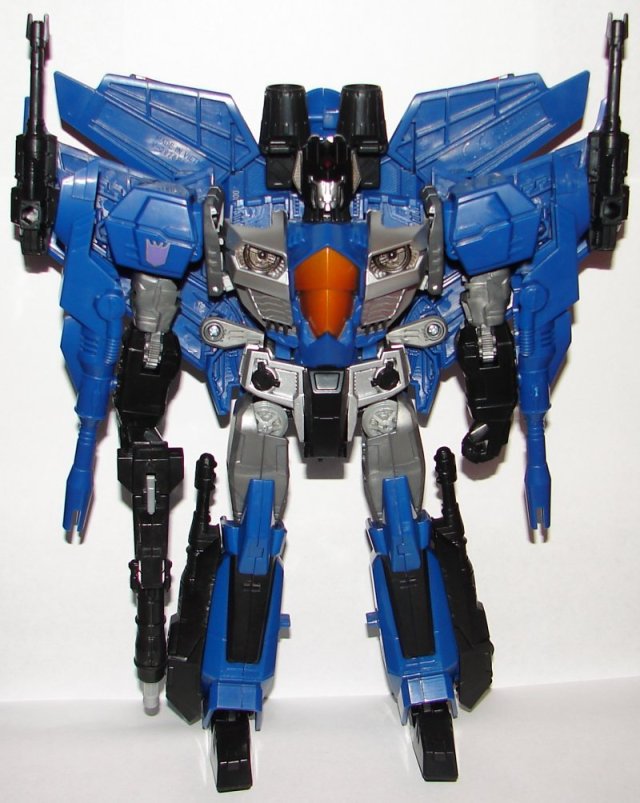 Robot Mode: In robot mode you can see his new arm cannons that look like more traditional seekers arm mounted weapons, but instead of mounting on his upper arms, they mount to his forearms.  This isn’t a huge deal, but the gun is long in back, and makes it so you can’t really bend his arm at the elbow since the un will hit his wings.  He still comes with Jetfire’s forearm mounted guns, which are left on his wings in robot mode.  His chest, head, and shoulders have been completely remolded.  He’s got a great paint job.

Overall: When this was first announced, I wasn’t sure they could make the Jetfire mold look enough like the G1 jet design to work.  Clearly they did make it work great.  As expensive as these Leader Class toys are, I want Starscream and Skywarp in this mold, and Ramjet, Thrust, and Dirge with altered wing configurations.  This one is a must.

I’m 36 years old, and I work in network tech support for a public school system. I am a huge fan of Star Trek, Transformers, Harry Potter, and Marvel Comics as well as numerous other fandoms. I’m a big sports fan, especially the Boston Red Sox and the New England Patriots. I collect toys (mostly Transformers but other stuff too), comic books, and Red Sox baseball cards. I watch an obscene amount of television and love going to the movies. I am hopelessly addicted to Wizard Rock and I write Harry Potter Fanfiction, though these days I am working on a couple of different original YA novels.
View all posts by lmb3 →
This entry was posted in Toy Reviews, Toys, Transformers and tagged Combiner Wars, Generations, Jetfire, Thundercracker, Toys, Transformers, Transformers Generations. Bookmark the permalink.