This has got to be one of the oddest G1 Transformers artifacts in existence. 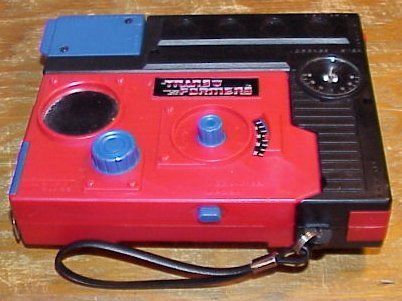 Starting from the top right, we have the periscope.  You have to tilt it up 90 degrees from the position in the photo, and look through the lens under the word “Periscope” in the picture.  You need to have both of the red switches (on top at the right and the left) in the correct position for the periscope to work.  You rotate the blue piece to look in different directions.

To use the telescope you look through the lens on the end near the word “Telescope” in the picture.  As with the periscope, the red switches need to be in the correct position for it to work.

Now things get weird.  The box says it has an altimeter, which can tell you the altitude you’re at.  There is nothing on it that says that.  There is a degree measure.  That is the clear plastic disk on the right.  There is a metal ball bearing inside.  When you pull the red plastic trigger (I call it that for a specific reason, which I’ll get to later) the plastic disk raises up and allows the ball to roll inside.  You can roll the ball around to measure out something by degrees, and then release the trigger to hold it in place.  Seems pretty useless to me.  Not sure how that can be called an altimeter.

The whistle is the red plastic and folds out on the right.

The counter is two parts.  The blue button on the bottom advances it.  The small blue knob is used to advance it manually or turn it back to zero.

The magnifying glass is on the bottom left.  The large blue knob pushes it out and retracts it.

The reflector is the silver disk.  I suppose it could also double as a crappy mirror.

The flashlight actually says “pen light” on the side, but I guess that’s essentially the same thing.  There is a slide on the side that let’s you have a wide or narrow beam.

The tape measure pulls out from the side, and can be reeled back in with the large blue knob.  Oddly, on the side it calls it a “scale”.  Kind of odd, not sure what to make of that.

It has a small compass.

The smaller blue knob on this side is a sundial.

So, that’s the eleven things it does.  Problem is, they left one out.  It is clearly meant to be a gun.  I have no idea why they didn’t just put that on the package.  It’s not like there was a shortage of toy guns back then like there is now.  It just doesn’t make any sense at all to leave it out.  In fact, it looks pretty cool as a gun since it looks like it has a huge magazine on it.

And that’s about it.  I’ve had a loose one for a long time, but just got one with the box.  It’s a cool item, I can imagine kids having a lot of fun with this.  Not sure where they got the name Tech Specometer, since it has nothing to do with tech specs.

As always, you can find over 11,500 Transformers merchandise items and collectibles at TFMuseum.com.  I have just done a major update, including a new format for listings that will hopefully make it more readable.

I’m 36 years old, and I work in network tech support for a public school system. I am a huge fan of Star Trek, Transformers, Harry Potter, and Marvel Comics as well as numerous other fandoms. I’m a big sports fan, especially the Boston Red Sox and the New England Patriots. I collect toys (mostly Transformers but other stuff too), comic books, and Red Sox baseball cards. I watch an obscene amount of television and love going to the movies. I am hopelessly addicted to Wizard Rock and I write Harry Potter Fanfiction, though these days I am working on a couple of different original YA novels.
View all posts by lmb3 →
This entry was posted in Toys, Transformers, Transformers Artifact of the Week and tagged G1, Generation One, Tech Specometer, Tech Specometer Eleven, Toys, Transformers. Bookmark the permalink.