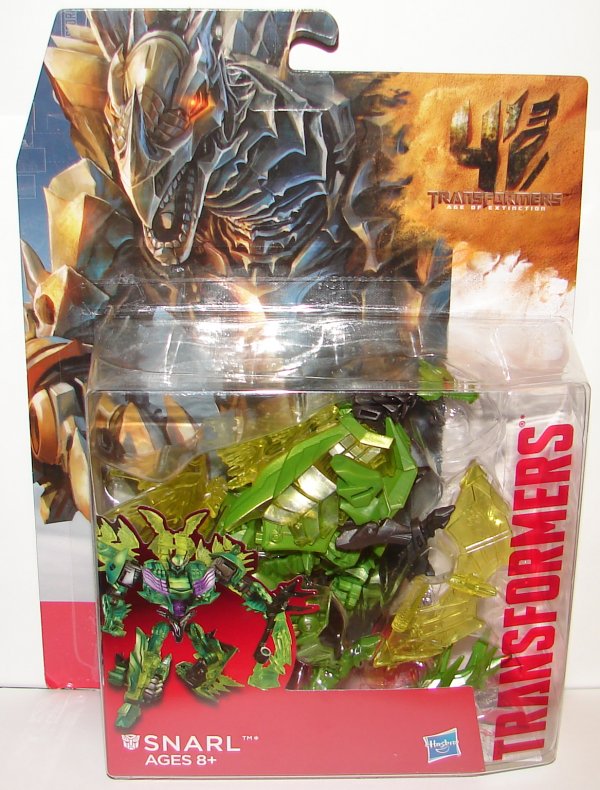 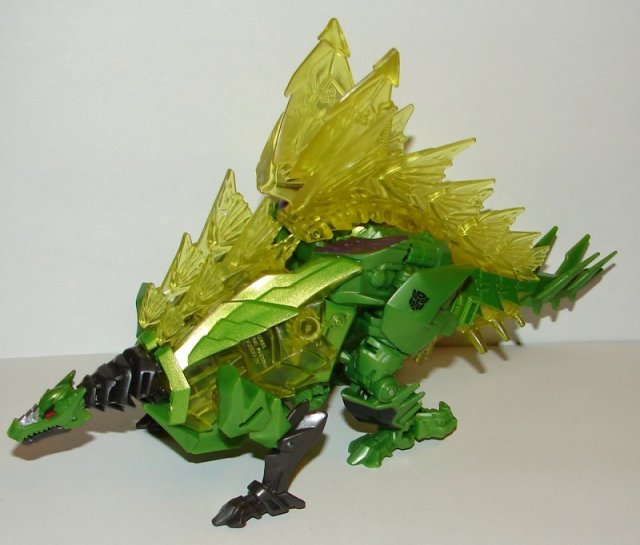 Dinosaur Mode: Snarl looks fantastic in Stegosaurus mode.  The plates on his back are awesome, and even though I’m not crazy about the color choice, it does look really cool on this mold.  He does have a design flaw.  His weapon sits between his large spikes, connecting in a slot formed by the two sides coming together.  The problem is that it doesn’t stay completely together and leaves his weapon loose.  This was not a problem on the superior San Diego Comic Con 2014 G1 version of this toy.  My guess is that the layer of chrome made all the connections tighter.  It is unfortunate that they did not fix such a glaring flaw on this toy.

Robot Mode: His robot mode looks really cool, but looks can be deceiving.  The plates behind his head make moving his arms, with his tail halves on the back, difficult.  The biggest problem is the idiotic design of his arms.  With his arms at his side, his hands sit parallel to the ground as opposed to his fists pointing at the ground like most toys do with their arms at their side.  This makes him look okay holding his weapons, but it’s not even worth putting his arms out in front of him as that will point his fists up.  It’s absurd.  I’m not too crazy about his head sculpt.

Overall: I can’t really argue against him, even with the flaws, as Snarl has always my favorite G1 Dinobot, and the Stegosaurus was my favorite dinosaur when I was a kid.  He does look awesome in dinosaur mode.

I’m 36 years old, and I work in network tech support for a public school system. I am a huge fan of Star Trek, Transformers, Harry Potter, and Marvel Comics as well as numerous other fandoms. I’m a big sports fan, especially the Boston Red Sox and the New England Patriots. I collect toys (mostly Transformers but other stuff too), comic books, and Red Sox baseball cards. I watch an obscene amount of television and love going to the movies. I am hopelessly addicted to Wizard Rock and I write Harry Potter Fanfiction, though these days I am working on a couple of different original YA novels.
View all posts by lmb3 →
This entry was posted in Toy Reviews, Toys, Transformers and tagged Age of Extinction, AOE, Deluxe, Dinobot, Dinobot Snarl, Snarl, Toys, Transformers, Transformers: Age of Extinction. Bookmark the permalink.