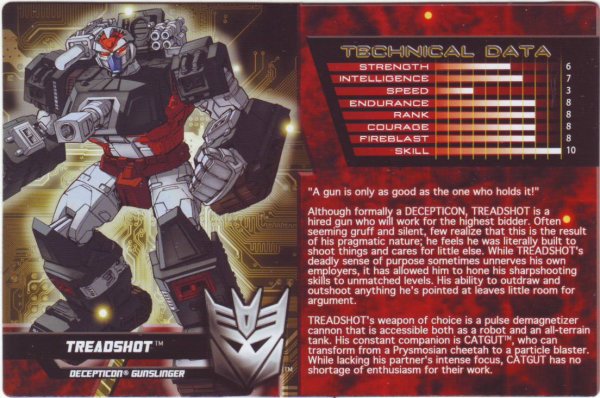 They picked the right Arms Micron mold for Catgut, but doing these without stickers or paint apps (besides the Decepticon logo) really sucks.  Just include the stickers that came with them originally, that’s all they need to do.  Just give us something so they don’t look unfinished.  This is a lazy and cheap way for them to act like they are giving us so much more.  These aren’t that expensive.  The single pack ones from Japan were sold by online retailers in the USA for only $8, so they aren’t adding that much to the cost of the toy, but I’d rather the toys be cheaper and just do away with these things if they aren’t going to paint them or include stickers.  They just look like crap.

Do we really need a transforming homage for ALL the Action Masters?  I mean, were fans really clamoring for this toy?  It’s not a bad toy, not at all, in fact, I really like it.  The black and gray with orange looks great on this mold, and it’s an awesome mold to begin with.  I love the toy, I just don’t see the need for it.  I think doing an homage to important toys and characters is great, but Fun Publications needs to stop just coming up with toy ideas to fit the number of toys they want to make and start making the toys people actually want, or at least be creative about it.  Thrustinator was creative.  This, not so much.  I’m only giving it a decent grade because the toy itself is cool, if pointless.

I’m 36 years old, and I work in network tech support for a public school system. I am a huge fan of Star Trek, Transformers, Harry Potter, and Marvel Comics as well as numerous other fandoms. I’m a big sports fan, especially the Boston Red Sox and the New England Patriots. I collect toys (mostly Transformers but other stuff too), comic books, and Red Sox baseball cards. I watch an obscene amount of television and love going to the movies. I am hopelessly addicted to Wizard Rock and I write Harry Potter Fanfiction, though these days I am working on a couple of different original YA novels.
View all posts by lmb3 →
This entry was posted in Toy Reviews, Toys, Transformers and tagged Action Master, Botcon, Catgut, Subscription Service, Subscription Service 2.0, Subscription Service 2014, Toys, Transformers, Transformers Collectors’ Club, Treadshot. Bookmark the permalink.