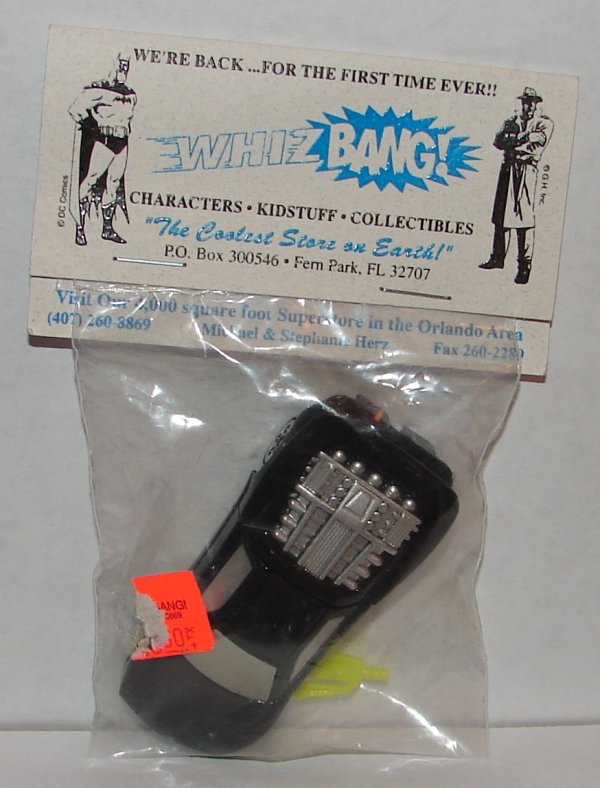 The reason that “Nightracer” is in quotes is that technically this toy has no name.  For Botcon 1995 Hasbro repainted Generation 2 Go-Bot High Beam in black and yellow with wheels from Double Clutch called Nightracer.  The colors Raksha wanted was black and blue, but Hasbro said that the colors could not be changed.  The colors may be due to gang molding of the Go-Bots and the Japanese release of G2 Go-Bots Megatron, Optimus Prime, and Soundwave.  (See TF Wiki for more on that.)

The toys were unpackaged and had blue stripes painted on by hand.  A fairly low resolution by today’s standard’s G1 Decepticon symbol (although they toy is considered G2) was added to the hood/chest.  About 300 of these were made.  This was the first time that Hasbro made a toy specifically for the convention (the G2 Breakdown for Botcon 1994 was planned for release and canceled prior to being used as an exclusive).  It is unlikely that Hasbro would have only made 300 toys, and would have had many left over, especially if the gang molding theory is correct.  Several years later, Whiz Bang toys started selling “Nightracer” toys with no stripes and no symbol in a simple plastic bag with stapled cardboard top.

I personally have never seen another one of these for sale, though Nightracer comes up on ebay from time to time.  I paid about $130 for it, but a real Nightracer goes for a lot more than that.  If nothing else, the Whiz Bang “Nightracer” is an interesting footnote to Transformers convention history.

I’m 36 years old, and I work in network tech support for a public school system. I am a huge fan of Star Trek, Transformers, Harry Potter, and Marvel Comics as well as numerous other fandoms. I’m a big sports fan, especially the Boston Red Sox and the New England Patriots. I collect toys (mostly Transformers but other stuff too), comic books, and Red Sox baseball cards. I watch an obscene amount of television and love going to the movies. I am hopelessly addicted to Wizard Rock and I write Harry Potter Fanfiction, though these days I am working on a couple of different original YA novels.
View all posts by lmb3 →
This entry was posted in Toy Reviews, Toys, Transformers and tagged Botcon, Botcon 1995, G2, Generation 2, Generation Two, Nightracer, Toys, Transformers, Whiz Bang!, Whiz Bang! Toys, WhizBang, WhizBang Toys. Bookmark the permalink.