This is the third G1 Optimus Prime repaint sold exclusively by a Japanese clothing store called, A Bathing Ape.  (Read my review of the green version here and the gray version.) 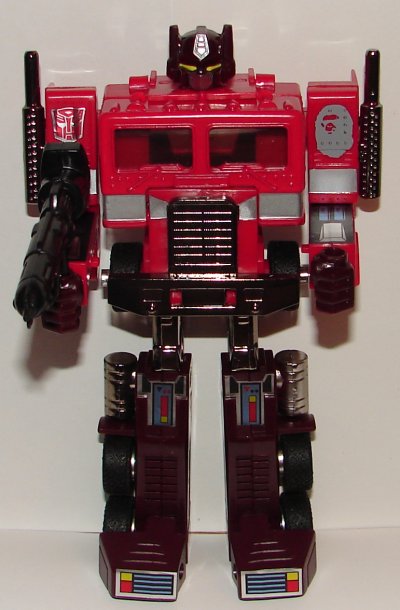 There are no mold changes on this new version of BAPE Convoy.  (Though it is notable that the original BAPE Convoy was the first toy to use the altered mold that allows him to connect to the Dark of the Moon trailer that fits on the deluxe Optimus Prime.)  He’s colored in red camouflage, his standard red, and crimson.  He looks nice, but I’m beginning to tire of these.  There are other G1 molds they could repaint.  (Though, I would love an orange one.)

The one saving grace of these BAPE Convoys is that the price is going down.  Each one is selling cheaper, so if they do two or three more (god forbid) then they should be downright cheap.

So, I guess if you’re an Optimus Prime or G1 completist, you need to have this.  Otherwise, I wouldn’t bother.  Unfortunately for me, I’m both.

I’m 36 years old, and I work in network tech support for a public school system. I am a huge fan of Star Trek, Transformers, Harry Potter, and Marvel Comics as well as numerous other fandoms. I’m a big sports fan, especially the Boston Red Sox and the New England Patriots. I collect toys (mostly Transformers but other stuff too), comic books, and Red Sox baseball cards. I watch an obscene amount of television and love going to the movies. I am hopelessly addicted to Wizard Rock and I write Harry Potter Fanfiction, though these days I am working on a couple of different original YA novels.
View all posts by lmb3 →
This entry was posted in Toy Reviews, Toys, Transformers and tagged BAPE, BAPE Convoy, BAPE Optimus Prime, BAPE x, Convoy, Optimus Prime, Toys, Transformers. Bookmark the permalink.