Box:  The boxes for the deluxe toys have no windows.  I assume this is due to the lack of paint apps (see below).  They look kind of awful without the stickers, so leaving out the window will hide that.  Good marketing, but it’s only necessary because the toys are so plain without the stickers. 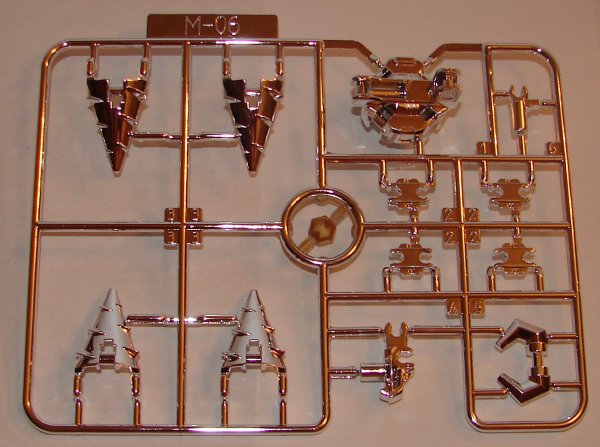 Kit:  The kits are fairly easy to assemble, and so far the stickers seem to be staying on well.  This kit is silver chrome coated.  By putting the chrome on the plastic, it causes problems putting the kit together, because the chrome makes it slightly larger.  It’s just a minute amount, but it is enough to create problems assembling the kit.  You need to shave off the chrome on the inside of the hinges.  This is very difficult, and it is very easy to damage the exposed chrome while doing it.  Ss good as the final toy looks when assembled, I would have preferred it not to be chromed.  Each Arms Micron includes something like a spark crystal, but I’m not sure if that is the intent of it.  A sticker goes on before the outer translucent plastic to form it.  They look nice, but I had some problems getting the crystal to stay in on some of them.  Might need a little glue. 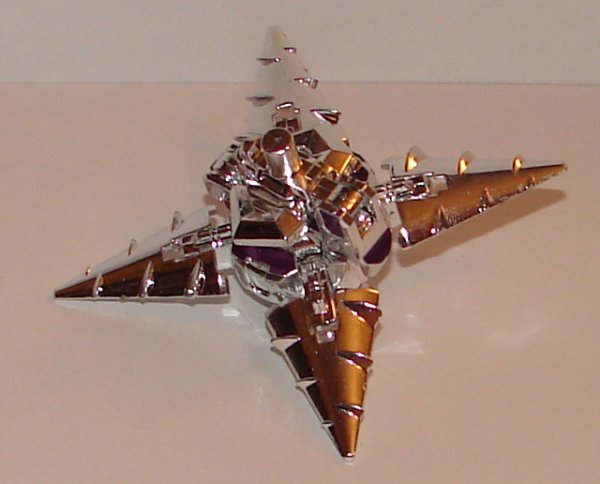 Weapon Mode:  Balo was never my favorite Arms Micron.  Being in Silver doesn’t really help.  He is a drill or a shuriken, and as he has no way of holding a weapon in his hand, he’s pretty useless to Thundercracker. 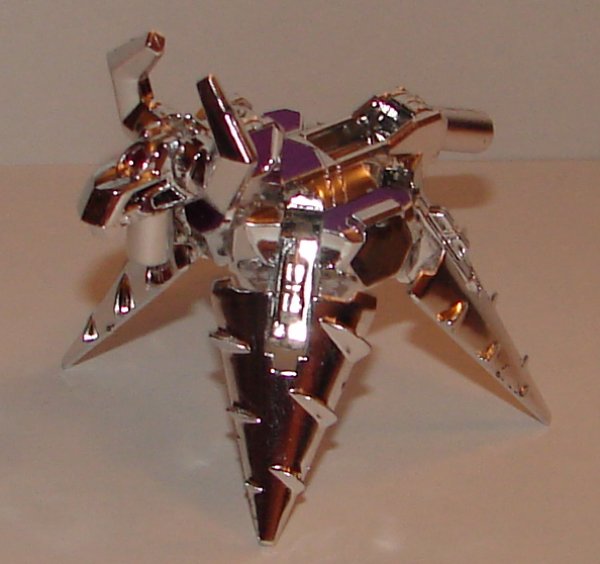 For more on this mold, please see my blog about Arms Micron Skywarp. 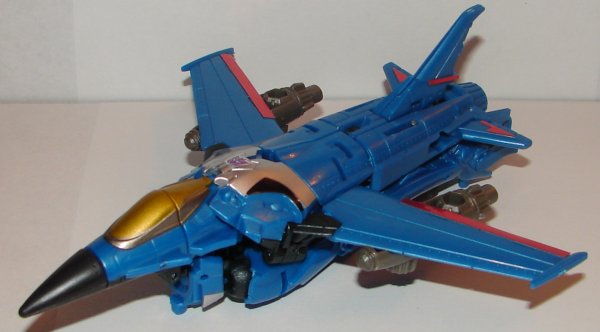 Vehicle Mode:  Thundercracker is a direct repaint of Arms Micron Thundercracker who was a remold of First Edition Starscream.  The paint differences are very obvious.  As you can see, he has a completely different paint job (obviously).  It’s unfortunate that we aren’t (yet) getting a version of Starscream using the Japanese mold with the wing pods.

Robot Mode:  He looks pretty great in robot mold.  My only complaint is the soft plastic fin on his forehead will not stay in the down position.  Probably just badly packaged so it was in the wrong position and got stuck that way.  Nice looking though, even if it does suck that he can’t hold his weapon.

I’m 36 years old, and I work in network tech support for a public school system. I am a huge fan of Star Trek, Transformers, Harry Potter, and Marvel Comics as well as numerous other fandoms. I’m a big sports fan, especially the Boston Red Sox and the New England Patriots. I collect toys (mostly Transformers but other stuff too), comic books, and Red Sox baseball cards. I watch an obscene amount of television and love going to the movies. I am hopelessly addicted to Wizard Rock and I write Harry Potter Fanfiction, though these days I am working on a couple of different original YA novels.
View all posts by lmb3 →
This entry was posted in Toy Reviews, Toys, Transformers and tagged Arms Micron, Balo, Silver Metal Balo, Thundercracker, Toys, Transformers, Transformers: Prime. Bookmark the permalink.