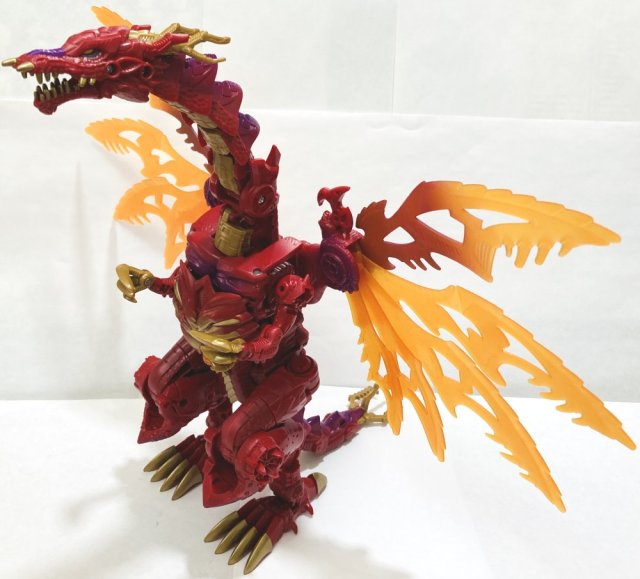 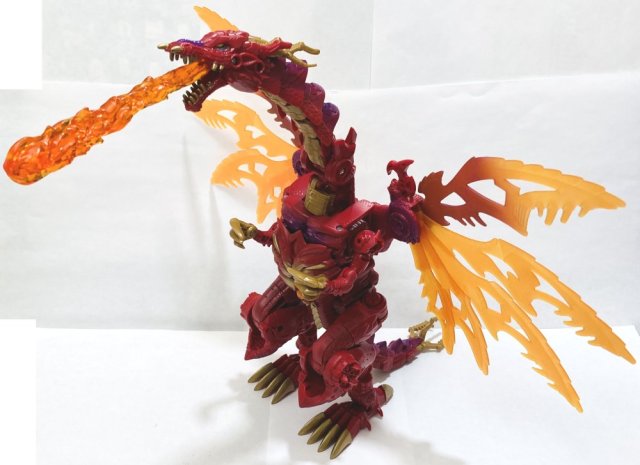 Beast Mode: I have a love hate relationship with Megatron. In Beast mode he looks pretty good, but his chest plate does not quite close all the way. I really love the wings, but I find his bent up legs hard to get into the same exact position so he stands up straight. He has a great head sculpt, but his neck seems a bit thin. His colors are great, and I love that his wings are frosted orange rather than translucent, but the way his claws are bent up and pointed inward looks weird. More good than bad on the average, I guess, but he’s far from a home run.

“It seems I have once again been cheated of my victory. But beware the dragon’s wrath! Vengeance will be mine!” – Megatron, “Beast Wars”, “Master Blaster”

Robot Mode: In robot mode, Megatron is definitely more good than bad. His colors are awesome, and I love the way his wings fold up. I wish his dragon arm was not so ridiculously long, but I guess there is not much they could do about that. More annoying is that his left shoulder is lower than his right shoulder, and that really makes him look off. Could be I have something not transformed correctly, but I don’t think so. The biggest problem with his robot mode is his chest. His dragon fingers are supposed to plug into it on the sides, but nothing I do will make them actually plug in correctly, so they are sticking out as you can see. If they plugged in properly, it would be very cool, and I could almost forgive the weird way they look in dragon mode, but as is, they should have just painted the gold on his chest and folded his claws up behind it. He does have a great head sculpt.

“I am Alpha and Omega. The beginning, and the end. I am that which is, which was, and is yet to come. And you will know my name is Megatron, when I lay my vengeance upon you.” – Megatron, “Beast Wars”, “Nemesis, Part II”

Overall: Megatron is far from a home run, but he’s not terrible either. I just think he could have been better. If I were Hasbro, I might have made him Commander Class, make him a little bigger, and included some other Beast Wars related stuff to make up for the price tag. I just think making him a little bigger would have made it either to fix some of the issues. I would recommend him, since we aren’t likely to get another one anytime soon. And now begins the wait for Cryotek.

“And there came a hero who said, ‘Hurt not the earth. Nor the sea. Nor the trees. Nor the very fabric of time!’ But the hero would not prevail!” – Megatron, “Beast Wars”, “Nemesis, Part II”