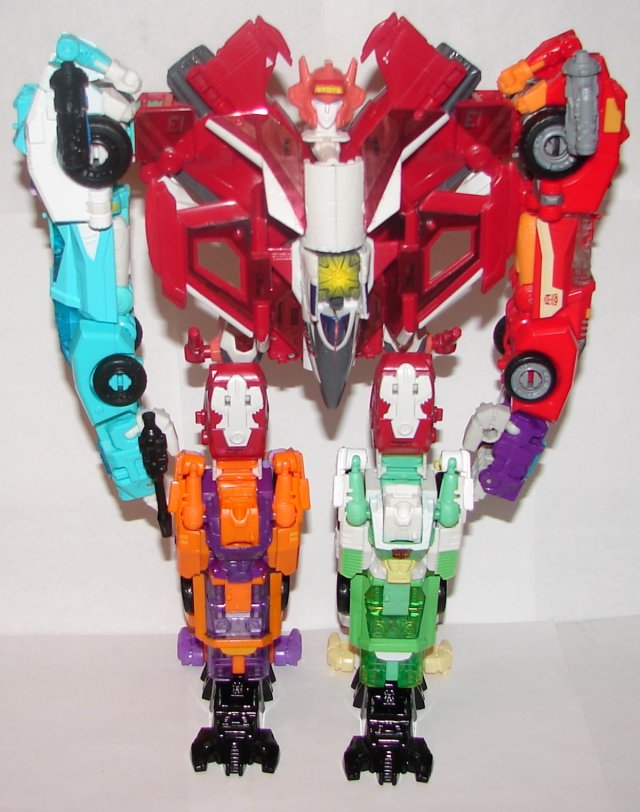 Orthia is not as bad as I thought she would be based on the photos I’ve seen online. That’s not to say she’s great either, but she’s not a total dumpster fire. I don’t like Elita-1 in this mode. The whole look of the torso with the wings on the sides of the jet fuselage sticking out in front doesn’t look right. The gaps and cutouts in the wings don’t help. The stickers look like garbage. I don’t like the silly Autobot Enigma. Having said that, I do like the limbs a lot better than I thought I would, though the legs of Lancer and Greenlight fold back to become the back of Orthia’s legs and don’t quite snap in place as well as they could. You’ll notice Novastar’s hand has been swapped out for Dreadwind’s because I couldn’t find Novastar’s. I also like the name Orthia, as it is the Spartan name of the Greek God Artemis. Orthia is, if you just look at the toy itself, not too bad even with Elita-1’s poor design. As far as the makeup of the team is concerned, I have never liked faux combiners, but I have far less of a problem with them putting a team together as a combiner like they did with the Dinobots, so by that measure, this toy works really well. I am not a fan of using the same base mold for all four limbs, but that’s more about Hasbro not giving these characters their own unique toys, and that the vehicle modes kind of suck, than how I feel about Orthia. Unfortunately there is a lot more to consider here than the toy itself. I don’t consider this toy to even exist as an official toy. These five toys were not released in the same line. Three were from Power of the Primes, one from Siege, and one from Selects. (You can make the argument that Lancer could count as a Siege toy, but Selects has included toys from multiple lines, and will probably include more in the future, so I think it should be considered it it’s own line.) It doesn’t help that two of them are not available at retail in the USA. There is no excuse for releasing them across different lines, and making two of them online exclusives is even worse. They could have easily included Greenlight and Lancer in the fourth (and final) wave of Power of the Primes Deluxe Class toys which only included one new toy, Novastar. But Hasbro didn’t bother to do that. Orthia was an afterthought after they had already announced that the combiner Elita-1 formed with four random toys would be Elita Infinite. The name Orthia does not exist on any instruction sheet or box, and no instructions for how to combine them was included with any of the five toys. Hasbro never intended to complete this set and did so because…well, honestly I have no idea why they did. They could have finished Starscream or Inferno, why didn’t we get those too? My guess is that they were trying to make up for the complete pile of garbage that was Victorion. These are the characters they should have done for a female combiners from the start, done the right way and not all from the same mold.

Overall: Orthia may no be a terrible toy, but Hasbro’s half assed job of releasing it makes it really hard for me to like it. This is like something Fun Publications would do, and I can imagine no worse insult I could hurl at Hasbro.