A couple of months ago I picked up a set of Transformers Coca-Cola Bottle Caps from Brazil. It was a set of twelve. I just picked up another set, this one containing ten caps. The seller told me these are from the early 1990s. I am assuming the other set I got came out first since it contained Optimus Prime and Megatron. I’m going to refer to this set as series two, but to be honest, I don’t know if there are any other sets, so it might not be a second series. There are some interesting differences between the two sets. Let’s start with the card they can be mounted on. 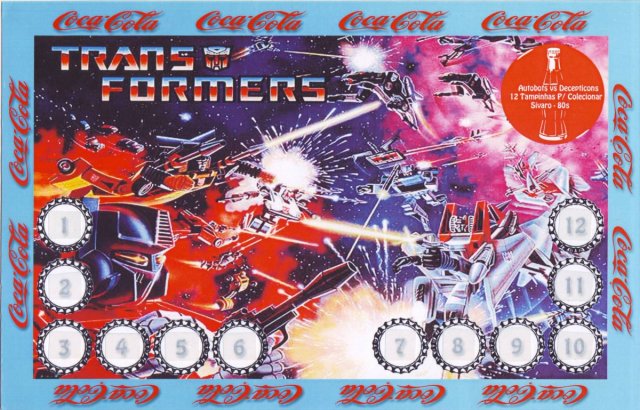 The first set used the G1 USA box back art for the card, but this set uses the 1986 Japanese box back art. I suppose that could mean there is a second set that came out between these, but given the random nature of the characters included, that would probably be reading way too much into it. The first card was blank on the back, but this one is not. There is no date, and the only text (other than the Hasbro and Transformers logos) translates to “Transformers Caps Collection”. Interestingly this is followed by “04”. Could that mean this is a fourth series of caps? Certainly not impossible, but in my review of series one I noted that Thundercracker was missing. He’s in this series. Seems odd they would have waited for a fourth series to include him. On the other hand, this set includes one random Insecticon, Bombshell, so if this was a fourth series, the others would likely have been in the previous series. Unless “04” is meant to be the year, I’m not sure what else it might mean. As I’ve been told these were early 1990s, 2004 wouldn’t make any sense.

The caps themselves are also different. The first series caps had the Coca Cola logo on top, but these ones do not. The text around the edges is basically the same info, though the way it’s laid out is different. Hard to know if that means anything. Could be they just happened to change the cap design between the two releases, or it could be they were released years apart, or two of a number of series. This doesn’t really narrow things down much.

The quality of the coins is the most striking difference between the series one and two. Series one had sharp vibrant graphics on a smooth surface. The art on series two seems to be less sharp. This is compounded by a coating of plastic that covers the art. This coating is not smooth, and the flash form my camera reflecting off it makes them hard to photograph. Some pics came out better than others, but they all have this coating. 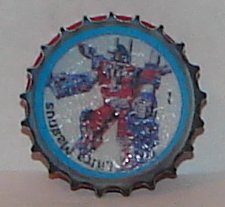 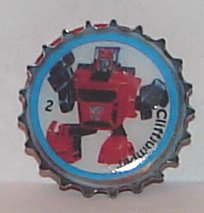 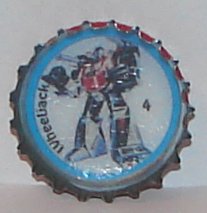 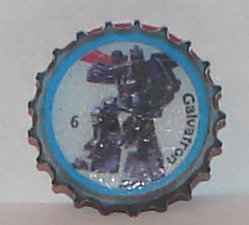 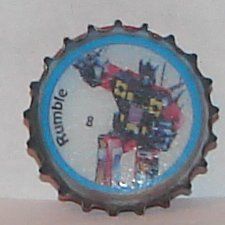 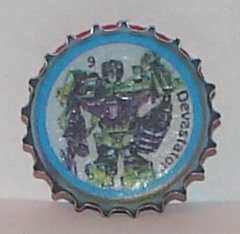 Given series one, this set seems less random and may give some context to the selections in series one. Ultra Magnus and Galvatron along with Rodimus Prime from series one are the movie leaders, so I can see the logic in those three all being included rather than Rodimus Prime alone which was pretty random. Prowl, Wheeljack, and Sideswipe makes sense giving us along with Ratchet, Jazz, and Ironhide, most of the major Autobot cars from season one. As I mentioned earlier, Thundercracker completes the original three seekers. Bombshell seems an odd choice as the only Insecticon. It remains to be see if there are any others sets of these out there. I still can’t find any documentation of them online, which seems odd.

As always, you can find over 16,000 Transformers artifacts from every Transformers series and generation at TFMuseum.com.

I’m 36 years old, and I work in network tech support for a public school system. I am a huge fan of Star Trek, Transformers, Harry Potter, and Marvel Comics as well as numerous other fandoms. I’m a big sports fan, especially the Boston Red Sox and the New England Patriots. I collect toys (mostly Transformers but other stuff too), comic books, and Red Sox baseball cards. I watch an obscene amount of television and love going to the movies. I am hopelessly addicted to Wizard Rock and I write Harry Potter Fanfiction, though these days I am working on a couple of different original YA novels.
View all posts by lmb3 →
This entry was posted in Transformers, Transformers Artifact of the Week and tagged Bombshell, Bottle Cap, Cliffjumper, Coca-Cola, Devastator, Frenzy, Galvatron, Generation 1, Generation One, Prowl, Rumble, Sideswipe, Thundercracker, Toys, Transformers, Ultra Magnus, Wheeljack. Bookmark the permalink.