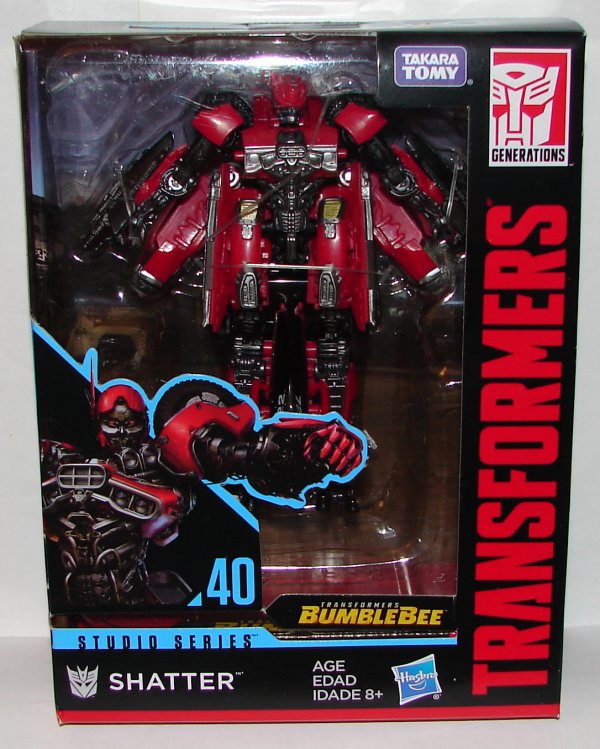 Vehicle Mode: Shatter looks amazing in vehicle mode. To my recollection, she’s pretty accurate to the movie, and she has great paint apps. The only problem is that she’s tiny. She’s barely bigger than Legends Class toys were a few years ago.

Robot Mode: Unfortunately, her robot mode isn’t anywhere near as good. I do not recall if Shatter had a battle mask like Bumblebee. If so, this must be based on that, because it looks nothing like her face in the movie. It actually looks like crap. Speaking of crap, the plastic is garbage. I’ve bought knockoffs at the dollar store that were better quality. Her arms pop off constantly, as do her vehicle front fenders on her back. Her robot mode doesn’t look bad, and has great paint apps, but that head sculpt sucks so badly it’s hard to care.

Overall: Hopefully they will give us a Studio Series Jet Mode Shatter that doesn’t suck. Unfortunately, if you want Shatter, this is probably all you’re going to get.

I’m 36 years old, and I work in network tech support for a public school system. I am a huge fan of Star Trek, Transformers, Harry Potter, and Marvel Comics as well as numerous other fandoms. I’m a big sports fan, especially the Boston Red Sox and the New England Patriots. I collect toys (mostly Transformers but other stuff too), comic books, and Red Sox baseball cards. I watch an obscene amount of television and love going to the movies. I am hopelessly addicted to Wizard Rock and I write Harry Potter Fanfiction, though these days I am working on a couple of different original YA novels.
View all posts by lmb3 →
This entry was posted in Toy Reviews, Toys, Transformers and tagged Bumblebee, Shatter, Studio Series, Toys, Transformers, Transformers Bumblebee, Transformers Studio Series. Bookmark the permalink.