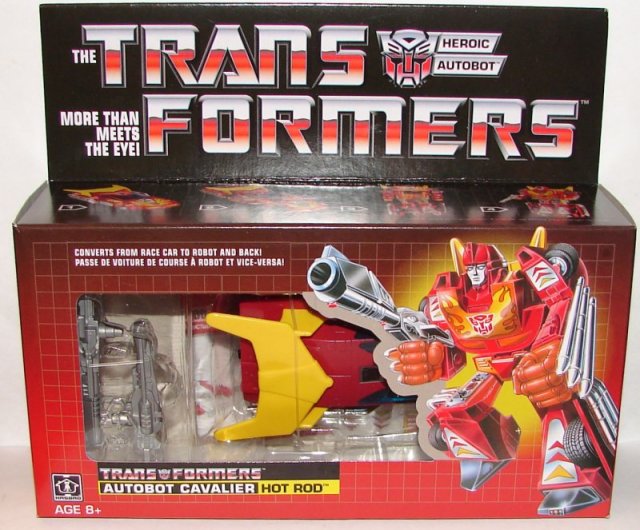 I complain about Hasbro a lot, but I also give them credit when they get something right. Not only did they give us a G1 style box, but it has an actual box flap! That is so cool. Hasbro gets full points for that, but of course they managed to screw it up. They put him in the box upside down.

This is what he should look like. It’s unfortunate, because it means you really have to open it if you want to display him properly in the box. 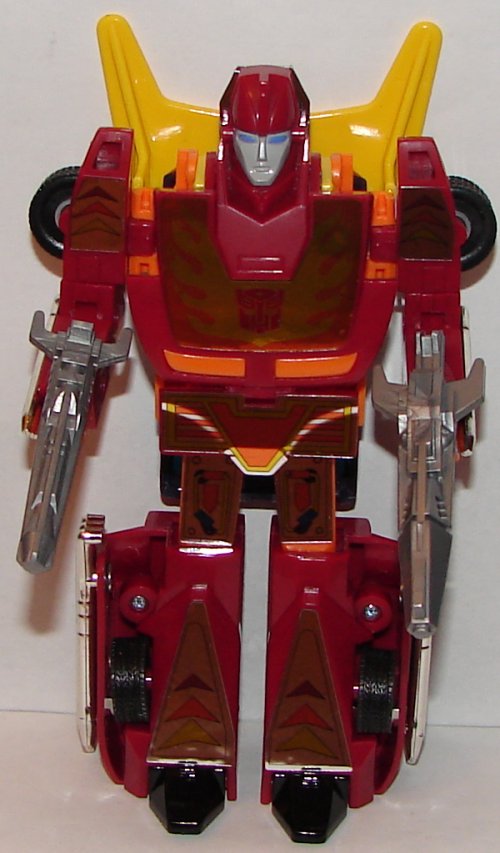 And here we have Hot Rod in all is G1 glory. Such an amazing toy even after all these years. He has shiny metallic stickers, and unfortunately, they don’t photograph well. The mold used is from “The Transformers Collection” release from 2004 in Japan, but Target Master Firebolt was not included. This means he has the larger ports in his hands.

Overall: If you don’t have a G1 Hot Rod, do yourself a favor and get one of these. Even if you do, get one. As I always say, you can never have too many versions of G1 toys.

I’m 36 years old, and I work in network tech support for a public school system. I am a huge fan of Star Trek, Transformers, Harry Potter, and Marvel Comics as well as numerous other fandoms. I’m a big sports fan, especially the Boston Red Sox and the New England Patriots. I collect toys (mostly Transformers but other stuff too), comic books, and Red Sox baseball cards. I watch an obscene amount of television and love going to the movies. I am hopelessly addicted to Wizard Rock and I write Harry Potter Fanfiction, though these days I am working on a couple of different original YA novels.
View all posts by lmb3 →
This entry was posted in Toy Reviews, Toys, Transformers and tagged G1, Generation 1, Generation One, Hot Rod, Toys, Transformers, Vintage G1, Walmart Exclusive. Bookmark the permalink.