To call this a “raceway” is a bit of a misnomer. There is only one track, so there is no way to actually “race”. The launcher is not a spring-loaded mechanism, which is the real failure of this toy. The first time I slammed my hand down on it to send the car up the track, the car ended up across the room. Okay, it’s meant for a five-year-old, not a forty-one-year old, but I had a hell of a time hitting it just hard enough to send it around the track without sending it flying. This should have had a spring loaded mechanism. Every so many times around the track, Optimus Primal chomps down and sends the bot into the jail. You can place another car in the gray hinged piece at the top of the track to send down the track, but all that will do is send two cars down the track back into the launcher. Nothing about this toy makes a lot of sense, but I’m sure kids will have fun with it. 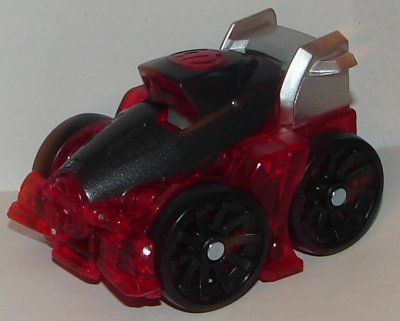 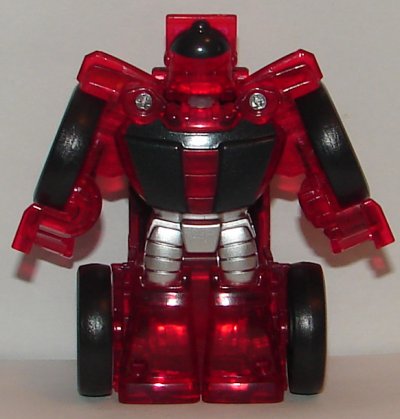 Morbot looks great in black and translucent red. I hope we get a show colored version in a later wave.

Overall: I like the Morbot. Can’t say much for the track.

I’m 36 years old, and I work in network tech support for a public school system. I am a huge fan of Star Trek, Transformers, Harry Potter, and Marvel Comics as well as numerous other fandoms. I’m a big sports fan, especially the Boston Red Sox and the New England Patriots. I collect toys (mostly Transformers but other stuff too), comic books, and Red Sox baseball cards. I watch an obscene amount of television and love going to the movies. I am hopelessly addicted to Wizard Rock and I write Harry Potter Fanfiction, though these days I am working on a couple of different original YA novels.
View all posts by lmb3 →
This entry was posted in Toy Reviews, Toys, Transformers and tagged Chomp and Chase Raceway, Flip Racers, Morbot, Optimus Primal, Rescue Bots, Toys, Transformers. Bookmark the permalink.