Back in April of 2015 I did a blog about HG Toys Transformers Stamp Bots. You can read that original blog here. In that blog, I theorized that the Stamp Bots were released in three different waves, but I was missing one of them, the second release Starscream packed on the right side of the card with a blue cap. I am missing him no more. 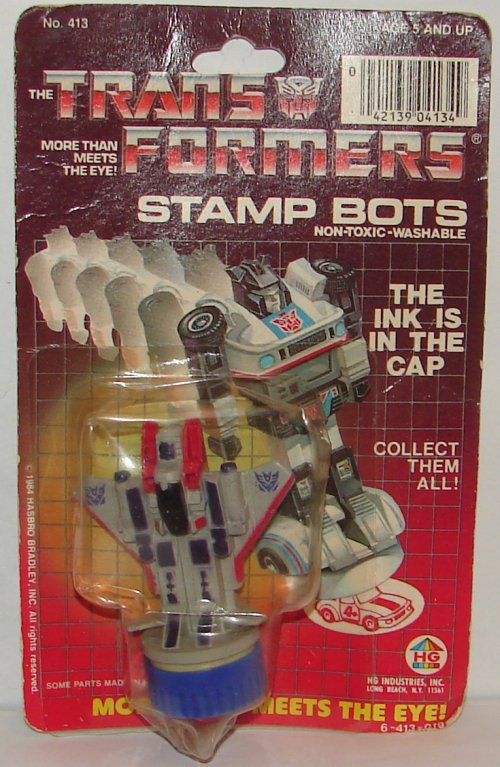 I have added this photo to my Complete Visual Guide to HG Toys Transformers Stamp Bot Variations.

As always, you can find over 14,000 Transformers merchandise items and collectibles at TFMuseum.com.

I’m 36 years old, and I work in network tech support for a public school system. I am a huge fan of Star Trek, Transformers, Harry Potter, and Marvel Comics as well as numerous other fandoms. I’m a big sports fan, especially the Boston Red Sox and the New England Patriots. I collect toys (mostly Transformers but other stuff too), comic books, and Red Sox baseball cards. I watch an obscene amount of television and love going to the movies. I am hopelessly addicted to Wizard Rock and I write Harry Potter Fanfiction, though these days I am working on a couple of different original YA novels.
View all posts by lmb3 →
This entry was posted in Transformers, Transformers Artifact of the Week and tagged G1 Stamp Bots, Generation 1, Generation One, Jazz, Optimus Prime, Rubber Stamps, Snarl, Stamp Bot, Starscream, Thrust, Toys, Transformers, Ultra Magnus, Wheeljack. Bookmark the permalink.