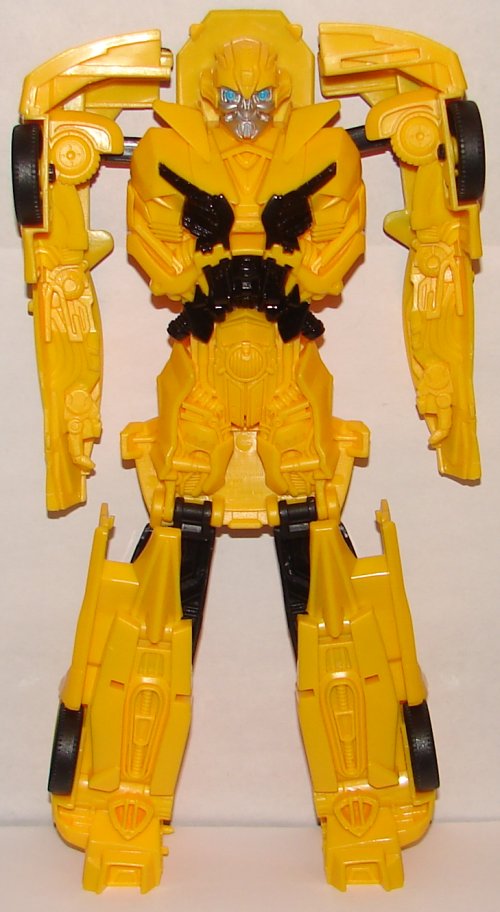 Bumblebee’s car mode looks great.  I wish they had painted his roof and spoiler.  If they had it would be one of the best vehicle mode representations of Bumblebee’s new car mode.  His robot mode is a dumpster fire.

With a few more paint apps his truck mode would be okay, a least the front half would be.  His robot mode is not as bad as Bumblebee’s, but not exactly good either.

Overall: Titan Changers have a specific purpose for Hasbro.  They are meant to be compatible with 12 inch figures for other lines like Marvel and Star Wars, and the cheap price tag ($15 while non-transforming 12 inch figures are $10) means you can only do so much with the transformation.  I get why they make these, and they succeed in what they are intended for.  Unfortunately, it is one more lackluster entry in the Transformers: The Last Knight toyline.

I’m 36 years old, and I work in network tech support for a public school system. I am a huge fan of Star Trek, Transformers, Harry Potter, and Marvel Comics as well as numerous other fandoms. I’m a big sports fan, especially the Boston Red Sox and the New England Patriots. I collect toys (mostly Transformers but other stuff too), comic books, and Red Sox baseball cards. I watch an obscene amount of television and love going to the movies. I am hopelessly addicted to Wizard Rock and I write Harry Potter Fanfiction, though these days I am working on a couple of different original YA novels.
View all posts by lmb3 →
This entry was posted in Toy Reviews, Toys, Transformers and tagged Bumblebee, Optimus Prime, The Last Knight, Titan Changers, TLK, Toys, Transformers, Transformers The Last Knight. Bookmark the permalink.