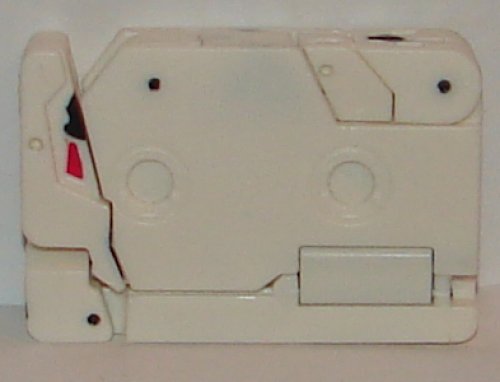 I’ve wanted to get my hands on one of these for a long time.  Bullhorn was an exclusive to a convention called Minicon.  Or maybe it was Wi-Con.  I don’t know.  The scumbag who ran the con (pun intended) stole the idea for this toy from a friend of mine, and then misrepresented himself as working with my friend in order to get it made.  It says its numbered out of one hundred, but I have it on good authority that way more or them were made.  As to the toy itself, Bullhorn’s cow mode is fantastic.  Unfortunately, he doesn’t actually transform into a cassette.  He transforms into a white brick.  Since he sort of turns inside out, they should have been able to paint (or sticker) the cassette on both sides.  Instead they didn’t make one side look like a cassette.  So, to sum it, it was a great idea stolen by a scumbag and poorly executed.  Should have called him Bullshit.

I’m 36 years old, and I work in network tech support for a public school system. I am a huge fan of Star Trek, Transformers, Harry Potter, and Marvel Comics as well as numerous other fandoms. I’m a big sports fan, especially the Boston Red Sox and the New England Patriots. I collect toys (mostly Transformers but other stuff too), comic books, and Red Sox baseball cards. I watch an obscene amount of television and love going to the movies. I am hopelessly addicted to Wizard Rock and I write Harry Potter Fanfiction, though these days I am working on a couple of different original YA novels.
View all posts by lmb3 →
This entry was posted in Toy Reviews, Toys, Transformers and tagged Bullhorn, Keith’s Fantasy Club, KFC, Minicon, Toys, Transformers, Wi-Con. Bookmark the permalink.