So, this box set includes the original version of Bumblebee and Steeljaw that are identical to the original releases.  If you missed them first time around, this is a good opportunity to grab them.

Other than that, the set includes some various accessories.  I don’t think any of these are new. 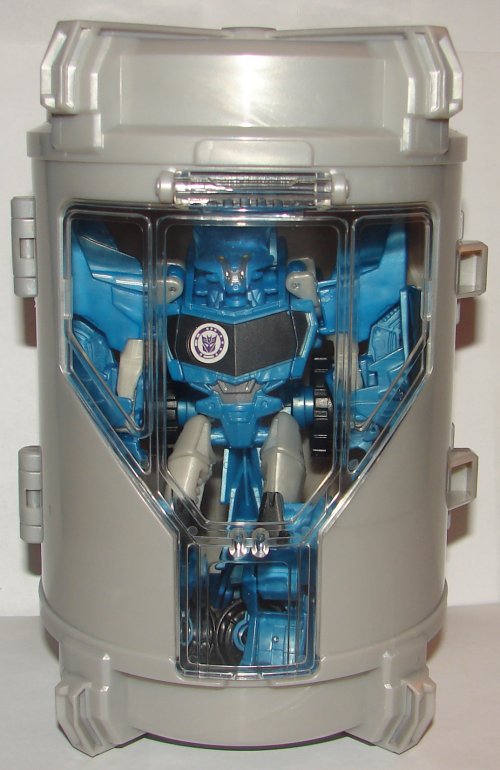 The stasis pod is kind of cool.  It’s high quality plastic and Steeljaw fits inside.  Doesn’t really do anything though.

Overall: At $40, it’s kind of expensive for some repainted weapons and a stasis chamber if you already have Steeljaw and Bumblebee.  Might be worth picking up on clearance.

I’m 36 years old, and I work in network tech support for a public school system. I am a huge fan of Star Trek, Transformers, Harry Potter, and Marvel Comics as well as numerous other fandoms. I’m a big sports fan, especially the Boston Red Sox and the New England Patriots. I collect toys (mostly Transformers but other stuff too), comic books, and Red Sox baseball cards. I watch an obscene amount of television and love going to the movies. I am hopelessly addicted to Wizard Rock and I write Harry Potter Fanfiction, though these days I am working on a couple of different original YA novels.
View all posts by lmb3 →
This entry was posted in Toy Reviews, Toys, Transformers and tagged Bumblebee, Decepticon Island Showdown, RID, Robots in Disguise, Stasis Pod, Steeljaw, Toys, Transformers, Transformers: Robots in Disguise. Bookmark the permalink.