G2 Starscream is a repaint of Transformers Classics Deluxe Starscream. 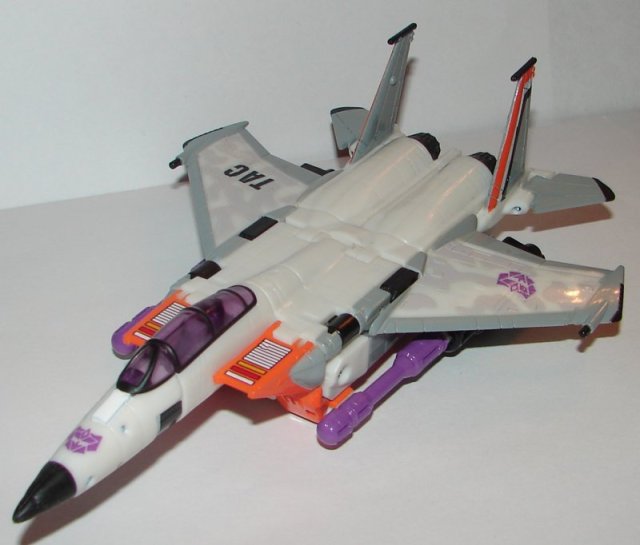 At last, we have a truly great toy in the 2015 Subscription Service!  That’s a bit sad.

The first Subscription in 2013 had two great toys in Breakdown and Ultra Mammoth and two decent toys in Slipstream and Scourge.  In 2014 we had a complete turkey in Fisitron, and other than that, they were all great to awesome.  This leaves 2015 seeming like a major let down as all except Nacelle and G2 Starscream are completely forgettable, though we don’t know what the seventh figure is yet.  Below my review of Starscream, I’ve got some thoughts on the 2016 Subscription Service as well.

I always give Botcon credit where it’s due (it’s just not that often).  I love G2 Starscream.  He looks amazing.  This one was long overdue.  Unfortunately, he is not without flaw.  Hs left wing droops.  I can’t tell if this is mold degradation or just poor quality control.  I don’t recall this issue with Nacelle, and it would seem odd that after so many uses the mold suddenly has problems with what we were told at Botcon last year would be it’s last use (I believe that’s what I read).  Since it’s one side, it’s also not related to the other problem with the toy.

In early September Fun Pub sent out a message informing everyone who purchased this year’s subscription service that there was an assembly error on the G2 Starscream and Nacelle (the latter of which had already been released).  To sum it up, the message said that the pieces that hold the wings onto the body of the planes were swapped.  This only affects transformation in that the wings click and have to be forced a bit during transformation.  They also reported that Nacelle’s rear wings were swapped.  If you read my review of Nacelle you know that I did not notice either of these issues, so they aren’t major, but that really isn’t the point, is it?

First off, I give Fun Pub credit for informing customers of the issue.  It is unfortunate that, to my knowledge, they have never done this with any of the previously misassembled toys.  (Well, except for the incorrect guns with SG Drift, for which they infamously said, we said you’d get two guns, we never said you’d get the right guns.)  Their excuse is that they are very short runs of toys and some have not been produced in a long time.  I completely buy that as why it happened.  Unfortunately, that is really not the issue.

We are paying a ton of money for these toys.  If anything, for what we are paying, we have every right to expect MORE quality, and not less.  The fault may be on Hasbro and their factory, though someone from Hasbro had some interesting comments on that at Botcon 2014 that I blogged about last year.  But it can’t be ignored that Fun Pub is buying defective product and selling it to us at the same price as if it weren’t defective.  They do this over and over.

Back when the registration system didn’t work for Botcon again this year, there was a statement made about it being Fun Pub’s issue and was not a reflection on the brand.  That sounded to me like Hasbro was tired of Fun Pub making the Transformers brand look bad.  Nothing makes the brand look worse than defective toys sold at exorbitant prices.  Maybe Hasbro has to limit the number of toys Fun Pub can have each year so that they can put the attention into them to make sure they are made correctly.  Maybe Hasbro needs to replace toys that are defective.  That is completely Hasbro’s responsibility, but at the end of the day, Fun Pub is still selling defective toys at outrageous prices and their answer is this:

It may not be their fault (and I know I’ve used that before), but it is unconscionable to continuously provide defective merchandise at these inflated prices.  That is something Fun Pub and Hasbro have no defense for.

I just got a USPS shipping label created notice for an item shipping from Azle, Texas this week.  That’s where all the recent Subscription Service toys have shipped from, so I presume that Krok and the seventh mystery figure will be shipping soon.  I will be interested to see what the last figure is.  I’m expecting a Legends Class figure, but I’m hoping for the Red Seeker.  With the 2015 subscription serive ending, I thought I’d take a look at 2016.

2016 looks amazing for the most part.  Needlenose with Zigzag and Sunbeam, Ruckus, Spinister with Singe and Hairsplitter, Windsweeper, Bludgeon and Impactor (click the links for the preview images).  I am not at all happy with Impactor.  Making random combiner limbs like they did in 2014 with Fisitron makes no sense.  Now, if we’re going to get the rest of the Wreckers combiners at Botcon or in 2017, then that’s different, but for now he’s just a random limb, and that’s not at all interesting to me.  There insistence on doings things with a theme (Combiner Wars for the 2016 Subscription Service) rather than making the best toys, really detracts from the overall offering.

While I think the combiner team is awesome, they combine in Thunder Mayhem who has Thunderwing’s head.  First, that’s got to be the worst combiner name ever by a lot (except maybe for Victorion).  Second of all, Thunderwing is not a combiner, so making him one is ridiculous.  Making non combiner characters as limbs is one thing, making them the combined modes is something else entirely.  They should have done a completely new head with a new character as the combiner, but we know that they shy away from new ideas.

Overall it looks like an amazing set next year, which will as usual probably not ship until summer as usual.  At this point my guess is that the seventh figure will either be a repaint of Shockwave or Powerglide as a weapon for the set.  I’m not sure if the Groove mold can combine with the Bludgeon mold the way it did with Hotspot.  My guess is that it can’t.  If, as unlikely as it seems, the seventh figure this year is a deluxe, then that obviously opens up a lot more options for next year’s freebie, but I’m not holding my breath.

While I’m on the subject of Combiners, Fun Pub has already revealed mockups for two of next year’s toys from the box set.  Breakdown with a cat head as Ravage (insert eye roll here, it looks awful) and Rook (also used for Impactor) as Transmetal Tarantulas (not horrible, but not exciting either).  The other three seem to be the Tripredacus council, one of which is General Ramhorn from what I assume is the as yet not officially announced Technobot Nosecone mold, which is a remold of Brawl.  None of this excites me.  This is clearly a case of coming up with a theme and them forcing the available molds to work with it instead of looking at the available molds and picking good toys to make from them.

I’m 36 years old, and I work in network tech support for a public school system. I am a huge fan of Star Trek, Transformers, Harry Potter, and Marvel Comics as well as numerous other fandoms. I’m a big sports fan, especially the Boston Red Sox and the New England Patriots. I collect toys (mostly Transformers but other stuff too), comic books, and Red Sox baseball cards. I watch an obscene amount of television and love going to the movies. I am hopelessly addicted to Wizard Rock and I write Harry Potter Fanfiction, though these days I am working on a couple of different original YA novels.
View all posts by lmb3 →
This entry was posted in Toy Reviews, Toys, Transformers and tagged Botcon, Botcon 2015, G2, G2 Starscream, Generation 2, Generation 2 Starscream, Generation Two, Generation Two Starscream, Starscream, Subscription Service, Subscription Service 3.0, Toys, Transformers, Transformers Collectors’ Club. Bookmark the permalink.