Devastator comes with his three part chest armor and two part gun.  Some of these might be used for weapons for the individual robots.  Unfortunately, neither the box or the instructions show who is supposed to get these weapons.  Yet another screw up by Hasbro.  How fucking hard is it to show weapons on the instruction sheets?  What moron thought not putting use of weapons in the instructions made sense?  Fucking idiots.  He also comes with the Devastator forearms/fists/weapons, but those are actually shown as belonging to specific toys.

Robot Mode: Bonecrusher has an amazing head sculpt.  Perfect G1.  Overall he looks great.  I’m just not crazy about the design of his hips.  The two halves don’t lock together very well and tend to come apart when you move his legs.  He is one of only two of them to actually have weapons in robot mode.

Vehicle Mode: You may notice that I have Hook transformed slightly incorrectly.  The base of the crane arm can be slid over in the middle of the vehicle.  I like Hook’s vehicle mode, though I’m not crazy about the big purple box in the middle.  Since his chest and hands are separate parts, I don’t know why they felt the need to incorporate Devastator’s head into Hook.  I’m not crazy about the lack of a real hook or telescoping arm.  Seems they went really cheap here.  He also needed more paint apps.

Robot Mode: In robot mode Hook is spot on perfect G1.  Absolutely amazing job.  He might be my favorite of them all. 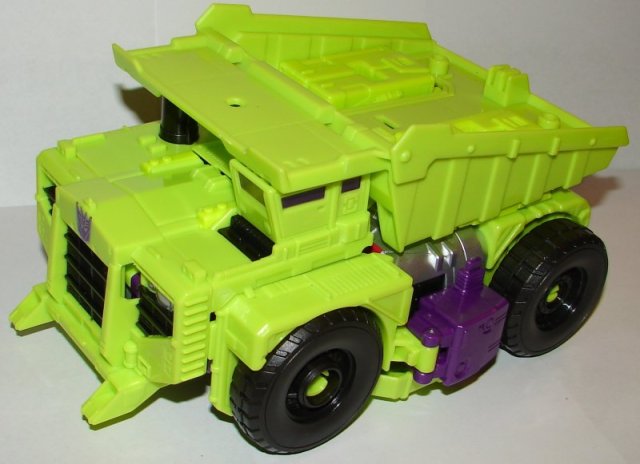 Vehicle Mode: Long Haul is billed as a Voyager, but he is so big that he’s closer to Ultra Class.  His truck mode is really hell done.  It’s too bad they didn’t make the outside of his arms look more like fuel tanks.

Robot Mode: In robot mode Long Haul looks pretty cool, even if he is a huge departure from G1.  His head sculpt is great.  My only complaint is his arms.  I don’t care about the elbows which everyone seems to be complaining about online.  I just care that his arms aren’t straight and have that silly looking angle in them. 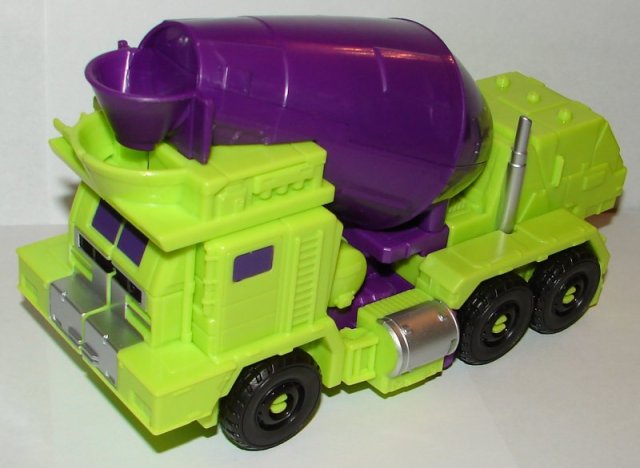 Vehicle Mode: Mixmaster’s vehicle mode is my least favorite of all six.  He looks nothing like G1 Mixmaster and seems to have a cab on both ends.  It looks really stupid.

Robot Mode: In robot mode though, he is pretty close to G1.  He even has guns on his forehead.  Really nice considering how bad his vehicle mode is.

Vehicle Mode: Scavenger could not be anymore perfect in vehicle mode.  They did a really amazing job on him, but he needed some more paint apps. 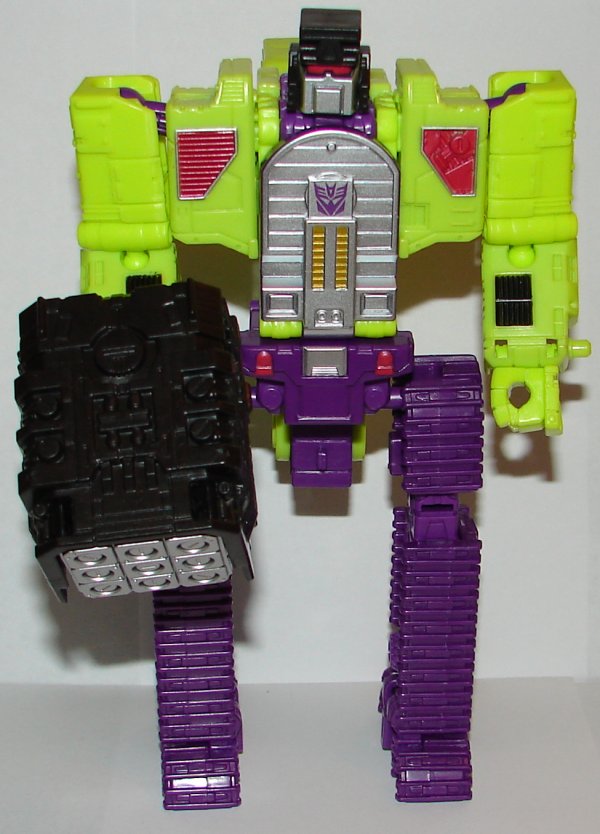 Robot Mode: Scavenger looks fantastic in robot mode.  His paint apps are fantastic and they did a get job making him look like G1.  He, like Bonecrusher, has his own weapon that Becomes Devastator’s fist. 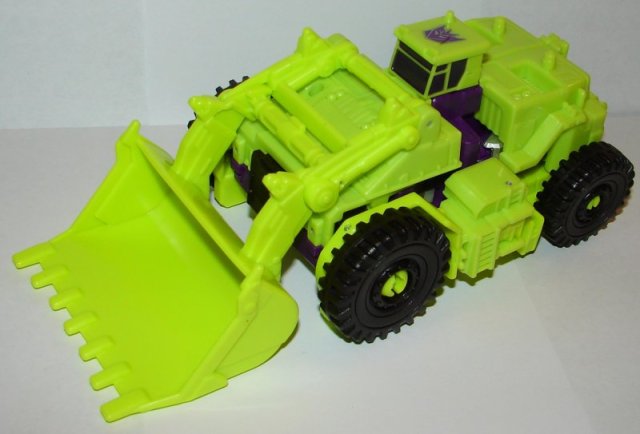 Vehicle Mode: Scrapper is a bit of a departure from the G1 vehicle mode, but still looks great.  He really did need more paint apps.  Like Bonecrusher he is almost all green lacking the purple of most of the others.

Robot Mode: Scavenger’s robot mode is perfect.  Can’t complain about anything.  He looks like a perfect G1.  I have absolutely no problem with his lack of elbows.  He didn’t need them, and Devastator is probably more stable when combined than the Japanese version that has elbows will be.

Combined Mode: Devastator looks amazing.  I would have preferred purple forearms and fists, but it’s not a huge thing to me.  His left foot is small and out of place since it doesn’t look like the front of Mixmaster.  Again, not a huge issue.  There is an awful lot of engineering needed to give him knees, and frankly I think he could have done without them.  The one thing that bothers me is how hard he is to combine.  It kind of takes forever.  One thing I like about G1 combiners is how easy they are to combine.

Overall: While he looks great, he lacks needed paint apps or stickers, weapons for the individual robots, and armed vehicle modes like the G1 has.  The SDCC version will correct some of this.  The Japanese version will correct more.  The one thing that can’t be denied is that they focused on making G1 accurate robot modes that were spot on with everyone except Long Haul, and he still looks good.  Mixmaster’s vehicle mode is a complete failure.  Hook isn’t perfect, but he’s not awful in vehicle mode.  This is a really good Devastator.  Unfortunately, he could have been the greatest non Masterpiece Transformer ever, and he’s just not.  The Japanese version has a chance to be, but there are certain things they can’t fix, like entirely replacing Mixmaster with a better toy.  In the end, my guess is that the Japanese version will be the best one, but it sucks that it was so close to perfect, and they just didn’t go the extra mile.

I’m 36 years old, and I work in network tech support for a public school system. I am a huge fan of Star Trek, Transformers, Harry Potter, and Marvel Comics as well as numerous other fandoms. I’m a big sports fan, especially the Boston Red Sox and the New England Patriots. I collect toys (mostly Transformers but other stuff too), comic books, and Red Sox baseball cards. I watch an obscene amount of television and love going to the movies. I am hopelessly addicted to Wizard Rock and I write Harry Potter Fanfiction, though these days I am working on a couple of different original YA novels.
View all posts by lmb3 →
This entry was posted in Toy Reviews, Toys, Transformers and tagged Bonecrusher, Combiner Wars, Devastator, Generations, Hook, Long Haul, Mixmaster, Scavenger, Scrapper, Toys, Transformers, Transformers Generations. Bookmark the permalink.