In Hasbro’s infinite idiocy, it appears that none of the 2015 Kre-O toys will be available in the USA, but are available in Canada.  Canadian ebay sellers are loving it, jacking up prices on them, but it sucks shift for the rest of us.  If the stores don’t want to sell them, then either cancel them completely, or sell them through their web site.  Hasbro’s inability to use their web site to sell things that stores don’t want is mind boggling, truly idiotic.  There is no excuse for not releasing an entire line in the USA.  Fuckheads.

The really sad part is that Hasbro has finally figured out how to make Kre-O toys that don’t suck (for the most part).  No more big clunky sets where you need to build your vehicle then take it apart and build your robot.  Battle Changers now actually transform, and the RID construction sets are mostly vehicles being used by the Kreons, as they always should have been.  Though let’s not talk about the Kreon Warriors.  Someone was on an awful lot of crack when they came up with those. 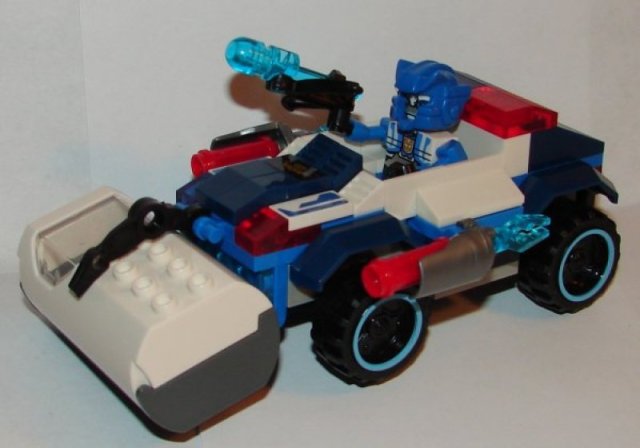 The set includes Kreons of Strongarm and Springload.  Strongarm, like all Kre-O RID Autobots has art on his back as well as his chest, and he looks really nice.  Springload looks okay, but of course, he doesn’t even vaguely resemble him from the show.  The set also includes a pod that doubles as a trap for Kreons.  Strongarm’s vehicle is pretty cool.  I wish it looked more like Strongarm though.  I don’t understand why Bumblebee and Optimus Prime you actually build their alternate modes, but Strongarm just gets a vehicle I her colors.

Overall: At the prices these are going for, it’s really hard to recommend them.

I’m 36 years old, and I work in network tech support for a public school system. I am a huge fan of Star Trek, Transformers, Harry Potter, and Marvel Comics as well as numerous other fandoms. I’m a big sports fan, especially the Boston Red Sox and the New England Patriots. I collect toys (mostly Transformers but other stuff too), comic books, and Red Sox baseball cards. I watch an obscene amount of television and love going to the movies. I am hopelessly addicted to Wizard Rock and I write Harry Potter Fanfiction, though these days I am working on a couple of different original YA novels.
View all posts by lmb3 →
This entry was posted in Toy Reviews, Toys, Transformers and tagged Kre-O, Robots in Disguise, Springload, Strongarm, Strongarm Capture Cruiser, Toys, Transformers, Transformers: Kre-O, Transformers: Robots in Disguise. Bookmark the permalink.