Back in the good old days of G1, HG Toys made all kinds of Transformers novelty items.  Stamp Bots were a fairly simple item, a small unarticulated transformers figure with a rubber stamp and self inking cap on the bottom.  There were four characters, Optimus Prime, Jazz, Wheeljack, and Starscream.  However, as I have recently discovered, Stamp Bots are anything buy simple when you start looking at the variations.  I am making a lot of assumptions in this blog, but they are all based on the available evidence.

Stamp Bots seem to have been released in three waves.  Wave one and two single packs and deluxe sets have the same packaging, but some paint and cap color changes.  Wave three is completely different in packaging and paint.  Let’s look at the single packaging first.

On the left is a wave one or two Stamp Bot, on the right is a wave three Stamp Bot.  The obvious difference is that the bubble is packed on the opposite side of the card.  Oddly my wave one and two Stamp Bots have clear bubbles, while my waves threes are all yellow.  Clearly the newer plastic on wave three was a bad batch.  The card art has been reversed.  The yellow line of text at the bottom was removed from wave three, as was the “Collect Them All” and “Non-Toxic-Washable” lines.  Both cards are dated 1984.

Wave one and two had a barcode on the front and blank white card backs.  Wave three has a gray card back that is printed with line art of all four stamps and the barcode.  The only way to tell which came first, and why I’ve numbered the waves as I have, is the numbering in the upper left corner of he front of the car.  413 is on wave one and two cards, but wave three has 2-413.  The barcode is also changed from wave one and two to wave three.  Wave one and two barcodes are 4213904134, while wave 3 is 4256602413.  I know nothing about how barcode numbers are assigned, but I am guessing the lower number came first.

Now that we’ve established the packaging differences on the single carded Stamp Bots, let’s look at the stamps themselves.

Note the paint on Wheeljack’s chest.  Wave one is off center and wave two is properly centered.  I’m going to come back to this later, as it makes things very confusing. 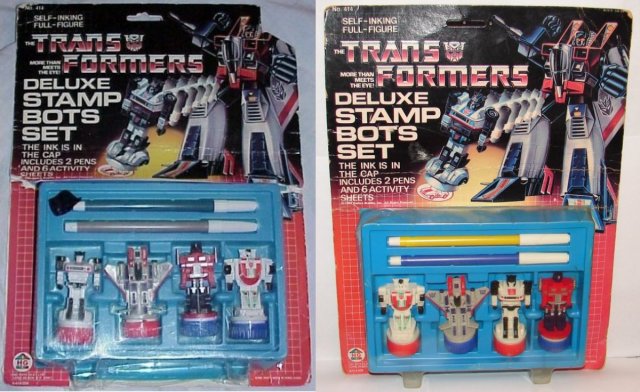 The deluxe sets follow a similar pattern as the singles.  Wave one and two have the same color tray and same card back, but wave two has Wheeljack and Starscream’s cap switched just like the single carded figures.  They have different color markers, but I have a feeling these were put in pretty randomly, so I wouldn’t necessarily consider that a variant (or there might be dozens of variants).  Note that both of these have off center paint on Wheeljack’s chest.  More later on this. 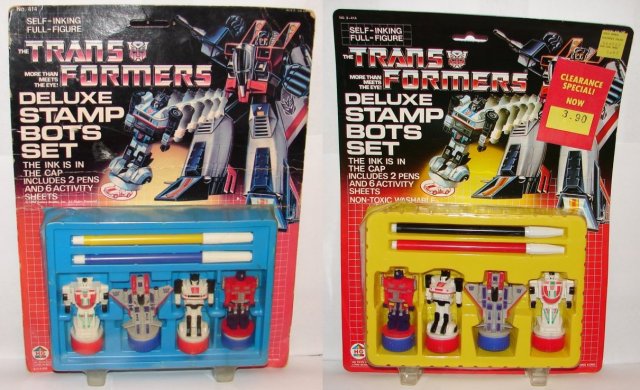 They also have different barcodes with the wave three having the higher number. 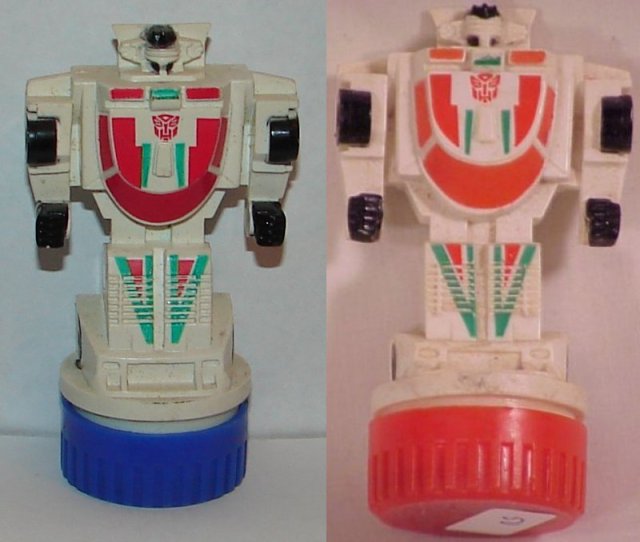 The Wheeljack stamp makes the whole thing complicated.  As of now, I’ve never seen a packaged Wheeljack stamp with a blue cap and centered art on his chest leading me to believe that sometime after the cap color change (or during wave two’s production) they realized that Wheeljack’s chest was not being painted properly and fixed it.  I have wave two single carded Wheeljacks with centered and off center paint on his chest.  As my wave two deluxe sets have bad paint, I assume there are also wave two deluxe sets with centered paint on his chest.  I can’t be sure until I find one, but it seems a reasonable assumption given the evidence.  (Note, the difference in red color is due to flash/camera as these pictures were taken years apart.  This is true in a lot of pictures.) 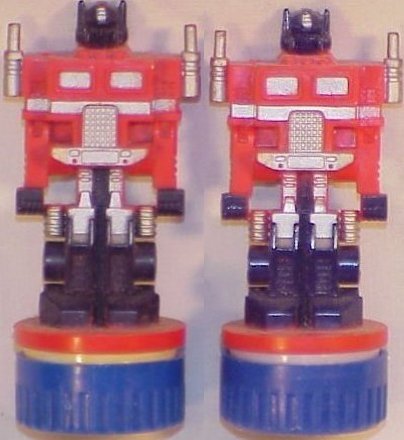 Wave one and two Optimus Prime had purple paint while wave three had blue. 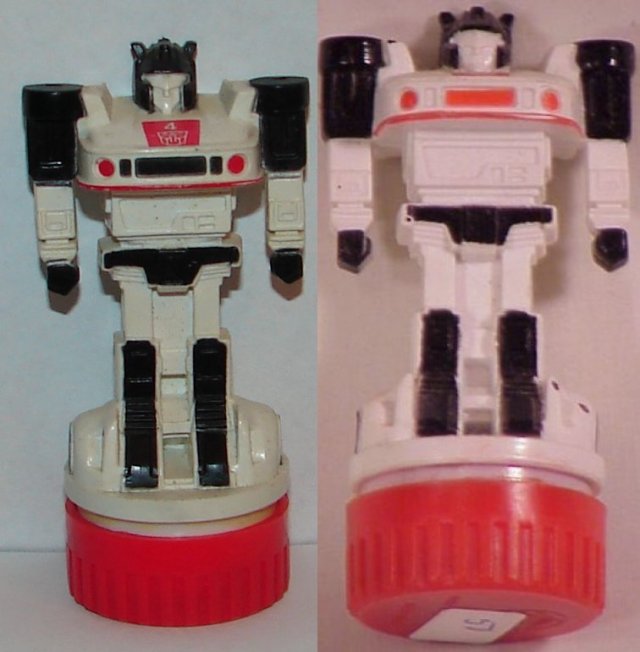 Wave one and two Jazz had a black grill that spanned from headlight to headlight.  Wave thee only had the center area of his grill painted, and it was painted orange.

I’m sure that this is a lot of information to digest, but if you’re actually still reading this blog, here is my Complete Visual Guide to HG Toys Transformers Stamp Bot Variations.

There are pictures of all of the variations accept the three I am missing.  Here they are in case you happen to have them for sale:

2. Blue cap Starscream on a card with the barcode on the front, MOC.

3. Deluxe Stamp Set with a blue tray, blue cap Starscream, and a red cap Wheeljack with centered paint on his chest, MOC.

There are a few more Stamp Bot items I have.

This Optimus Prime Case came with 2 of each Stamp Bot.  Unfortunately, I can’t get to mine so I don’t have pictures of the inside.  More importantly, I don’t have one in the box.  Since the stamps are almost certainly not visible in a sealed box, there would be no way to know for which ones come with it, and in a loose set, the caps could have been switched.  Unless I can find two boxed, I won’t be able to find anything more about this, and given it’s rarity, that’s not going to happen anyway. 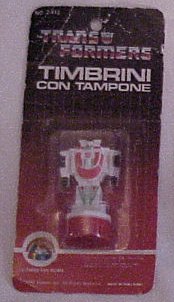 These two are from Italy.  No idea if they made the other two in Italy, and I wouldn’t even hazard a guess as to variants.  (Nor do I want to.)

HG Toys made a few other stamp items that were not Stamp Bots.  If there are any variants on these, I don’t know about them. 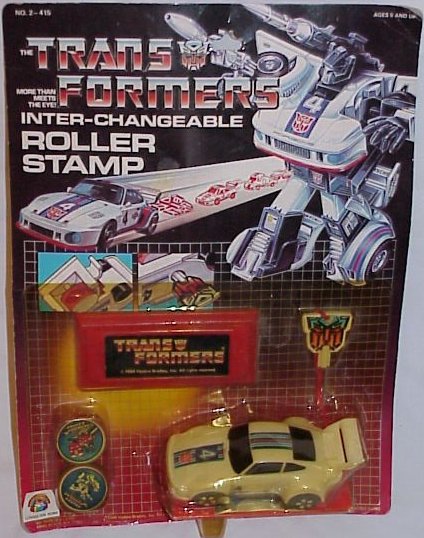 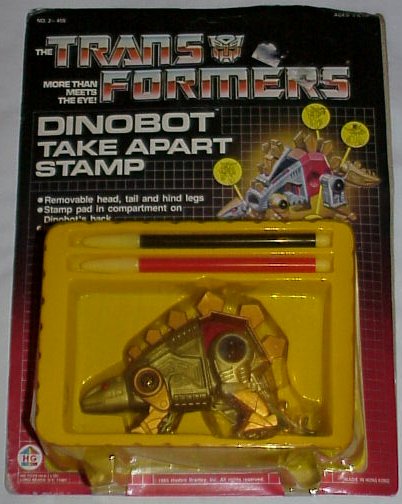 I’ve had this one for a long time.  I think I got it at Botcon 1996.  The Dinobot Take Apart Stamp is pretty cool looking and a very G1 accurate Snarl.  You can take off his tail, head, and hind legs and use an inkpad stored in his back.  This item is a favorite of mine.

While not made by HG Toys, we got this stamp item in Generation 2.

Stamps were not limited to the USA.

These are also called Stamp Bots (I am pretty sure), but are not made by HG Toys.  These are from Japan (obviously), Optimus Prime and the obligatory repaint into Ultra Magnus.  I picked these up at Botcon 2004.  They actually transform, but I don’t have pics of them in vehicle mode, and I can’t put my hands on them at the moment.

Well, that’s it.  I hope someone out there has use for all that Stamp Bot variation information.  If not, well, at least it exists somewhere.

As always, you can find over 11,500 Transformers merchandise items and collectibles at TFMuseum.com.  I have just done a major update, including a new format for listings that will hopefully make it more readable.

I’m 36 years old, and I work in network tech support for a public school system. I am a huge fan of Star Trek, Transformers, Harry Potter, and Marvel Comics as well as numerous other fandoms. I’m a big sports fan, especially the Boston Red Sox and the New England Patriots. I collect toys (mostly Transformers but other stuff too), comic books, and Red Sox baseball cards. I watch an obscene amount of television and love going to the movies. I am hopelessly addicted to Wizard Rock and I write Harry Potter Fanfiction, though these days I am working on a couple of different original YA novels.
View all posts by lmb3 →
This entry was posted in Toys, Transformers, Transformers Artifact of the Week and tagged G1 Stamp Bots, Generation 1, Generation One, Jazz, Optimus Prime, Rubber Stamps, Snarl, Stamp Bot, Starscream, Thrust, Toys, Transformers, Ultra Magnus, Wheeljack. Bookmark the permalink.