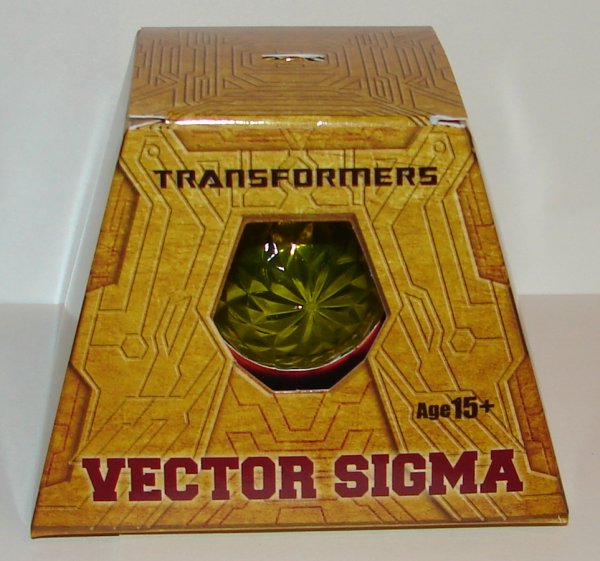 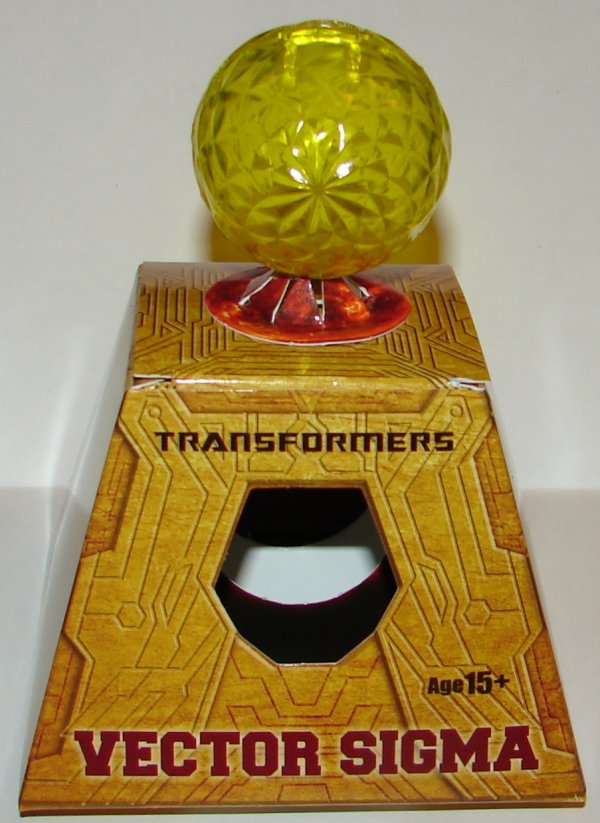 The Vector Sigma and Key to Vector Sigma set is an add on to the Asian reissue of the USA version of Masterpiece Optimus Prime.  It’s a simple cardboard box base with a cardboard ring that sits on top.  The cardboard ring is solid on the outer ring, with the inside cut into wedges.  You bend the wedges upward to support the hard plastic yellow globe.  This works okay, but the ring is just cardboard and if you don’t bend the wedges just so, the sphere won’t stay in place.

It also comes with a gold die cast metal Key to Vector Sigma.  Unfortunately, while die cast metal is usually a great thing, the weight makes it difficult to insert into the top of the sphere and still get it to sit on the cardboard ring.  All this needed was a simple plastic ring with a ridge to hold the sphere in place.  It would have been so simple and made this 1000 % better.

As is, it’s cool, but you really can’t leave it displayed as the weight of the sphere will likely bend the cardboard ring over time.  It really is pretty cheap that they didn’t bother do such a small thing.

I’m 36 years old, and I work in network tech support for a public school system. I am a huge fan of Star Trek, Transformers, Harry Potter, and Marvel Comics as well as numerous other fandoms. I’m a big sports fan, especially the Boston Red Sox and the New England Patriots. I collect toys (mostly Transformers but other stuff too), comic books, and Red Sox baseball cards. I watch an obscene amount of television and love going to the movies. I am hopelessly addicted to Wizard Rock and I write Harry Potter Fanfiction, though these days I am working on a couple of different original YA novels.
View all posts by lmb3 →
This entry was posted in Toy Reviews, Toys, Transformers and tagged Key to Vector Sigma, Masterpiece, Optimus Prime, Toys, Transformers, Transformers Masterpiece, Vector Sigma. Bookmark the permalink.