At long last, our Decepticon cassette collection is complete! I’ll get to Rat bat at the end of the review. Read my reviews of Masterpiece Soundwave for details on this mold. I will focus on the color changes on Soundblaster.

Soundwave came with a grid pattern plate that can plug into the outside of his door. Soundblaster comes with a translucent purple one that also has the Decepticon logo on it. This means that they did not put the logo on the actual red door on his chest. Since Soundblaster is supposed to have a red door, this absolutely sucks. Why they did it this way makes no sense, and takes a lot away from the toy. (More on this later.)

This makes no sense. Why do Megatron in translucent red? They could have done a black and brown Megatron, that would have been really cool, or maybe do a gray Megatron rather than a silver one (the original Japanese Megatron was gray not silver). This just seems like they went cheap by not having to paint him. 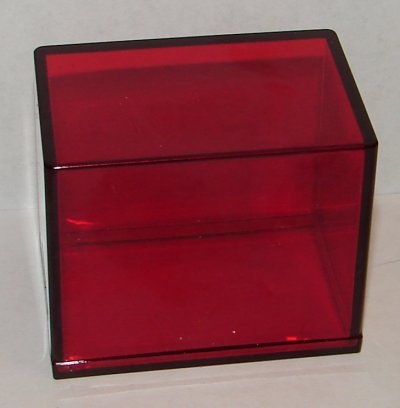 I don’t know why they did it in red. Energon cubes were always clear and then pink or sometimes rainbow colored. I don’t recall them ever being red.

Other than the obvious change, the blue to black, he’s also had a couple of paint app changes. The light blue “L” shaped painted areas on each side are now silver in cassette player mode. It looks fine, but I think the blue would have looked okay too.

In robot mode Soundblaster has had one paint app change, his feet are now black instead of silver. I kind of like this change. One of my few issues with the original Soundwave was that he didn’t have black feet. Now, they have (correctly) changed his tape door to red like it’s supposed to be, but they failed to paint the ridge around the door gold. They also omitted the Decepticon symbol. So, if you want him to have the gold border and logo, you need to put on the attachment, which gives him a purple door instead of a red one. This was a major screw up. I’m not at all happy with this toy’s color choices for him and his accessories. There is another small change in color. The clear plastic tabs on his wrists to connect the birds are now translucent red. That’s not really a big deal, though it now better matches the red stripe, so I guess this is an improvement, though not one that they really needed to make.

Talk about screw-ups. While all the other cassettes came with red cases, Ratbat comes with a clear one. So, all the cassettes can’t even match.

Ratbat himself is great. He’s got wonderful paint apps, and I love his head sculpt. They did a great job incorporating his weapon into the cassette. That might be the most impressive thing about all the animal cassettes is incorporation of the weapons. They did have to change the shape of his weapons a bit, keeping his weapons but removing the guns on top. It would have been nice to have them look a little more like G1, but it’s not bad.

Overall, Sounblaster is nice, but he has some fundamental flaws though. Is he worth $160 just to get Ratbat? As someone who loves G1 Japanese toys, yes, absolutely. If you’re only in it for Ratbat, it might be a little much.

I’m 36 years old, and I work in network tech support for a public school system. I am a huge fan of Star Trek, Transformers, Harry Potter, and Marvel Comics as well as numerous other fandoms. I’m a big sports fan, especially the Boston Red Sox and the New England Patriots. I collect toys (mostly Transformers but other stuff too), comic books, and Red Sox baseball cards. I watch an obscene amount of television and love going to the movies. I am hopelessly addicted to Wizard Rock and I write Harry Potter Fanfiction, though these days I am working on a couple of different original YA novels.
View all posts by lmb3 →
This entry was posted in Toy Reviews, Toys, Transformers and tagged Masterpiece, Masterpiece Ratbat, Masterpiece Soundblaster, Masterpiece Soundwave, Ratbat, Soundblaster, Soundwave, Toys, Transformers, Transformers Masterpiece. Bookmark the permalink.